For over three decades now, Kristian Alfonso has been delighting Days of Our Lives’ (DOOL) fans with her portrayal of Hope Williams, the feisty and beautiful police officer that is always looking to seek justice in Salem. Alfonso is gorgeous, talented, and truly a soap opera legend. Digging deeper into her life, however, there is so much more to this actress than what most fans think. As such, below are 10 things you may not have known about DOOL’s Kristina Alfonso.

As a young girl, Kristian Alfonso had dreams of becoming a figure skater. She even won the gold at the Junior Olympic Figure Skating Championships. Sadly, a tobogganing accident shattered those skating dreams at the age of 13. She was able to use her figure skating talents as part of a DOOL storyline in 1985 where her Hope character was placed on a special undercover assignment as a figure skater.

After her figure skating career ended, Alfonso pursued modelling. At the young age of 15, Alfonso had already appeared as a cover girl for more than 30 publications including Vogue, Harper’s Bazaar, Glamour, and Seventeen. She made her television debut in 1981 In the made-for-TV movie, The Starmaker, along with Rock Hudson.

Many fans who meet Alfonso in person are sometimes shocked at just how petite the beautiful actress is. At 5’4” one would think that this could’ve affected her modeling career. As you can read from the above, it didn’t affect her one bit. Judging from her career highlights, it did not affect her when it came to acting jobs as well.

As many Days‘ fans are aware, Alfonso began playing Hope Williams in 1983. What some may not be aware is that the soap had asked her to audition for the show two years earlier in 1981. Unfortunately, Alfonso was not ready to move to LA at that time and leave her parents behind. As she was modeling at that point in time, she decided to continue on that career path. As such, Tammy Taylor moved into the role, playing Hope as a teenage girl. Two years later, Kristian took on the part and turned it into an iconic DOOL character.

Like many soap opera stars, Alfonso had primetime aspirations and would leave DOOL in 1987 to pursue these opportunities. She landed a role on the primetime drama Falcon Crest, playing Pilar Ortega for about two years. Kristian has also had guest roles on other shows like Full House; Baywatch; Melrose Place; Murder, She Wrote; and Who’s the Boss. Fans of the comedy Friends may also remember Alfonso’s guest spot in season 6 where she played her Hope Williams’ character.

In 1993, Alfonso was cast in the movie Joshua Tree and worked with Hollywood action star Dolph Lungren. When the actress realized she’d have to do a nude scene, she panicked. Thankfully she and her manager were able to convince film producers to hire a body double, as she wasn’t able to move forward with shooting these parts herself.

The love story between Bo and Hope over the years brought DOOL audiences to their knees. Much like every ‘80s soap opera couple, Bo and Hope had a (cheesy) signature love song. Their romantic anthem was James Ingram’s “Whatever We Imagine.” Interesting enough, Ingram just happens to be Alfonso’s favorite singer. Additionally, her favorite band of all time is The Gypsy Kings.

Hope and grandmother Alice Horton had a beautiful bond on DOOL. Life imitated art in this sense, as the late and great Frances Reid would end up being Kristian’s mentor when she entered the land of Salem in 1983. Reid gave her a solid piece of advice in her early years, telling Alfonso that she needed to do more than just say her lines, adding that she needed to look and think about them.

Working on a soap opera can be grueling. Long hours, long days, having to learn your lines at the drop of hat; these things can take their toll on an actress. What’s Kristian’s biggest acting challenge? In a March 2017 interview, she relayed that crying was a hurdle for her. As she put it, “It’s like getting water from a stone. I have to dig really deep and go to that very dark place and stay there for such a long time.”

Crying may not have been too hard in late 2005 when Alfonso had to tape scene’s around Hope losing her son, Zack. As a mom of two boys, and a stepmom to another son, having to live through scenes of losing a child must have been quite difficult. So much so, Alfonso had stated in the past that this storyline was the hardest to play in the over three decades that she had been on DOOL. 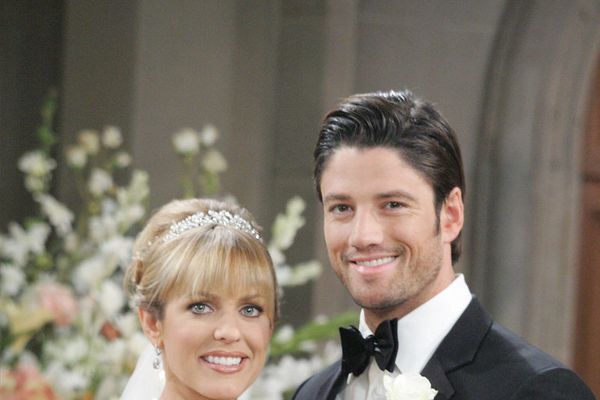