John Krasinski and Emily Blunt are by far one of Hollywood’s cutest couples. Both of their careers have been on the rise since they started dating back in 2008, and it seems their family is too! They welcomed their second daughter, Violet, in July 2016, and are already parents to Hazel. Emily and John are never short of compliments when gushing about each other in the press, so we’re curious to learn more about them! Here are 10 things you probably didn’t know about John Krasinski and Emily Blunt’s relationship!

The Office alum went on The Ellen DeGeneres Show back in 2010 and admitted that when he met Emily Blunt he wasn’t actually looking to be in a relationship, but he kind of just fell for her right away. “It was one of those things where I wasn’t really looking for a relationship and I was thinking I’m going to take my time in L.A. Then I met her and I was so nervous. I was like, ‘Oh God, I think I’m going to fall in love with her.’ As I shook her hand I went, ‘I like you,'” he joked. He said Blunt told him it was love at first sight for her as well!

Their first date was not the typical dinner and a movie kind of date. Instead, John Krasinski took Emily Blunt to a gun range! In an interview with Conan, he said: “On our first date, I decided, ‘I’m gonna really hit the gas and bring her to a gun range.’ I think that I was so sure that I would never end up with her…that I was like, ‘You know what, I’m gonna blow it right away and then that way you don’t feel bad,'” he joked.

In an interview with Glamour, Krasinski admitted he was a big fan of Emily’s work before they started dating: “Before I met Emily, I had seen that movie–because it’s on TV all the time…We had only been dating a couple of weeks, and she stopped by…and I didn’t know she was stopping by, so when she opened [the door and came in], I quickly flipped the channel. I’m sure she thought I was watching something inappropriate…Later on in our relationship, she asked if I had seen The Devil Wears Prada and I said, ‘Yes,’ and she said, ‘How many times?’ And I said, ‘A lot.’ She said, ‘What’s a lot?’ And I said, ’75 times.’ I’m lucky enough that she stayed with me and didn’t realize that she had really married her stalker!”

In an interview with Access Hollywood, John Krasinski revealed how he proposed to Emily. He said it was in a very casual setting, but the moment did reduce her to tears. “I was nervous and the whole nine yards. She did cry after I cried and we cried and then everyone around us was crying. Then, I think people weren’t really sure what was going on, but they were crying because we were crying. But it was great. At the end of the day she said yes which is great. It’s a big part of this whole thing,” said Krasinski.

Blunt and Krasinski already have two children, a daughter named Hazel, 3, and Violet, 1, but Blunt hinted there might be even more children on the horizon for these two! Since Emily and John are both from big families, she predicts they’ll mimic the same in theirs. “I’m from a big family and John is one of three so I think we definitely would [have more],” said Blunt in an interview with the Telegraph.

Emily Blunt and John Krasinski used to live right across the street from Jimmy Kimmel and his wife, Molly McNearney until they sold their Hollywood Hills home to move East. Prior to their move, the two couples were fairly close and used to spend evenings together at each other’s houses. They were also engaged in a very public holiday prank war! The tradition involves the two families trading pranks each year like when Emily and John gift wrapped Kimmel’s SUV and filled the car with hundreds of ornaments! Many of the pranks can be seen on the Jimmy Kimmel Live! Youtube channel.

In an interview with Modern Luxury, Blunt found it hard to sum up what married life was like with John Krasinski, not for any negative reasons, but rather because there were no words to describe how happy she is: “This is what I find difficult about talking about my marriage: It’s hard to sum up something that’s so vital and means everything to you in a soundbite. Do you know what I mean? All I can say is that it’s an effing blast. It’s just great, and I’m so happy.”

The cute couple got married on July 10, 2010, in Como, Italy. Lucky for them, they have some pretty sweet connections in Hollywood. Emily Blunt and John Krasinski are good friends with George Clooney! So when Clooney offered up his private estate for their wedding, of course, they agreed. It was a private outdoor ceremony at the Villa d’Este with some pretty A-list guest like Elisabetta Canalis, David Schwimmer, Stephen Merchant, Meryl Streep and Matt Damon.

It’s pretty clear from reading interviews with John Krasinski and Emily Blunt that these two are both pretty hands-on when it comes to raising their kids, but they also take the time to enjoy each other which is something that parents sometimes struggle with. “But at the end of the day, it’s important to preserve your relationship. It’s really fun because I have an amazing wife who also will go out on dates with me. We do one date a week at least where it’s just us. Just go to dinner and talk, it’s really easy. We don’t need much. We just go to dinner and talk and have no baby talk,” said Krasinski. 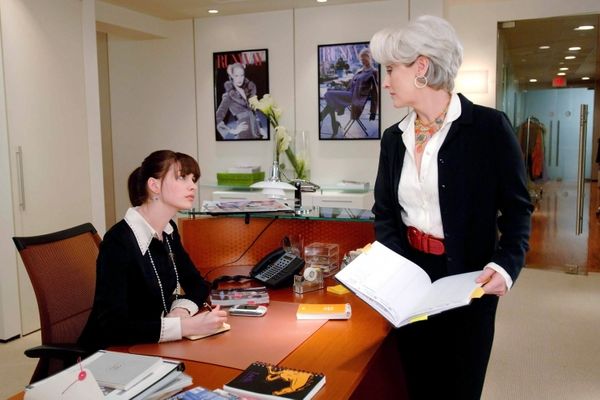 Cast Of The Devil Wears Prada: How Much Are They Worth Now?