Eric Church is an extremely unique country singer. He’s one of few country artists who have successfully carved out their own genre — he’s combined a mix of rock n’ roll and country. He fits in with such a different mix of artists; for example, he was personally hand picked by Metallica to play at their Orion Music Festival and also asked to play at Lollapalooza. He’s just a jack of all trades! Despite being a huge star, Eric is also very elusive with no personal social media accounts or engagement with the press with interviews. It’s clear he’s pretty protective of his personal life, but we’ve done some digging on the artist and found a few interesting facts! Here’s 10 things you might not have known about Eric Church:

Eric Church was born Kenneth Eric Church. His nickname is “Chief” which also happens to be the name of his 2011 studio album. Chief hit number one on the Billboard Hot 100 making him the first country artist to have an album in the number one spot without ever having a number one song on the country charts! The only other artist to do that was Tim McGraw in 1994. The name “Chief” comes from his maternal grandfather who was also nicknamed Chief.

The Chief getting ready to rock in Austin

Eric Church stands out in the country genre because of his unique sound, but that’s what makes him special and even more successful. However, back in the day when he was younger, he said those kinds of things made him an outsider. The name of his 2014 album, The Outsiders stemmed from that feeling of isolation. On his website he wrote, “I’ve always felt like an outsider, and I still feel that way. That chip on your shoulder becomes a source of strength, and it drives you to push forward.”

8. His Favorite Guitar and Drink

Eric bought his first guitar when he was only 13-years-old! In an interview with the Pittsburgh Post-Gazette, Church said his favorite guitar is his Martin because it’s got a rich history. “My Martin that I wrote all of my songs on for my records. It has a real history. I split it in two with Dierks Bentley, and it had to be put together again. Then it was with me when I got fired from the Rascal Flatts tour. It has been everywhere and seen everything.” Another favorite of Eric’s is a cold drink of course, but more specifically a shot of Jack Daniels. He likes this whiskey so much they even custom make his own bottle with a medallion of his face around the bottle neck. Do a quick search on Ebay and you’ll find some empty autographed bottles!

Eric Church got his bad boy reputation early on in his career for having big rowdy shows. When he first started out back in 2006, he got the opportunity of a lifetime to open for Rascal Flatts on tour. This didn’t last long though because he was quickly kicked off the tour after he continuously played over his allotted set time. It seems now that Jay DeMarcus, Gary LeVox and Joe Don Rooney don’t hold a grudge against Church, but at the time it was “disrespectful.” According to Rascal Flatts he would play late, making them go on late and forcing crews to work longer and the tour would have to pay overtime to the union crews each time it happened. They gave him four warnings, but he refused to comply when they played at Madison Square Garden and so he got the boot! But it all worked out in the end because Taylor Swift was asked to replace him on tour and it surged her singing career forward and now she’s one of the biggest stars in the world!

In high school he had a regular gig performing Jimmy Buffet covers in a local bar. He was actually offered a record deal when he was only 16-years-old, but he turned it down. He made a deal with his father that if he went to college and got a degree, his father would fund his first year in Nashville pursuing music. Eric graduated from Appalachian State in North Carolina with a degree in marketing. While he was in college he formed a band called the Mountain Boys. When he graduated he moved to Nashville to pursue music, and his father held up his end of the bargain by paying for his living expenses. He started out as a songwriter but soon landed a record deal in 2006 and produced his first album, Sinners Like Me.

Eric is now happily married to Katherine Blasingame and has the full backing of his family, but when he first started out not everyone was supportive of his musical career. After he graduated college, Eric was engaged. He broke off the engagement when her father tried to talk him out of pursuing a career in the music industry. Eric’s now a mega-country star and is definitely having the last laugh now!

Any fan of Eric Church will know that he’s never caught without his signature aviator sunglasses. Since he’s developed this new look, we rarely ever get a look at Eric’s face. In an interview he was asked about it he said he wears them to keep his contacts from frying. The bright lights from his shows and on the red carpet hurt his contacts so he wears sunglasses to protect them from irritation.

Eric’s bad boy reputation for playing long sets and never rushing a performance might have gotten him a bad boy reputation in the beginning of his career, but it’s also because he cares a lot about his fans and never wants to let them down. He told the Rolling Stones in an interview once, “When we go out there, I want to be the act that, no matter who’s in that crowd, they’ve never seen a better act than me. I’m gonna empty the tank.” One time his entire bad came down with the stomach flu before a show and he still went out to perform because he didn’t want to cancel. He just did a scaled down, acoustic performance with just him and his guitar.

Eric might be a bad boy rock and roll artist, but at home he’s a low-key dad who’s often on diaper duty! He married Katherine Blasingame in 2008 and the two now have 2 little boys together: Boone Church, 3, and Tennesse Hawkins Church, a.k.a Hawk, who is only 14-months-old.

One of Church’s biggest hits is the song “Springsteen” from his 2011 album not only made an impact on his listeners as one of their favorite songs, but also the boss man himself! After that single was released, Bruce Springsteen reached out to Eric Church. Springsteen mailed him a set list from a Springsteen concert with a long handwritten note that said he and his family were huge fans of the song. 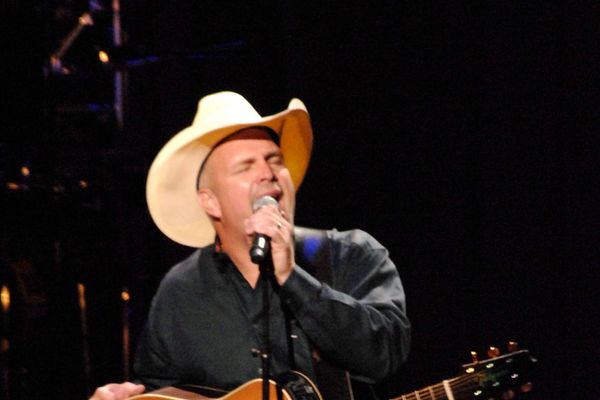