Gigi Hadid is hard not to like. She’s gorgeous, hard working and totally down to earth. She’s had a pretty privileged life with lots of opportunities, but none of it has gone to her head and we totally respect her for that. Over the last few years, her career has continued to reach new heights and it seems pretty obvious that this model has some serious staying power. Since it’s her birthday, here are 10 things you didn’t know about Gigi Hadid!

Gigi has two younger siblings, Bella and Anwar, as well as two older half-siblings on her father’s side. She also had five stepsisters from her mother’s marriage to David Foster.

She isn’t the type of person you’ll find at a club on a Saturday night. “I’m kind of a grandma, so my ideal night out is, like, a dinner. I love Nobu. I’m very into places where you can hear each other talk – a cool space where my friends can hang out and actually catch up. Then I’m usually asleep by 11,” she said.

The Victoria’s secret model has a number of high profile friends like Taylor Swift and Kendall Jenner; however, her best friend is her mom, Yolanda Foster.

She started modeling when she was two years old for Baby Guess and she continued to do this until she was 8 or 9. Her mother took her out so she could pursue other things like volleyball and competitive horseback riding.

Gigi’s knees are her biggest insecurity. “I hate my knees. I played volleyball for ten years, and I was a hitter. And you train to roll and slide so that you don’t have to land on your knees, and I was really good at that. But obviously sometimes it happened, and they got pretty banged up. I think they are permanently swollen,” she told Allure.

Gigi’s former stepfather – David Foster – was married to Linda Thompson, Caitlyn Jenner’s second wife. According to her, this makes Kendall Jenner like a sort of sister.

She isn’t one for diets. “I’m always working so it’s always the same routine,” she said. “I eat healthy when I can, I eat a burger when I want, and I work out. You have to live with the routine that keeps your body the healthiest, and that’s what I do – I don’t change it for a swimsuit shoot.”

When she goes shopping, she doesn’t try things on. “But I was into storyboarding when I was younger. I loved coming up with my own style through fashion blogs and magazines. But I’ve never liked trying things on. I don’t know why. It was more about making mood boards. I’ve loved fashion my whole life, but more the imagery of it than actually wearing it,” she told Elle.

Her real name is Jelena Noura Hadid. She got the nickname Gigi when she was a kid. “My mom was called that as a kid by her mother when she was younger, but only around the house. I was called that around the house when I was really young, kind of like how my mom was called it. In first or second grade, there was a girl named Helena and it got confusing with the teacher who had to call out our names, and so the teacher asked my mom, ‘If I needed to call Jelena a nickname, what would it be?’ And my mom was like, ‘I call her Gigi sometimes,’ and the name stuck.” 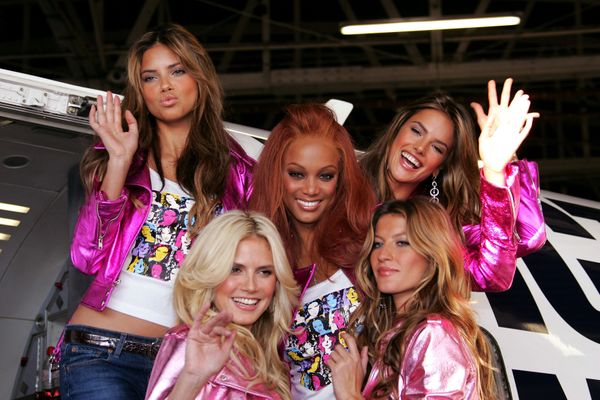