Nikki Reed and Ian Somerhalder have one of the cutest relationships in Hollywood. Despite being plagued with rumors in the tabloids, these two continue to outshine the media with their love and affection for one another. Their relationship moved quickly as the two actors fell in love, got engaged and married all within nearly a year of dating, but now they’ve been together for over four years! These two are both fiercely private with their relationship, so not much is known about them as a couple, but we managed to dig up a few fun tidbits! Here’s a look at 10 things you probably didn’t know about Ian Somerhalder and Nikki Reed’s relationship:

From the outside, it seemed like Nikki and Ian’s romance moved fast and furiously, but it appears they had been friends for a long time before they started dating. The two both ran in the same circle of friends in Hollywood as Reed was friendly with Somerhalder’s ex and co-star, Nina Dobrev. The two both dated Dancing with the Stars pro, Derek Hough. Meanwhile, Somerhalder had dated Reed’s Twilight co-star, Ashley Greene in 2009.

Ian and Nikki first sparked rumors of a romance when they were spotted going for runs together and getting cozy at an L.A. farmers market, but no one could confirm they were dating at the time. They were spotted once again out for dinner on what appeared to be another date at Craig’s in West Hollywood and in early August, Somerhalder posted a photo on Instagram sharing the news that he and Reed had adopted a horse together which confirmed the two were in fact dating.

The Vampire Diaries star and Twilight actress started dating mid-way through 2014 and were engaged six months later in February 2015 after Reed’s divorce from Paul McDonald was finalized in January 2015. They also reportedly moved in with one another after only three weeks of dating.

My new screen saver for sure… Brother @ernestoriley thanks for snapping this sweet photo of me and my better half. I am the luckiest man on earth. Literally.

One of the things Ian and Nikki bonded over when they first started dating was their love for animals. Early on in their relationship they adopted a horse named Eagle and now have 9 pets together! “We have nine, [my wife Nikki Reed] and I. We have four dogs, three cats and two horses. When I got through the names, I always sort of laugh and I kind of giggle out loud because it just sounds awesome. The horses are Millie and Eagle. The dogs are Enzo, Ira, Nietzsche and Gerty. And the cats are Moke, Thursday, and Sohalia. They are such a dynamic group of little creatures and I’m just ecstatic to be able to be a part of it all and have those babies,” said Somerhalder.

Their relationship wasn’t heavily supported by TVD fans because many were still hung up on his previous relationship with co-star Nina Dobrev. Despite rumors of animosity on set, their break-up was actually completely amicable and the two even remained friends afterward. But Ian received a lot of backlash regardless of this, so much so that he fired back in defense of Nikki and wrote: “You HATE NIKKI REED? Really? Do you know her? Hmmmm, I’m not sure that you do. Look on her Instagram feed or Twitter and all you will see is a compassionate and beautiful human being. Please put your negative energy elsewhere. You don’t even know the person you’re talking about…Do some research of the person you say sucks or you HATE. You’ll find that she’s a magical person doing great things in the world.”

Nikki Reed and Ian Somerhalder got married in an extremely private ceremony on April 26, 2015 in Malibu, California. Their wedding was so top secret not even their guests knew! Nikki and Ian invited their closest friends and family to “a housewarming party,” but upon arrival they were shuttled to Topanga Canyon where the couple exchanged vows. “We really wanted our wedding to be small, intimate, and about the two of us. We didn’t want our loved ones to show up with any expectations or squeezed into formal attire,” said Reed in an interview with Brides magazine.

9 months of amazing marriage to this amazing human. Happy 9 months my one and only human-I can’t wait for the rest. So many many many more to come and fill with memories. I love you

The theme of Ian and Nikki’s wedding did a pretty good job of reflecting their personalities. It was extremely laid back with a low-key vibe and small incorporation of their shared love of music festivals. “We wanted a Louisiana backyard-barbecue feel, with food stations and a dance floor for our closest friends and family. It really was all about the food, the dancing and the love,” said Reed. Even the cake was customized to represent Somerhalder’s southern roots!

Ian and Nikki have a lot in common, not only did they both play vampires on-screen, but they both share a passion for wildlife. Ian Somerhalder’s co-star, Kat Graham talked about some of these shared values in an interview with People: “Why I think they’re so perfect is because of their philanthropy. They have the same values when it comes to people, how you treat people, how you treat animals, how you treat the world, the environment. I mean, they’re really perfect together. I’m like, ‘Thank God you guys found each other because I don’t know what you would do without each other.’ They’re perfect.” Ian and Nikki are active in many different charities, especially the Ian Somerhalder Foundation.

For a long time, this couple was plagued with rumors surrounding their relationship with his co-star, Nina Dobrev. Things were made worse when it was announced that Dobrev was leaving the show. Tabloids spun stories that Nikki and Nina hated each other, there was animosity on the set, especially when Nikki showed up to set on a regular basis. The truth was they were all cordial. The relationship between Ian and Nina was professional and Nina left the show because she wanted to expand her career into film, not because of a feud between her and Nikki. In February 2017, fans were shocked when Nina, Ian and Nikki all posted a photo of themselves having dinner together which finally dispelled all the rumors once and for all.

For the last few years we thought addressing any baseless rumors with silence was the best way. Besides, who wants to respond to made up stories about “friends backstabbing friends”, “cheating exes”, or “cast members exiting shows” on low-brow websites like hollywoodlife that are just perpetuating trends that preceded us. Yuck. I now see that silence was taken as an opportunity to fill in the blanks with even more falsities, and juicer stories, and we, yes WE, believe we have a moral responsibility to young girls to end that narrative, because at the end of all of this, those young girls are the ones who lose. Their passion and endless devotion for a tv show is being taken advantage of, replaced with feelings of anger through divisive techniques, & even worse, their minds are being shaped & molded as their view of themselves, other girls, & what those dynamics should look like are being formed. So here’s to putting an end to all those fake stories of on set jealousy, betrayal, made-up-friendships lost & women hating women. Because at the end of the day, that’s what this is about: teaching girls that you have to hate other girls only breeds a generation of women who believe you have to hate other women. And that’s what these magazines, websites and blogs don’t understand. That is the harmful unintended consequence of their bullshit stories and we have a moral responsibility to fix that. Let’s turn this page together, as we all walk into the next chapter peacefully. And finally, let’s use this as an example of how important it is to stop this trend of writing horrible headlines about women, painting us as bitter, angry, insecure, heartbroken, childless, feuding, backstabbing monsters because whether we want to admit it or not, it changes the way all women view themselves. And shame on these websites for now targeting an even younger demographic, instilling this at an earlier age when girls are even more susceptible, more vulnerable and more malleable. When we write these headlines we teach hate. I’ve seen it firsthand. Let’s shift what we put into the universe starting now, & hopefully we will start to see a shift in the way we treat each other & view ourselves❤

1. Starting Their Own Family

Fans have been on high alert for a pregnancy ever since these two tied the knot back in 2015 and it sounds like it could be sooner than we thought! Apparently, the couple were waiting for The Vampire Diaries to end. When E! News asked Somerhalder if they planned on having kids, he replied: “Absolutely! I can’t wait. But with this schedule, living on a television show, it’s a bit difficult.” But now that TVD is over, Somerhalder’s schedule is wide open! When E! mentioned it was sad that the TVD family was breaking up, Somerhalder said, “And starting a new family.” The couple welcomed their first child together, daughter Bodhi, on July 25, 2018.

Salty…sandy…sticky…sunburned. The best. I love this human. My human. 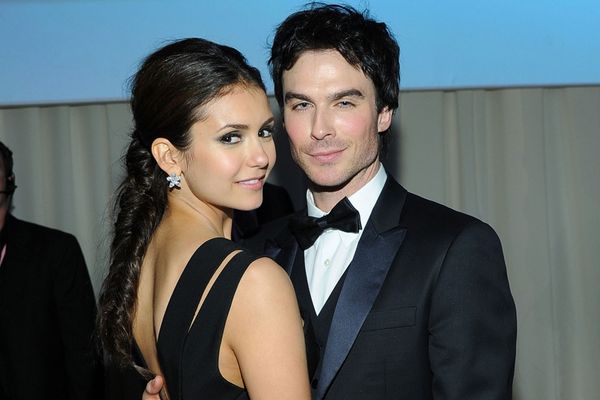