Justin Timberlake makes no secret of his love for Jessica Biel, whom he wed in 2012. Since first getting together, the two of them have been adorably cute together. From their early days of dating, to their lives as busy parents, we wanted to find out more about what makes their relationship work. Surprisingly, for being a high-profile celebrity couple, they’re more normal than you’d think! Here’s 10 things you might not know about Justin and Jessica’s relationship.

According to Justin, the story of how he and Jessica got together wasn’t all that special. The two of them started dating in 2007, not long after Justin had ended his 4-year relationship with Cameron Diaz. In a press conference with the Hollywood Foreign press, Justin recalled how they started dating. “There was nothing starry about the way we got together. It was very un-Hollywood-esque, in fact,” Justin said. “We met and got talking. Afterwards I asked my friend if I could call her and ask her out. My friend called Jessica and Jessica said yes, and so I called her.” He added, “I had to be pretty persistent in order to get her to say yes. But I have a fair amount of tenacity and if I want something I stick to it. And in the end she agreed.” The couple displayed their relationship in public for the first time at the Sundance Film Festival later that year.

The following year, Justin and Jessica got involved in politics. In October 2008, the couple spoke at a Barack Obama rally in Las Vegas, with Justin telling the crowd, “We’ve never publicly endorsed before, but we’ve never been so inspired by one person. I’m not here as some dude who writes goofy songs. Me and Jess, we’re here as Americans. We’re here as humans, because this is something we had to do.” The couple are also active with the anti-discrimination organization GLSEN (Gay, Lesbian, & Straight Education Network) and work to improve the lives of youth. 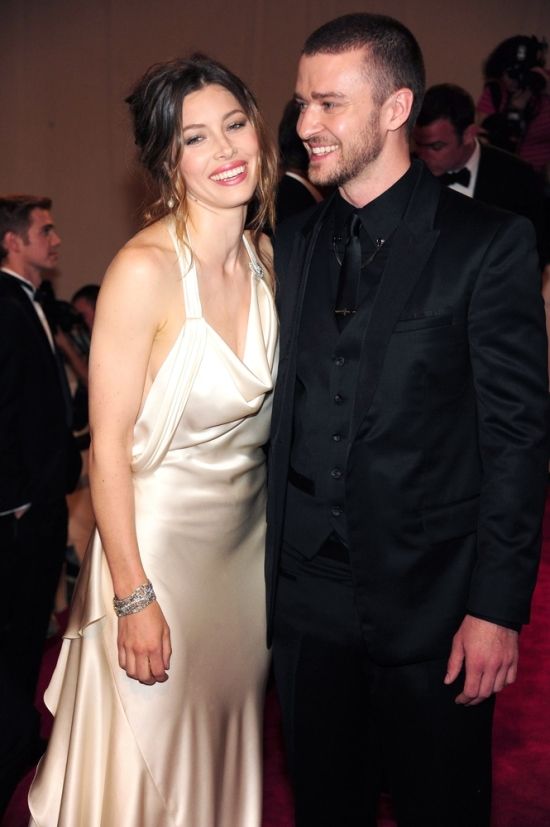 Throughout their relationship, the couple has tried to keep much of their relationship private. When asked about the details of her relationship with Justin, Jessica bluntly told Vogue, “I don’t want to talk about it. I don’t feel the need to clear anything up. It’s the most precious thing that I have in my life, and I care about it so much that I don’t care about what anyone says or thinks. I have just not addressed it in any real way, and I’m not going to. It’s mine. And I really like that about it.” 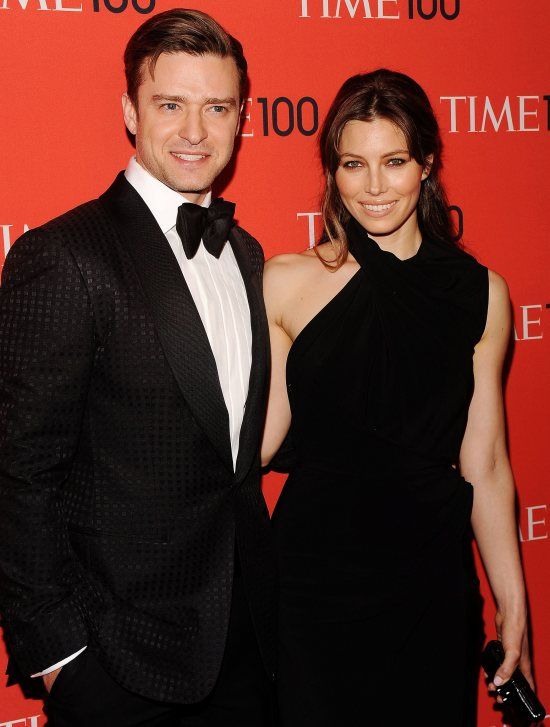 Every high-profile celebrity couple is subjected to gossip and rumors throughout their relationship, and Justin and Jessica are no exception. One of the biggest rumors to rock the couple’s relationship was the report that Justin had an affair with another actress. Several reports claimed that Justin had a 3-day fling with actress and journalist Oliva Munn in September 2010 after she interviewed him about the film The Social Network. While previous rumors plagued the couple’s relationship, this one seemed to stick. It also didn’t help that they later split, which made many people wonder if Justin had been unfaithful to Jessica. 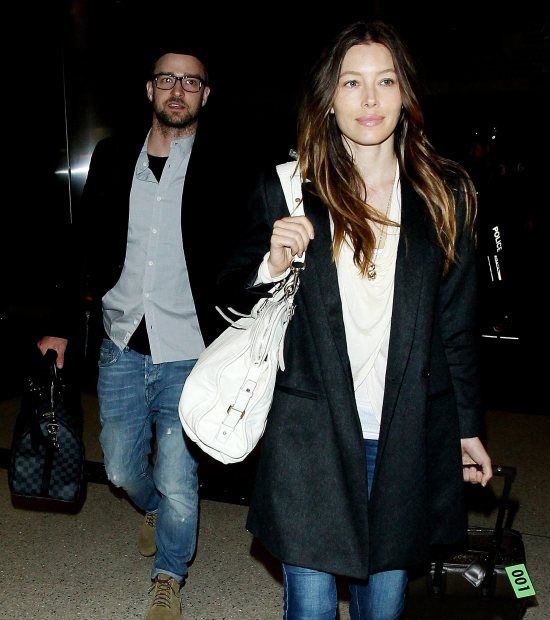 In March 2011, the couple announced that they were calling it quits. A representative for the couple stated, “Addressing the media speculation regarding Jessica Biel and Justin Timberlake’s relationship, we are confirming that they mutually have decided to part ways. The two remain friends and continue to hold the highest level of love and respect for each other.” Justin was heartbroken over the split and wore his heart on his sleeve in interviews post-breakup. He told Vanity Fair that Jessica “is the single-handedly most significant person in my life. In my 30 years, she is the most special person, O.K.?…I don’t want to say much more, because I have to protect things that are dear to me—for instance, her.” Fortunately for him, the couple reunited 3 months after their break. 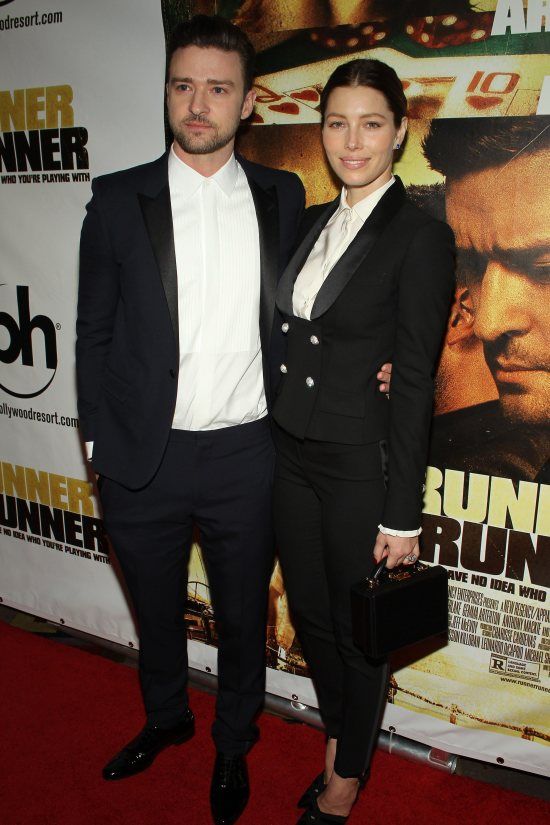 After rekindling their romance, the couple appeared stronger than ever. By the end of 2011, Justin was in the works to propose to Jessica. The two of them celebrated the Christmas holidays in Jackson, Wyoming, when Justin popped the question. The couple told their families to hold off on sharing the news to the media, but there was one member who just couldn’t wait. Justin’s grandmother spilled the news to Gossip Cop by telling them, “He called me on Christmas Day and told me he’s engaged.” She added that her grandson had given her strict orders not to say a word “until after the holidays” but she just couldn’t wait to share the news! Jessica officially sported her engagement ring at the 2012 Costume Institute Gala at the Met. 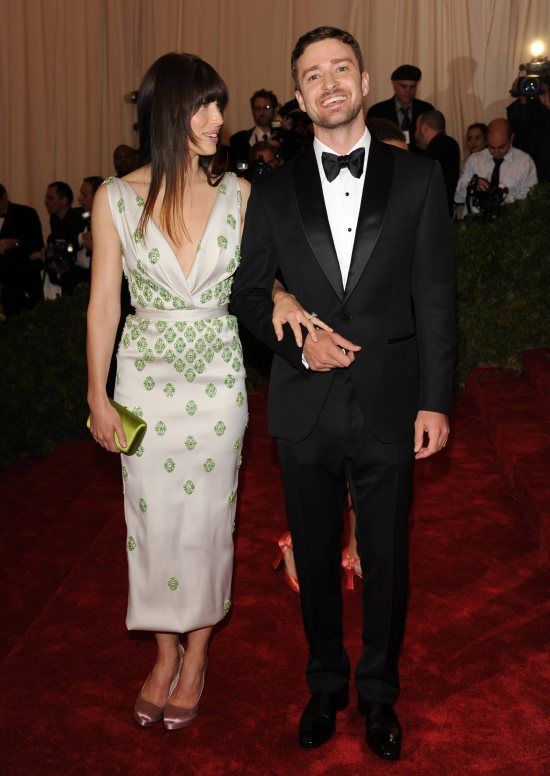 On October 19, 2012, Justin and Jessica wed in a magical ceremony at the beautiful Borgo Egnazia resort in Puglia, Italy. Around 100 guests were in attendance, including close friends Andy Samberg, Jimmy Fallon, and Biel’s 7th Heaven co-star Beverly Mitchell. Jessica donned a gorgeous pink Giambattista Valli Haute Couture gown, and Justin wore a tuxedo by Tom Ford. As a wedding gift to his love, Justin serenaded Jessica on his guitar. “It was an original piece I wrote specifically for the evening and for her,” he revealed. After the wedding, the couple travelled to Tanzania for their honeymoon. 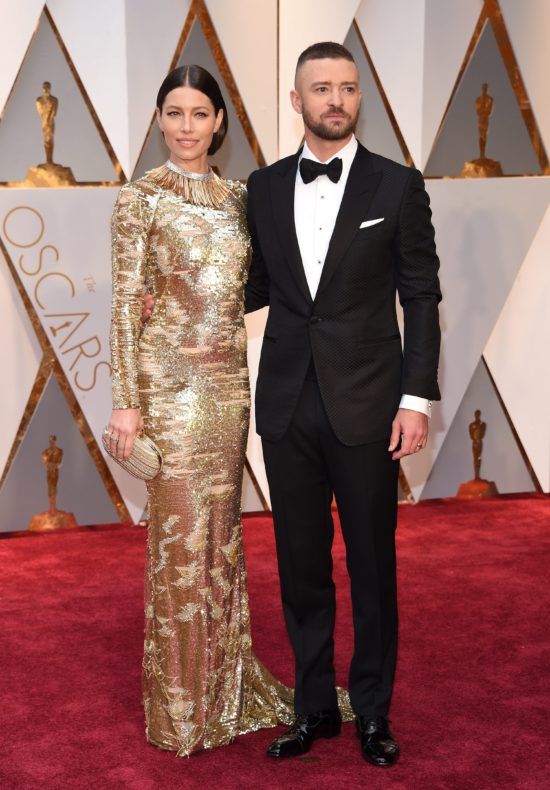 When they’re not at big Hollywood events, the couple live a life that’s pretty down to earth. The two of them are often seen staying in shape together, whether it’s going on a morning run or travelling around on their bicycles. They also like to take their 2 dogs out for their daily walks. Jessica has a pit bull named Tina, and Justin has a boxer. The couple make sure the dogs get some exercise, even on the busy streets of New York.

In April 2015, Jessica and Justin welcomed a new member into their family. The couple gave birth to a healthy baby boy, who they named Silas Randall Timberlake. Justin gushed about being a dad: “It’s the greatest thing in the world, right?” Similarly, Jessica was ecstatic to be a mother to her little one. “He’s wonderful. He’s such a joy,” she said in an interview. “It’s an amazing, amazing experience. Incredibly hard – the hardest job in the world. I’ve never been more thankful and grateful to my own mother.”

When it comes to making his relationship work, Justin jokes that Jessica rules the house. “I answer to a higher power now,” he told the Hollywood Foreign Press. “We have a couple of rules in our relationship. The first rule is that I make her feel like she’s getting everything. The second rule is that I actually do let her have her way in everything. And, so far, it’s working.” But joking aside, the two of them work hard to make their marriage work. “Some days are better than other days for all of us — and if we have our good days and bad days individually, and then we’re dealing with someone else’s good and bad days on top of that, it’s going to add up,” Justin said. The singer looks to his parents as an example of how to keep his marriage with Jessica together. “My mother is a ball of fire in the world and I love that about her. But what I have learned from my stepdad is something as important, which is patience and compassion. Because when you are living with someone else, those two qualities go a long way.” 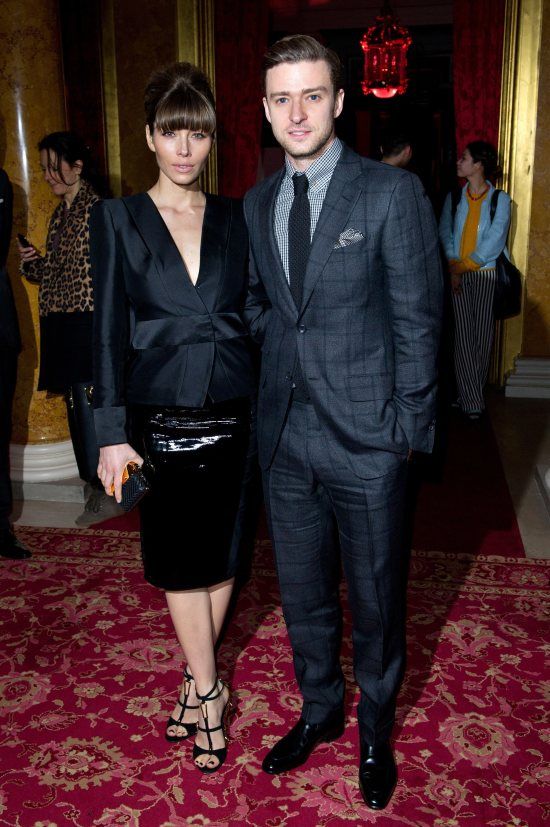 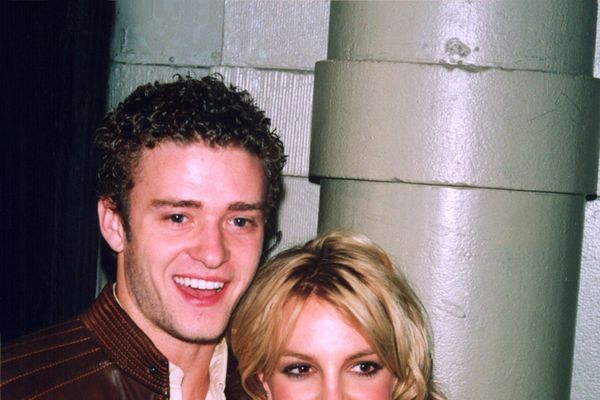