Lisa Rinna and Harry Hamlin have been credited as one of Hollywood’s power couples ever since they got together back in 1992. Rinna is best recognized for her longtime role on Days Of Our Lives and as the host of Soap Talk while Hamlin is both a film and television actor best recognized for his role in the legal drama series, L.A. Law. They’ve been married for two decades and have been together for 26 years which is pretty incredible for two people who live in Beverly Hills and work in Hollywood! Fans have been given an insider look into these two and their marriage on more than one occasion, first when they did their own reality show back in 2010 and now as Rinna co-stars on Bravo’s Real Housewives of Beverly Hills, but we managed to dig up a few fun facts about them! Here are 10 things you didn’t know about Lisa Rinna and Harry Hamlin’s relationship!

In an interview with Andy Cohen in February 2016, Hamlin revealed where he and Rinna first met — and surprisingly, it wasn’t on set. The way they met was actually largely based on chance, and if she hadn’t been there at that exact moment, they probably would have never met or gotten married! “Lisa was working in an eyeglass store in 1992, and she was closing up one night and I was having dinner with the owner of the store. She came in to give him the keys and that’s how we first actually met and talked,” he said.

9. Lisa Thanks Michael Bolton For Her Marriage

According to Lisa, Harry Hamlin was still married to his second wife, Nicollette Sheridan, when she met him. “Harry was married to Nicollette Sheridan turns out she had just left him for Michael Bolton,” she said. Lisa went on to say she thanks Bolton each time she runs into him, or at least the last two times she’s seen him. She ran into him during an episode of RHOBH and said to him: “I just have to thank you from the bottom of my heart. I would not have my beautiful girls. I would not have my husband. Michael Bolton looked at me and said, ‘You are so welcome,'” she said.

They got married in 1997 in the backyard of their Beverly Hills home. They now have two daughters, Delilah, who was born in 1998, and Amelia, born in 2001. “It’s very rare in the world today to stay married, let alone in this town. So we’re blessed. And he’s hot! We have two daughters, Delilah Belle and Amelia Gray. It’s going okay. Knock on wood,” said Rinna. Hamlin has a son, Dimitri, from a previous relationship with Ursula Andress. He was also previously married to Laura Johnson from 1985 to 1990 and Nicollette Sheridan from 1991 to 1992 before he married Rinna.

In an interview with Ben Lyons, Harry Hamlin joked around about Rinna’s gig on the Real Housewives of Beverly Hills. “I call them desperate housewives around the house. I say, ‘Are you doing Desperate Housewives tomorrow?'” he joked. He also said that he jokingly threatened to divorce her when the subject first came up. “She came to me and she said they had asked her to do it, and I said, ‘If you do it I’m going to call my divorce lawyer. I happen to have a divorce lawyer in my phone. And as long as I don’t have to be on it, you can do do it,'” he said. It seems as though he’s gone against his word because he’s made several brief appearances on the show since she joined back in 2014.

A marriage that lasts over two decades in Hollywood is extremely rare, but it does happen! One of the reasons these two are able to make their relationship work is because they are extremely supportive of one another. When asked by The Daily Dish how supportive the two of them are of one another, Rinna responded with: “100 percent, absolutely. We do everything and talk about everything. We’ve been together now for 23, going on 24 years — that’s a long time. And his respect and his opinion means everything to me, and I think vice-versa. And we work together as a team.”

Every summer Harry Hamlin and Lisa Rinna take their two daughters to Canada for a summer vacation in the quiet, picturesque area known as Muskoka, Ontario. It seems that the couple owns a family cottage there and are often seen vacationing with other celebs who flee North for cottage country like Rita Wilson, Tom Hanks, and Cindy Crawford.

4. Secret to Their Marriage

With a marriage like theirs, a lot of people are curious as to what the secret is to maintaining a marriage for that long while living in Beverly Hills, working in Hollywood, and traveling as much as they do. According to Lisa, there’s no special recipe it’s just a matter of luck and a lot of work! “I don’t think there’s a secret. It just works. It takes work. It takes communication. It takes some luck, a lot of mutual respect. I think we got really, really lucky,” she said in an interview with The Daily Dish.

3. He’s Supportive of Her (Even When she Makes it Hard)

“He’s just really supportive. I’m not always the easiest person to support, I do some crazy things — I put my foot in my mouth, I get myself into some trouble, and that husband of mine just will support me and hold my hand and pick me up,” she said. In a separate interview, Hamlin commented on Lisa Rinna’s sometimes controversial actions on last season of RHOBH and responded with, “OK, she can be impulsive from time to time, and I have to watch out for her. But also, you know, that’s why I married this girl. I mean, look at this. I got the whole package,” he said.

Lisa Rinna and Harry Hamlin were both involved in the world of acting when they first met. Hamlin has definitely taken his career to different heights than her, but they’ve actually worked together more than once! They starred opposite each other in the teen crime-drama series, Veronica Mars, and in the Lifetime movie, Sex, Lies and Obsession. Their first ever appearance together was when she guest starred in an episode of Movie Stars, and the two starred alongside each other as Roxie Hart and Billy Flynn in the Broadway production of Chicago. The couple landed their own reality show in 2010 called Harry Loves Lisa and did a commercial for Depends undergarments together — now that’s love!

When Harry and Lisa starred on their own reality show back in 2010, one of the main storylines was about Lisa undergoing a corrective surgery to fix her famously puffy pout. When she was 25, she had silicone injected into the top lip. Later in life it became swollen and bumpy as scar tissue formed, but according to Harry, he didn’t care or notice. “What got me about Lisa was her eyes, not her lips. So I spent most of my time looking at those. Whatever change took place was so gradual, it never registered for me,” he said. “But I love Lisa no matter what — whether she has plastic surgery or not, or she’s gray or saggy. It’s the long haul here.” 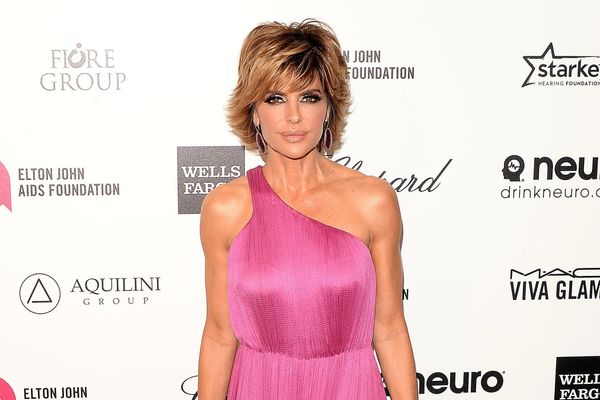