From the moment they saw each other, Blake Shelton and Miranda Lambert had a romantic spark between them. A country superstar duo, they were madly in love with each other. But after 10 years together, the couple called it quits in 2015. The split left many people wondering what went wrong between the two. While we may never know the entire story behind what happened, we’ve pulled out 10 things you may have not known about their relationship – from the beginning to the end.

The first time Miranda and Blake performed on stage with each other there was an instant connection. The audience at the CMT concert couldn’t help but notice it, too. For Miranda, she wasn’t sure how to handle the spark between them. “I didn’t know what to do with it,” she said. “It was like my first duet with some other country star. And I didn’t know if it was just initial butterflies because of that or, I don’t know what it was. It was just this draw to each other.” Shelton had similar feelings. “They paired me with Miranda, and we were on stage for rehearsal, and I don’t know, something just happened, and we both knew it,” he said.

In Miranda’s Behind The Music special, Shelton admitted that he felt conflicted about their connection. “I’ve never had that kind of experience with anybody…I was a married guy, you know? Standing up there and singing with somebody and going, ‘Man, this shouldn’t be happening.’ Looking back on that, I was falling in love with her, right there on stage.” He added, “It was just like this draw to each other. It was just sort of this inevitable chemistry.”

Miranda was also conflicted about her feelings for the male country star, especially since she had seen how infidelity could ruin a marriage. “I knew he was married,” she said. “I had seen their wedding picture in Country Weekly. I knew better, like this is off-limits…Because my parents are private investigators, for God’s sakes. I’ve seen this my whole life, affairs. And I’m like, ‘If all people didn’t know better, I know better than this.'”

While the sparks flew, Blake was still married to Kaynette Williams, his high school sweetheart. He divorced his wife only a year after meeting Lambert. Still, Miranda and Blake insisted that they never committed adultery and waited until the marriage was over before they got together.

Miranda was also in a relationship prior to meeting Blake. She dated country singer Jeff Allen from 2003-2005, but sources report that she dumped him shortly after singing with Blake for the 100 Greatest Duets concert. Allen has a criminal record that includes arson and theft.

Blake and Miranda got hitched on May 4, 2011, in what was a glamorous yet trashy rustic wedding. The wedding had an Airstream trailer that served as a VIP dressing room for the wedding party. The celebration also had eclectic vintage decorations that incorporated a hunting theme. Their good friend country singer Neal McCoy performed for the 600 guests at the reception.

4. Shelton Was A Flirt

It’s no surprise that Shelton likes to flirt with the ladies, and did so while he was married to Miranda. On the couple’s first wedding anniversary, Shelton was on The Tonight Show with Jay Leno where he flirted with actress Scarlett Johansson. When the host brought up Shelton’s wedding anniversary, the country star replied, “Don’t talk about that in front of Scarlett!” There were also rumors that there was something going on between him and singer/songwriter Cady Groves, as the 2 flirted on Twitter throughout Shelton and Lambert’s marriage. After Shelton announced his divorce from Lambert, Groves tweeted, “I never quit loving you – you just ran.” He also frequently hit on fellow Voice coaches Christina Aguilera and Shakira.

Blake’s wandering eye was likely an issue for Miranda because she liked to keep a close watch on who he talked with on his mobile phone. In an interview Miranda said, “Either one of us can always look at each other’s phone, and we know each other’s passcode. I like to check his direct [Twitter] messages.”

Miranda wanted to try to make things work but Blake didn’t think there was anything left of their relationship. “She wanted to try and make it work, maybe have more of a separation,” a source told People. “But he said, ‘I’m filing.'” A friend close to Blake insisted that he had no choice but to end the marriage. “It was very clear that things weren’t going to work out. So he decided to end it. He still loves her very much.”

Blake seemed to move on quickly from his divorce from Miranda. Soon after finalizing the divorce on July 20, 2015, Blake was seen together with Voice co-star Gwen Stefani. The two officially announced their relationship in November 2015. In contrast, Miranda said she needed a little more time to heal. In her 2015 cover story in Cosmopolitan, Miranda told the magazine she was taking time some time for herself. “Some of that might mean nights on my porch crying, drinking whiskey, and going, ‘Man, this sucks right now.'” She began dating singer Anderson East in December 2015 after meeting at the “Live on the Green Music Festival” earlier that year. 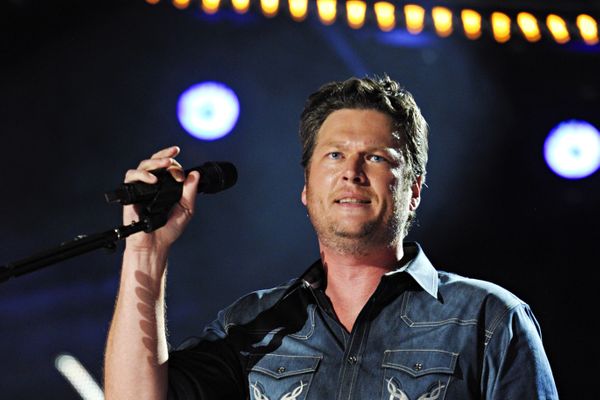