10 Things You Didn’t Know About Real Housewives Of Potomac

The Real Housewives of Potomac took the Bravo world by storm when it aired earlier this year in January. As the eighth installment in the Real Housewives franchise, the show was a huge success and it quickly became one of the most watched Real Housewives series. RHOP followed the personal and professional lives of six women living in the elite community of Potomac, Maryland. These women revive the longtime battle between old money and new money as they each bring something different to the table in terms of culture, racial diversity, religion, financial status, and of course the theme of the show, rules of etiquette. It was recently announced that Bravo would be renewing RHOP for another season, so we’ve decided to take a look at 10 things you might not have known about The Real Housewives of Potomac!

During the early stages of the show, before it went to air and was simply filming around town, the producers identified the show as “Potomac Ensemble.” The Washington Post reported that a patron spotted the women filming at the posh Willard hotel. The viewer said there were signs posted up around in the lobby of the hotel to warn individuals that they might be caught on camera and the sign identified the show under the moniker name. It seems production will often do this because if they posted the title with “Real Housewives” it might draw in too much unwanted attention and they want the show to flow in reality as smoothly as possible. In fact, not only was the production team using that title to avoid attention from fans, but they also told the starring women on the show that it was going to be called “Potomac Ensemble.” In an interview with Robyn Dixon, she said: “We didn’t know our show was going to be a Real Housewives show. In filming the show, the working title for it was the Potomac Ensemble, six women in our daily lives interacting with other women. It felt somewhat like a Housewives show — it kind of followed the same formula, but they did not tell us what it was.” Dixon revealed the women found out on a conference call where the production team congratulated them, told them Bravo loved them and wanted them to become The Real Housewives of Potomac. This was in November, and the show premiered in January — talk about short notice!

Fans of the Real Housewives will know that the cast members are required to write a blog response to each episode that goes to air. The blogs are posted on the Bravo website right after the episode airs. Potomac housewife Robyn Dixon revealed in an interview with Black Enterprise that the Bravo production team sends each woman a tape of the episode two days before it will be revealed on national television. They are required to watch the tape and write a detailed blog response with their feelings. “Watching myself on TV is very strange…I find myself saying, I should have said this, or I should have done that. Then you see what people are saying behind your back, and you are like oh, if I’d known she said this, then I would’ve checked her differently! But that is what the reunion is for, when you get to the reunion you are able to have a more open dialog and really address things,” she said.

Katie Rost played a big part in the first season of The Real Housewives of Potomac. She definitely brought the drama and she constantly feuded with Gizelle Bryant and Robyn Dixon, and stirred up conversations about racial diversity. Even though we see this happen all the time in the Real Housewives franchise, it’s still surprising to some that she will not be returning for the second season. On June 29 she took to Twitter to announce that she isn’t coming back and subtly implied she was fired because she was “too boring.” Her exact words were: “Sad to announce I will not be on #RHOP this season. Can’t make my life exciting enough. #DeliveredTomorrow” — ouch! Bravo hasn’t released a formal statement about her departure and it’s too early to tell who will be replacing her. There are rumors speculating she couldn’t continue because her on-again-off-again finance Andrew Martin refused to be filmed and that her ex-husband was against their children being filmed. While the real reasons are unclear, the one constant truth remains that Rost will no longer be a Housewife.

4. Two of the Housewives are Bisexual

This little tidbit of information was revealed during the two-part reunion special for The Real Housewives of Potomac. Not only is Katie Rost bi-racial, but she’s also bisexual! Katie first admitted to it during an episode when she said she had dipped into the “lady pond” as the Potomac ladies would refer to it. The topic came up again on the reunion and Rost even dished on which of her cast mates she’d hook up with. She said, “Definitely Charrisse, definitely Ashley, I would have like hate-sex with Gizelle. I would just include everyone, sure.” She then admitted she believes every person is bi-sexual, but they just don’t act on it. The confession of her sexuality sparked another Housewife, Ashley Darby, to dish that she was in a romantic relationship with a woman when she was only 18-years-old.

Unlike it’s predecessor, The Real Housewives of D.C., Potomac enjoyed an extremely successful first season. When the show was first announced, many people drew comparisons to former housewives of Washington on the basis that Potomac is nearby, but this particular show is far from it with a completely different cast and whole new vibe. The first season of RHOP did so well that it has already been renewed for a second season. It went down in history as the most-watched first season of any Real Housewives show since The Real Housewives of Beverly Hills. Not only that, but it holds the title of being the highest rated premiere of any series in the Real Housewives franchise with an average of 2.1 million viewers. Sounds like all that preaching about good etiquette paid off!

One of the major storylines from season 1 of The Real Housewives of Potomac was between Katie Rost and her on-again-off-again boyfriend, Andrew Martin. Finally in the season finale, he proposed, but then right before the reunion they broke up. It’s unclear whether the two are back together or not, but since the season wrapped up, some shocking information from his past has surfaced in the media. Radar Online reported that Andrew has been involved in a “major drug bust which involved boxes full of marijuana and a SWAT invasion on his home.” This incident occurred back in 2011 after a drug dog from the Montgomery County Police Drug Interdiction Unit “removed two parcels” from a Maryland FedEx. The parcels contained bags of marijuana in amounts that were “consistent with that of possession with intent to distribute.” The drugs were linked back to Andrew because the parcels were addressed to a home owned by him. When his home was raided by a SWAT team they found more drugs and paraphernalia. Radar Online also reported that Andrew was not arrested at the time because he was not on the property, but he was charged and found guilty of conspiracy to possess with intent to distribute and given three years probation. We’re pretty that kind of behavior isn’t covered in Karen’s etiquette handbook!

Throughout the entire first season, viewers saw Charrisse struggle with the current state of her marriage. Her entire storyline was focused around whether or not she was going to follow through with getting a divorce, and she was surprisingly open about it. On numerous occasions, she stated she was going to file for divorce because she wasn’t happy in the relationship. Her husband, Eddie Jordan, lives separately from Charrisse because he had a coaching job at Rutgers University. However, during the reunion, Charrisse revealed that her husband had been let go from his coaching job, but still hadn’t moved back in with her, which many thought was the reason they were living apart in the first place. While watching the show, it was clear the two had major communication problems as Charrisse admitted he rarely responded to her texts, even when she told him she was going to start the process of a divorce. Just as everything was wrapping up in the reunion, Charrisse also shared with the women and viewers that, since she appeared on the show, her husband has flat out stopped talking to her altogether. No word on the state of her marriage or whether these two have been able to repair their relationship, but from the way the show left off after the first season, things weren’t looking good. 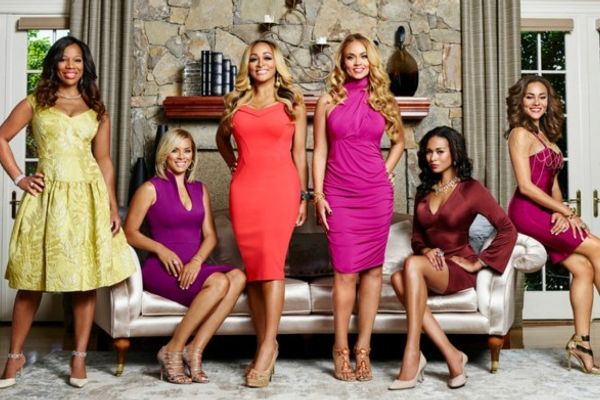 Cast Of Real Housewives Of Potomac: How Much Are They Worth?