David and Victoria Beckham have the sort of marriage that most of us dream about. They’ve been together for almost two decades and they seem even more into each other than they did when they first got together. In celebration of their wedding anniversary, here are 10 things you didn’t know about Posh and Becks’ relationship:

Even before David met Victoria, he knew she was one. He first noticed her when he and a teammate from Manchester United were watching TV in late 1996 and a Spice Girls video came on. Victoria was wearing a catsuit and David was immediately smitten. “I turned around to Gary and said, ‘That one there, that’s the girl I’m going to marry,’” he told W magazine. They met in February 1997 when she attended one of his games, but he was too shy to make a move. A couple of weeks later, she and another Spice Girl went to see another one of his games and he finally got her number and called her the next day and the rest is history.

In 2004, Rebecca Loos, David’s former personal assistant, claimed to have had an affair with him when he moved to Spain to join Real Madrid. David always denied it and Victoria stuck by her man. “David and I got through it together,” she told W Magazine. “No one said marriage was going to be easy. Yes, there have been bumps along the road. But the fact is we’ve come out of everything we’ve been through stronger and happier. It’s even better now than when we were first married. After all these years, we can just come home and have a laugh together.”

They grew up within 15 minutes of each other in London. Both come from very working class families and both had big dreams. David always dreamed of being a soccer player and for Victoria everything revolved around her singing and dancing lessons.

David was the one who convinced Posh to ditch her hair extensions for an inverted bob back in 2006. “She knew how strongly I felt about her going back to a bob. When we first met she had a bob so it’s the best for me,” he told GMTV. “It’s nice to be able to put my hands through her hair and not feel the hair extensions.”

Britain’s most famous power couple secretly renewed their vows in February 2008 at their Beckingham Palace Estate. David reportedly planned it and surprised Victoria by getting down on one knee and popping the question for the second time. The ceremony only included a handful of friends and family. “It was a huge undertaking to keep it all under wraps. He was desperately excited but had had to keep quiet with everyone but his and Victoria’s closest family,” a source said.

They were married in a super lavish ceremony at Luttrellstown Castle in Ireland back in 1999. The wedding cost a reported $800,000 and included fireworks and an 18-piece orchestra playing Spice Girls’ hits.

4. Child out of Wedlock

Four months prior to their wedding, David and Victoria welcome their first child together, Brooklyn. In 2002, they welcomed their second son Romeo and in 2005 they welcomed their third son, Cruz, into the world. Finally, in 2011, they had a daughter, Harper.

For their 10th wedding anniversary, they exchanged Japanese necklaces, which featured the Archangel Raphael, who is considered the most powerful and loving angel in Heaven. “The energy they emit is incredibly powerful. These pieces act as talismans of love, healing and protection,” Victoria said.

According to the former Spice Girl, David always looks good in the morning. “He just naturally looks good all the time. He never looks like s*** in the morning. Never. So he’s sitting there sending his e-mails, all ripped. Not an ounce of fat on him. And I thought, you done good, girl. I sure wasn’t thinking of his high-pitched voice,” she told Marie Claire.

In January 1998, David proposed at the 19th century Rookery Hall Hotel in northwest England with a $65,000 three-carat diamond solitaire. Victoria, in turn, gave him an $80,000 three-tiered band of 96 diamonds as an engagement ring. 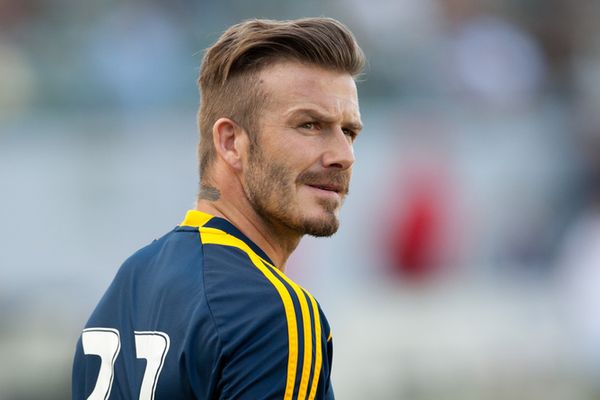