It may have taken J.K. Rowling some time before publishers saw the value in her books, but it wasn’t long after that when film producers realized how much bigger this franchise could become. Producers, the cast, and the crew had a lot of hard work set out for them in bringing the magical world of Harry Potter to the big-screen because of a large, loyal and extremely passionate fanbase with very high expectations thanks to the books. As to be expected, it was no easy to feat to do all this, and while it all came together wonderfully on-screen, there is so much that fans never knew, and never got to see. With $7.7 billion in worldwide receipts over all eight films, the Harry Potter franchise has become the second highest-grossing film series of all time. With no expense spared on the set, check out 11 behind-the-scenes secrets from the Harry Potter films!

Before anything can even happen on-set or with casting, film producers have to find the perfect fit in a director whose vision will bring the film to life. This was of course extremely important for Harry Potter, and producers went straight after famed director Steven Spielberg for the job. Unfortunately Spielberg at first wanted the film adaptation to be animated and suggested American actor Haley Joel Osment provide the voice for Harry Potter. In the end, it was mutually decided Spielberg wasn’t the right fit, and Spielberg contended the whole thing was just about making money. “[It’s] like shooting ducks in a barrel. It’s just a slam dunk. It’s just like withdrawing a billion dollars and putting it into your personal bank accounts. There’s no challenge.” Meanwhile, rumors flew that it was author J.K. Rowling who had clashed with Spielberg, but on her website she wrote, “Anyone who thinks I could (or would) have ‘veto-ed’ him [Spielberg] needs their Quick-Quotes Quill serviced.” 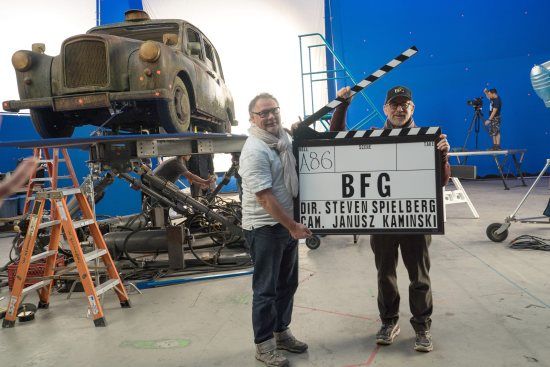 With eight films over the span of 10 years, the film franchise saw many different directors come and go, each with unique ideas and visions that had to be incorporated and sculpted to keep Harry Potter on the right track all the way through. After Chris Columbus directed the first two films, he exited claiming he was “burned out,” and became a producer while Alfonso Cuaron stepped in to direct the third film. He then stepped down, leaving the door open for Mike Newell who did the fourth film, but also declined the next. Luckily, David Yates stepped in for the last four films, and the directors always worked with each other to ensure the stories flowed properly. “Chris spent time with Alfonso, Alfonso spent time with Mike and Mike spent time with David, showing him an early cut of the film, talking through what it means to be a director and how they went about [making the films].” Despite this, Alfonso Cuaron came under serious heat when he decided to detract from the time the students spent in their school robes, and wore everyday clothes to “show their personalities.” While it ended up working out, at first word of the change, fans went up in arms in mass quantity. 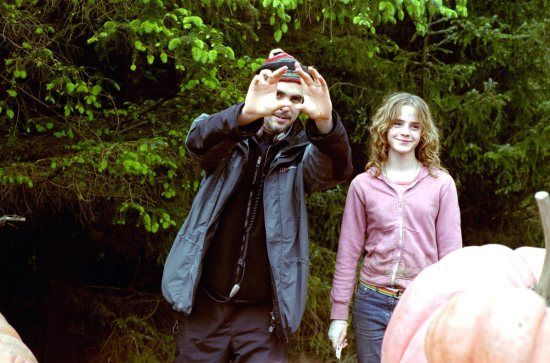 Casting perfectly for the film was tough and demanding all on its own. Daniel Radcliffe was discovered by producer David Heyman and writer Steve Kloves when he was seated behind them in a movie theatre. Heyman stated, “There sitting behind me was this boy with these big blue eyes. It was Dan Radcliffe. I remember my first impressions: He was curious and funny and so energetic. There was real generosity too, and sweetness. But at the same time he was really voracious and with hunger for knowledge of whatever kind.” Heyman then convinced Radcliffe’s parents to let him audition for the part. For the casting of the main roles, including Harry, Ron, and Hermione, each actor and actress had to read a page from the novel, then improvise a scene of the students’ arrival at Hogwarts, and finally to read several pages from the script in front of the director. After thousands of auditions, casting director Susie Figgis left the production, complaining that Columbus was too picky after he stated that none of the thousand of children were “worthy.”

A major point of contention between American fans and the rest of the world is the discrepancy in the title. The original title of the first book (and film) is Harry Potter and the Philospoher’s Stone, but after Scholastic bought the rights to the book for its American audience, it asked Rowling for an alternate title because not many Americans were familiar with the word, and scholastic just didn’t like the way it sounded in general, so Rowling suggest Harry Potter and the Sorcerer’s Stone. Due to this, all the stars that have lines saying “philosopher’s stone” had to do identical re-shoots saying “sorcerer’s stone” instead for American versions of the film. 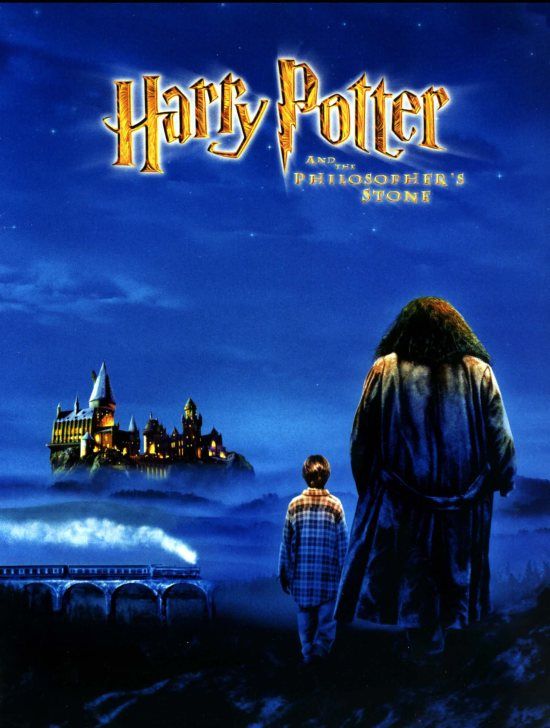 With the three main stars being around the ages of 10 and 11 years of age, a major part of production was working around their real life schoolwork. The children could only film for four hours and had to have a minimum of three hours of real schoolwork per day. As well, to ensure the film was shot authentically in the United Kingdom, British film industry officials agreed to changing UK’s children labor laws to make filming easier with so many child stars, meaning they added a few more working hours per week and made the timing of on-set classes much more flexible. They also may have mixed the two, as for classroom scenes they often gave the kids their real schoolwork to make it more authentic. Consessions also had to be made to make filming more comfortable for the children, including the fact that Rowling agreed that Harry could have blue eyes in the film despite the emphasis on his green eyes in the books because Radcliffe had extreme irritation when wearing the green contacts. On the same note, Hermione did not have buck teeth in the film like her character in the book did because Emma Watson had a very hard time delivering her lines with the fake buck teeth in. 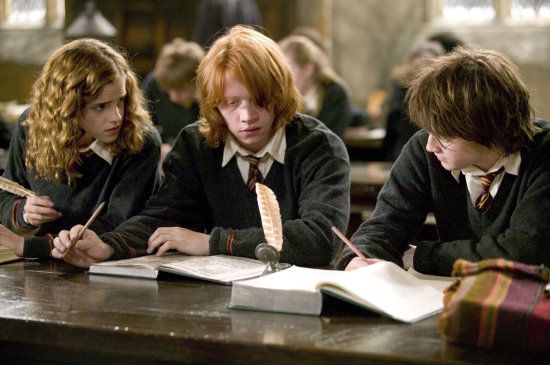 Although the films were overseen by Rowling to ensure they stayed as true to the Harry Potter story and the books as possible, they of course couldn’t include everything and, once the actors really knew their characters, some ad-libbed scenes were kept as well. In Harry Potter and the Chamber of Secrets the scene in which Lucius Malfoy confronts Dumbledore and Harry in Dumbledore’s office was supposed to end sooner. Jason Isaacs, however ,who portrayed Malfoy, suggested that someone like Malfoy would say something after being humiliated, so Columbus told him to go for it. Isaacs improvised the line, “Let us hope Mr. Potter will always be around to save the day,” and playing off it, Radcliffe responded with his own improvised line, “Don’t worry. I will be,” stunning everyone and the whole interaction stayed in the film. It also turns out that Draco Malfoy’s funniest line from the film was also improvised. When Malfoy states, “I didn’t know you could read,” to Harry disguised as Goyle thanks to polyjuice potion, it turns out that Tom Felton had only made up the line because he had forgotten his real one.

After numerous viewings of Harry Potter and the Goblet of Fire, fans began to notice one thing in particular: while everyone was seen actually dancing at the Yule Ball, Harry was most only seen zoomed in on and therefore from the waist up. As it turns out, while everyone else had almost three weeks of dance practice and training in preparation for the scenes, Daniel Radcliffe’s much heavier filming schedule (because he was in almost every scene of the film) meant he had only four days of training in comparison. Due to this, they just decided to show him dancing from the waist up as much as possible so as not to show his stumbling feet, although Harry is supposed to be an awkward dancer anyway, so it wasn’t a major issue. 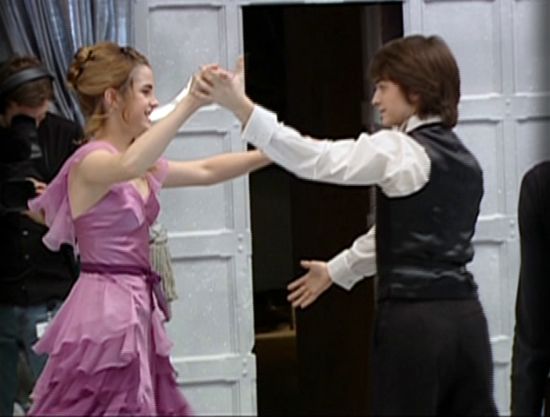 In the books, and subsequently the films, a huge deal is made out of Harry using his invisibility cloak to sneak into Hogwarts library’s restricted section to try to find information on Nicolas Flamel, and as it turns out The Duke Humfrey’s Library, where the scenes were filmed, had some strict rules of its own that it broke for the movie. The historic library has forbidden any type of flame from being in the library for any reason, but for the scene in which Harry holds the lantern up, they made an exception. This was the first exception to their no-flame rule in hundreds of years! 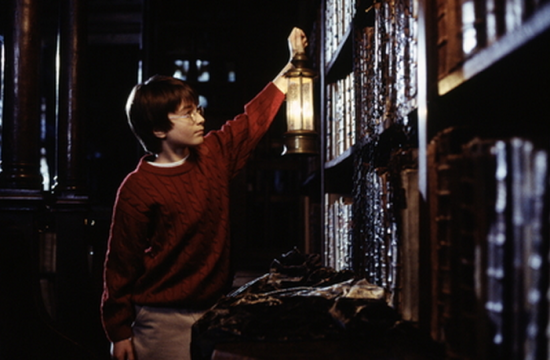 Even though it was expensive and elaborate, the crew made sure no corners were cut in any scene to make everything look as real as possib;e, and that includes the Great Hall feast scenes. For the first film director Chris Columbus wanted to portray the elaborate feasts exactly like they were described in the books, and opted for the food to be completely real. This may have played off well on-screen, but during filming, the food spoiled extremely fast under the hot production lights and created a very bad odor on set. To counteract the problem and to reduce the waste for all furture Harry Potter movies they instead froze food and created molds so that it was fake, but still looked realistic! 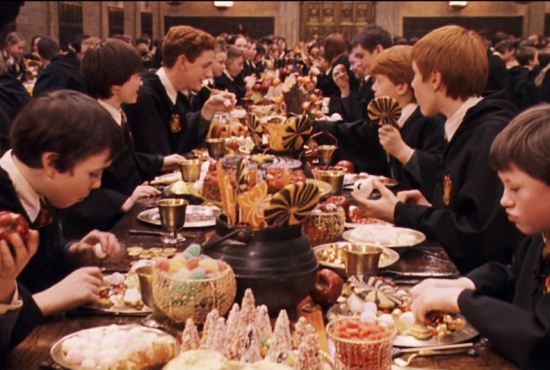 In the books, the transformation of Dudley Dursley from an overweight youngster, to a leaner, muscle-bound teen is well documented, but the actor for the films, Harry Melling, took it too far. In his one year hiatus from filming Harry Potter and the Chamber of Secrets to Harry Potter and the Prisoner of Azkaban he lost so much weight that makeup crews had to make special face prosthetics for him to wear during his scenes, and put him in a fat suit. It took the make-up crews six months to create the prosthetics so that they would still look realistic up close, but producers ended up still having to cut almost all of the scenes Melling filmed. 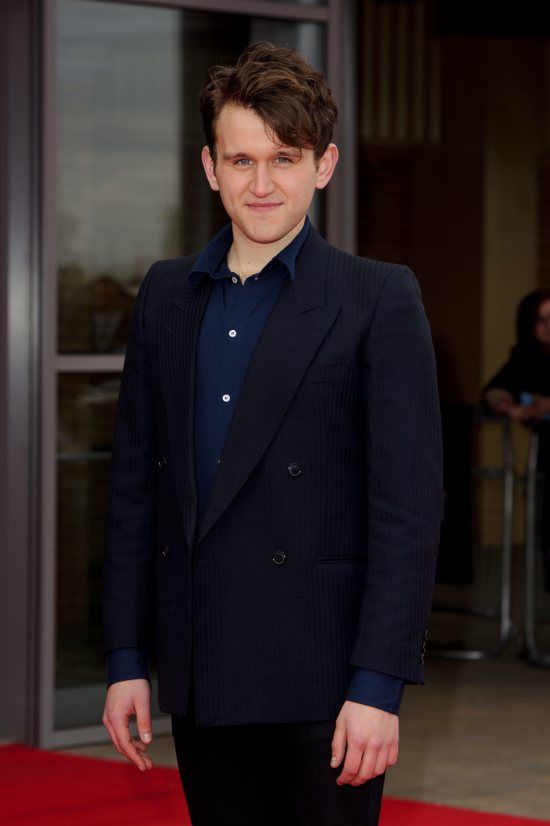 After ten years and eight movies, the cast went through a lot of set pieces! This included 14 Ford Anglias that were wrecked in the second film for the scene with the Whomping Willow. Daniel Radcliffe also went through 160 pairs of prop glasses through the entire series as well as 60 to 70 wands. Speaking of wands, there were 17,000 hand-decorated and hand-labeled wand boxes for the scenes in Ollivanders. Not to mention there were 250 body casts made of actors for all of the death, petrification and stunning spell scenes, as well, each memory vial in Dumbledore’s Memory Cabinet got its very own handwritten vial. Talk about a lot of time, effort and resources! 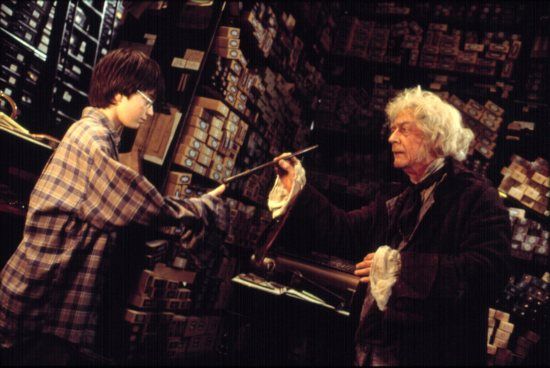 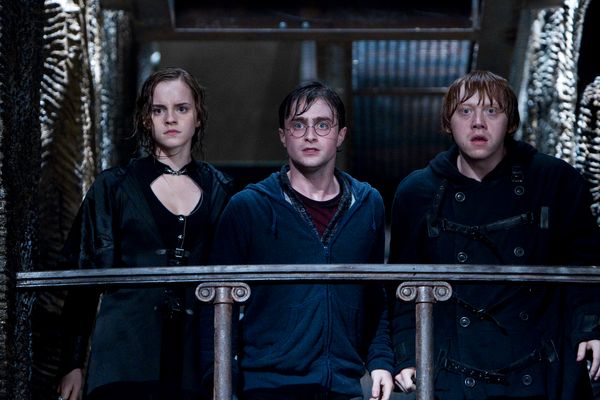