The last week of November was a good one! On November 25th we got the Gilmore Girls revival series and a few days later Lauren Graham’s book Talking as Fast as I Can came out so, we think it’s safe to say that this Gilmore Girls’ fans are super thrilled! We’ve read through the book and there’s plenty about the show that made her famous and other little tidbits that most people didn’t know about her so, without further adieu, here are the 12 most shocking revelations from Graham’s book:

After finishing school, she landed a spot in the Equity apprentice program at the Barn Theatre in Augusta, Michigan. She was up for an Equity part and part of her audition required her to expose her backside to the director. Although she went through with the audition, afterwards she broke down in tears. Since then, she’s had a strict “no nudity” policy.

11. She Never Reads Reviews About Herself

During her second year at the barn, the Parenthood star was given an equity role. She played Marjorie Baverstock in The Musical Comedy Murders of 1940 and received her first professional review from the Kalamazoo Gazette. It wasn’t a good review though. The reviewer commented that he’d wished her character had died sooner. Since then, she’s never read a professional review about her work and she’s also never Googled herself.

10. Getting the Role on Gilmore Girls

Graham had been sent the Gilmore Girls script twice, but the first time she received it she didn’t read it because she was still tied to the show M.Y.O.B., which hadn’t yet been cancelled, and she was scared about loving the script only to find out that she couldn’t do it. The second time the script was sent to her, she auditioned and she got the part. They went ahead and filmed the pilot with Graham, but her keeping the part was dependent on M.Y.O.B. being cancelled, which it ultimately was. If it hadn’t been cancelled, they would have had to recast the role of Lorelai without Graham.

9. She Doesn’t Watch Herself On-Screen

Unlike some actors/actresses who find it helpful to watch themselves on-screen, the Gilmore Girls star doesn’t feel that. “I’m not sure when I stopped watching things I was in – it’s probably more like I never really started. I learned fairly early on that I was not one of those actors who was helped by seeing myself onscreen. It took at least three viewings of something I was in to even begin to be objective, and on Gilmore Girls, we did twenty-two episodes each season,” she wrote.

Graham and Alexis Bledel were cast without ever having met each other. “I was cast very late in the process, partially because of the M.Y.O.B. thing. So there was no time for a chemistry read – usually a minimum requirement when casting two actors whose relationship is vital to the success of the show,” she wrote. “There’d been no time for anyone to even see us standing side by side, just to make sure we looked related.” In spite of this, Graham knew right away that she liked Bledel, but she knew that “it was all a stroke of luck.”

Gilmore Girls’ initial time slot, Thursdays at eight on the WB, had Graham worried about whether the show would survive past its first season. They were up against the hit show Friends and the WB was still a relatively new network at the time. “Thursday night on NBC was, in the year 2000, the biggest ratings night on all of television. We’d be up against Friends, the number one show at the time,” she wrote. “The WB itself was still very new, and the ratings, even of their most successful shows, tended to be much lower than those of the big four networks. So on Thursday nights against America’s favorite sitcom, we almost had zero chance of finding an audience.”

From the start of Gilmore Girls, Kelly Bishop had designated herself Graham’s TVM (TV Mom). She was never a fan of anyone Graham was dating and once told her that she should date someone who was more on the TV actress’ level like “that wonderful actor on Six Feet Under.” She was referring to Peter Krause, who Graham started dating back in 2010 after they began working together on the set of Parenthood.

5. She Didn’t Like Lorelai and Rory’s Season Six Fight

When Lorelai and Rory fell out at the end of season five and their fight continued through several episodes of season six, Lauren wasn’t happy with the development. “I’d never played a character for this long, and while it’s a bad actor cliché to say ‘my character would never do that,’ the line between personal and professional starts to get so blurry, and after a while you start to feel like what’s happening to your character is sort of also happening to you,” she wrote. “I remember talking about it with Amy, who felt it was important developmentally that this always-close relationship hit a significant growing pain. Still, I felt bad in scenes where I kept holding a grudge”

Season seven was such a blur for Graham that she doesn’t remember her character marrying Christopher: “While we were filming the reboot, Dan Palladino had to call one of the superfan assistants in the office to have her explain the whole episode to me in detail. Even then, I wasn’t sure she was telling me the truth: ‘No. Really? Are you sure? No. Paris?’ I kept saying to her.”

When the television actress was first on Gilmore Girls, she used to run into George Clooney on the Warner Brothers’ lot. “Incidentally, when I was first doing Gilmore Girls, I’d run into George Clooney on the lot sometimes, and he was always very nice to me and acted like he knew who I was and treated me like I was behaving normally, which was very kind in the face of my babbling and drooling,” she wrote.

While filming the scene at Emily and Richard’s where Lorelai and Rory see the eight foot tall painting that Emily commissioned, Kelly Bishop asked Ed Herrmann to make his presence known “by doing something big and loud” and Lauren believes that he responded. “Later, during the scene, a ley light goes out for no reason,” she wrote.

Graham had no idea what the last four words of the show were and had no idea that they were “a thing” until she was filming the revival series. When Amy Sherman-Palladino finally told her what they were, she was really surprised because they were not what she was expecting. “They are not, however, what I was expecting, because they are not what I would call the exact definition of a conclusion. As in they do not end the story we are telling as much as they introduce something that was not previously known.” Graham considered the four words to be more of a cliffhanger, but none of the other castmembers were as bothered by it as she was. 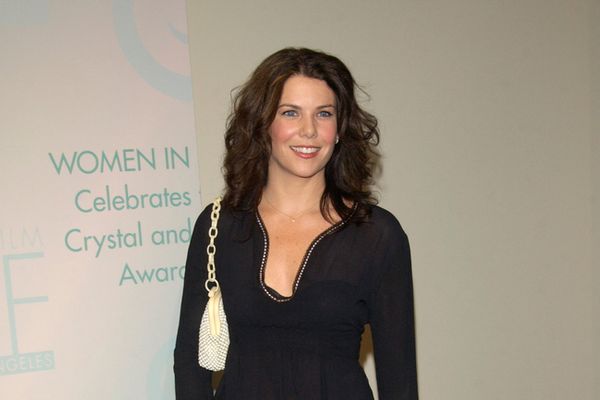