Country singer Brantley Gilbert and his wife Amber Cochran recently announced they are expecting their first child in November 2017 — a baby boy! These two live a pretty quite life together in Georgia, but when he’s not relaxing at home with his wife of two years, Gilbert is on the road promoting his career as one of country music’s biggest stars. They are easily one of country music’s cutest couples and even though they manage to keep their personal lives private and off social media, we managed to dig up 12 things you probably didn’t know about their relationship!

When Brantley Gilbert’s engagement to fellow country star Jana Kramer dissolved in August 2013, he began dating a woman named Amber Cochran. While many people might have thought Amber was a new flame, she’s actually a past love from his small hometown in Georgia. “It was one of those things that was on and off for a few years — mostly on — and then she was the one that got away for about five years. It came back around and I’ve never been happier,” he said during an interview on The Bobby Bones Show back in 2014.

Gilbert has admitted that many of his songs were penned about his wife, a former schoolteacher from his hometown, and if you want to know more about their relationship, just listen to any number of his songs. “Amber is an amazing person and has inspired a lot of my songs from ‘More Than Miles’ to ‘You Don’t Know Her Like I Do’ for the last 10 years. I’m a blessed man to have her back in my life and can’t wait to make her my wife,” he said in an interview with People.

When Gilbert proposed to Amber, he’d known her for about 10 years, but he was still really nervous. “I had a plan, and I had a song. I wrote a song to her dad, actually. It was called, ‘Your Little Girl,'” he said. “Me and her dad always had a cool little thing, like…her mom knew I was trouble, and he did too, but we kind of joked around. We were buddies until the girls walked in, and then he had to be all serious.” Amber’s father passed away before he proposed, but he still found a way to incorporate him into the day. “[I] stopped by and saw him at the grave that day and put the song down, and that was my way of askin’ for his blessing since I couldn’t ask him for it. I just kind of talked to him for a little bit and sang that song to her and asked her to marry me, and, my God, she said yes!”

The cute Southern couple wed in a small ceremony at Gilbert’s home in Georgia on June 28, 2015. Gilbert told Billboard they had to move their wedding date because he accidentally revealed it publicly! In an interview with Country Countdown USA after the fact, Gilbert dished on some details from the special day. “The ceremony was awesome. I’ll let you in on a little secret: I cried like a baby. She’s got a piece of my heart that nobody’s ever touched before,” he said.

8. The Cutest Thing He Does For Her

At the BMI Awards in 2015, Amber told People what the cutest thing is that Gilbert does for her — and it’s pretty cute! According to her, he does a lot of cute things for her, but her favorite is the love notes, “He leaves me notes a lot, which I love. Recently he sent me a text and asked me to go on a date with him, which was super sweet.”

7. How They Got Back Together

The reason Amber and Gilbert broke up back in the day was because of Gilbert’s addiction to alcohol and opiates. “I remember her telling me the last time it ended, ‘I love you and I want to marry, but it terrifies me to talk about marrying somebody that rides around with bottles of liquor in the console of their truck.’ That rang true. It pissed me off and I blew up and that was a big break up,” he said in an interview with Taste of Country. They both decided to go their own ways, but ended up back together in 2013 when Gilbert was clean after five years apart.

6. She Accepts his Past

It’s no secret that Gilbert has a tumultuous past. Not only was he engaged to another country singer, Jana Kramer, less than a year before he got back together with Amber, but also his history of addiction. Despite all this, Amber accepts the fact that their road to love was more than a little bumpy. “She respects the fact that it is a broken road, not to quote Rascal Flatts. All of that stuff that I went through, and all these other relationships, did get me back to her. And I learned a lot. Every time something went wrong and didn’t go right, I learned, and it made me better for her,” he said. “I still got a lot of work to do. I got a lot of learning to do. I think both of us do together, but I think that’s part of growing, and probably what I’m having the most fun with…it’s been really cool,” said Gilbert.

One of the key ingredients to a successful relationship is not only being in love, but also genuinely liking each other. Gilbert and Amber have a relationship that goes pretty deep, all the way back to when they were teenagers, before fame and fortune came along. This is one of the reasons he was unable to get over her during their time apart. “She’s always had a very, very, very big piece of my heart, and I think that had a lot to do with why I never could give a lot of myself away. With her, she’s my best friend, too, so finally having somebody to actually share all of this with and somebody that knows me very well, that I can vent to and that can vent to me…There’s nothing like having somebody that loves every single bit of you, and that you love the same way, to actually really share it with,” he said at a media event.

In May 2017, “The Weekend” singer and his wife announced they are expecting their first child together, a baby boy. Amber gave Gilbert the happy news back in February when he was out on the road. She surprised him by showing up on his bus right before a show in Louisville. “She handed me a box and there were three pregnancy tests in there and all of them were positive. I think I stared at it for at least two minutes without saying anything because I was literally in shock. We’d been told it was just not in the cards, and I’m staring at this answer to many, many, many prayers,” said Gilbert in an interview with People. They plan to raise their family in Jefferson, Georgia, where they both grew up and fell in love.

The cute couple had been wanting a child ever since they got married back in June 2015, but sadly it just wasn’t happening. “We’d been to see a fertility specialist, and two different folks that told me it would be close to a miracle if it happened without IVF. I’m not much of a quitter, but I was really, really frustrated,” he said. According to Gilbert, Amber was hesitant to dive into in vitro fertilization, so they decided to put their wishes to be parents on hold for the time being which is when they unexpectedly got pregnant!

In an interview with Southern Living, Amber and Gilbert answered a few questions about their relationship and home life, one of which was what they’d be doing on a typical Saturday night. Don’t be fooled by Gilbert’s rowdy party anthems he’s typically caught singing, cause he and Amber admitted they are homebodies. During football season, Amber said they’d be watching their favorite football team, Georgia Dawgs. “I don’t know about other nights. We do a lot of movie nights and date nights,” said Gilbert. “We do a lot at home,” added Amber. 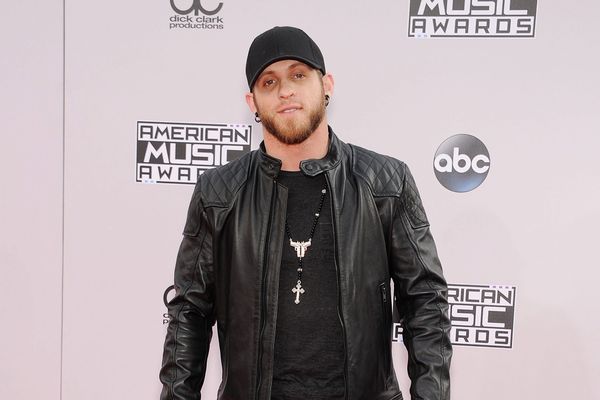 Things You Might Not Know About Country Singer Brantley Gilbert