Rose McGowan has had a very colorful life – totally unlike that of most starlets – and she documented much of it in her memoir Brave, as well as in various interviews. She’s been famous for over two decades now and in recent months she’s found herself in the news a lot. Since people are so curious about the outspoken advocate for women, check out these 12 things most people don’t know about Rose McGowan:

12. She Never Got Along with Alyssa Milano

In her memoir, Brave, the actress turned activist hinted that she didn’t get along with Alyssa Milano on the set of Charmed. “There definitely could have been drama on the set, but I refused to take part in it,” she wrote. Following the release of her book, however, McGowan has been more open about her dislike of her former co-star. “I don’t like her,” she told Nightline co-anchor Juju Chan. “Cause I think she’s a lie.” She then referenced Milano’s husband, David Bugliari who works as an agent in Hollywood. “Do you think I don’t know these people? Do the math. Who’s behind Time’s Up? CAA. Where do they meet? CAA? Who needs good PR? CAA. Who are part of the pimp problem? CAA.”

11. Raped by an Oscar-Winning Director when She Was 15

10. How She Was Discovered

Three weeks after her boyfriend Brett was murdered, McGowan was discovered when she was standing in front of a gym crying. A woman approached her and asked her if she was an actress. When McGowan responded that she wasn’t an actress, the woman asked her if she wanted to be one, so she gave the woman her number, and that is how she landed her role in The Doom Generation. “It turned out the woman was the producer friend of a director I hadn’t heard of. Gregg had looked far and wide for the lead in his upcoming film The Doom Generation and hadn’t found her yet. I was undecided, but I gave the woman my number. They called for about a week trying to get a hold of me. It was my friend Joshua from Class of 1999 who convinced me to go meet with the movie people,” she wrote in her memoir Brave.

9. She Didn’t Really Want to Play Paige on Charmed

The big reason she took the role of Paige on Charmed was because her blacklisting was still hanging over her and it had been years since she had worked in Hollywood. It didn’t help that the hours were grueling and, while Paige grew and matured over the course of the series, Rose did not. Because so many shows don’t survive a major cast change, Rose felt a lot of pressure. She knew that viewers had to fall in love with her character otherwise the crew would be out of jobs, so she made herself look as non-threatening as possible. She gained 10 pounds so that she would look more approachable.

Rose spent the first nine years of her life in a cult, Children of God, in Italy, but once the cult started advocating child-adult sex, her dad decided that it was time to leave, so he packed up Rose and her sisters, Daisy and Nat, and his second wife Esther and fled in the middle of the night. The cult sent people to find them while they were still living in Italy, but Rose and her family never went back. Instead, they moved to Colorado.

Rose showed exceptional intelligence at a young age. While other kids would have been busy watching cartoons at the age of three, she learned to read. By the time she was six, she was reading Edgar Allan Poe’s The Raven and The Tell-Tale Heart. While she could read at a really young age, she didn’t learn certain practical things like tying her shoes until much later.

6. She Sold Her House to Pay Legal Bills to Fight Harvey Weinstein

After coming out and publicly accusing Harvey Weinstein of raping her in 2017, the Charmed star had to sell her house in the Hollywood Hills to pay her legal bills. She claims that Weinstein never made her sign a non-disclosure agreement even though a lawyer had once told her that she did. “It’s really scary, I’m having to sell my house right now to pay legal bills fighting off the monsters,” McGowan told Entertainment Weekly.

5. Her Dad Had Two Wives

The Scream actress lived with a cult, Children of God, for the first nine years of her life. During this time, her father was married to her mother, but at one point, he decided to take a second wife. “One day my father said to my very young mother, ‘Saffron [my mother’s name in the cult], I want to be married to this woman as well,” she wrote in her memoir Brave. “It must have been crushing. She had no choice, and he took another wife. That’s how my four youngest siblings – two full and two half – are so close in age.”

Rose was blacklisted in Hollywood after Harvey Weinstein raped her. In her memoir, she wrote, “I started to hear rumblings around town. Snippets here and there. The monster was blacklisting me. I heard he called every other studio and independent producer in town and said, ‘Don’t hire her. She’s bad news.’” She continued, “So many people heard about what happened. It had spread like wildfire through Hollywood. One assistant tells another assistant, one producer tells another producer, and on and on. It seemed like every creep in Hollywood knew about my most vulnerable and violated moment. And I was the one being punished for it. It’s like being assaulted over and over again.”

2. Fame Messed Her Up

According to The Doom Generation star, fame really messed up her up, but she did her best to make sure that it didn’t change her. “It f*cked me up. It didn’t f*ck me up in terms of turning into a cliche. I was never arrested, I never did any of that stuff. I had always wanted to go dance on a table in a red dress but because of the environment at the time—the internet was crazy, it was the Lindsay Lohan era—I just left. I was like, ‘Peace out, losers. This is not my bag. I’m not playing this game. I will not be for sale.’ I had a publicist that was like, ‘Why don’t you call me one day when you’re looking cute?’ I was like, ‘Excuse me?’ She said, ‘We’ll send our photographer down so we can get coverage, you know if you’re in a store and you look cute.’ I was like, ‘What?’ I thought about it for about two seconds and was like, ‘I absolutely cannot do that,’” she told Gawker.

1. Complicated Relationship with Her Parents

According to Rose, her father was both verbally and physically abusive, and after her parents split up, her mother would become romantically involved with abusive men. Following her parent’s divorce, Rose would bounce back and forth between living with her mom and her dad. Living with her mother was difficult because of the men that her mother would get involved with but living with her father wasn’t easy because of his verbal and physical abuse. As a teenager, her dad would call her a “whore” regularly and made her sleep in a closet. One night, he grabbed her by the neck and dragged her out. She continued to live with her father until she was 15 and moved to Hollywood to pursue an acting career. 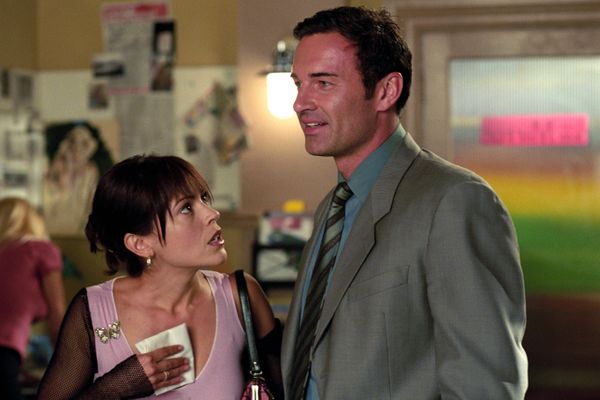 Things You Didn’t Know About Charmed