12 Things You Didn’t Know About The Big Bang Theory

The American comedy The Big Bang Theory first aired in September 24, 2007 and originally starred friends and scientists Leonard Hofstadter, Sheldon Cooper, Raj Koothrappali, and Howard Wolowitz.  When the bubbly-blond-aspiring-actress Penny moves in next door, hilarity ensues.  The cast has evolved over the show’s eight seasons and now includes Bernadette Rostenkowski-Wolowitz as Howard’s wife, and Amy Farrah Fowler as Sheldon’s girlfriend.  The show was created by Chuck Lorre and Bill Prady and has quickly become the favorite comedy on TV, however there may be some things you don’t know about your favorite group of “nerds”. Check out 12 Things You Didn’t Know About The Big Bang Theory.

12. Would the Real Penny Please Stand Up?

In the first pilot, which never aired, the role of Penny was originally played by Amanda Walsh.  Penny’s character was actually named Katie, a sarcastic and pessimistic makeup artist.

Actress Carol Ann Susi was definitely heard but not seen when she played Howard’s mom through the running of Big Bang.  Her character however died in the show after Susi sadly passed away from cancer in November, 2014.  After her death, a picture of her appears on  Leonard and Sheldon’s fridge.

Before starring in The Big Bang Theory, Melissa Rauch (Bernadette) was a standup comedian and appeared at comedy studios across New York including Hamburger Harry’s, the same stage where Zach Galifianakis performed for the first time.  She is also an avid fan of Disney Land and goes to Space Mountain whenever she needs a pick me up.

When Wil Wheaton’s house was featured in the show, his house number was 1701, the number which appears on the hull of the USS Enterprise from Star Trek: The Next Generation, the show of course that he appeared in when he was younger.  Amy’s apartment number is 314, which is a reference to pi (3.14).

In the first season, Raj, Howard, and Leonard are competing in the Physics Bowl and looking for a fourth teammate who isn’t Sheldon.  Raj thinks Mayim Bialik would make a great addition and says: “You know who’s apparently very smart, is the girl who played TV’s Blossom. She got a PhD in neuroscience or something.” Leonard rejects his idea and argues: “Raj, we’re not getting TV’s Blossom to join our physics bowl team.” Well they got her to join the Big Bang Team in 2010.

The Big Bang Theory is cleverly disguised as a Roseanne reunion.  Johnny Galecki (Leonard) appeared on Roseanne as David Healy from 1992 to 1997 and dated Sara Gilbert’s character Darlene Conner.  Gilbert appeared on The Big Bang Theory for eight episodes as Leslie Winkle, Leonard’s love interest.  Two shows and about ten years later, they were still kissing on air.  Laurie Metcalf played Jackie Harris on Roseanne (Darlene’s aunt) and went on to be Sheldon’s mom in Big Bang.  Will Roseanne herself make an appearance next?

Actors often get injured or have children during the running of a show and directors have to find creative ways of filming them or altering their plot lines.  In season four, Kaley Cuoco-Sweeting’s character was left out of a few episodes because Cuoco-Sweeting broke her leg while horseback riding.  After her accident, the show had her stand behind a counter to hide her injury.  Similarly, in season six, Mayim Bialik (Amy) injured her hand while driving and the director found ways to cover her hand while shooting.

From 2008 to 2010, Big Bang Theory’s Kaley Cuoco-Sweeting (Penny) and Johnny Galecki (Leonard) dated.  In 2013, she married Ryan Sweeting, but her character Penny is currently engaged to Galecki’s character Leonard.  So they stopped kissing in real life, but continue to make out on air.

When The Big Bang Theory was filming season three, it became known that a new show was airing in Belarus called “The Theorists” which was identical to Big Bang in its premise and characters.  The production company of Big Bang would not have been able to sue because the show was owned by the Belarus government, but upon hearing that the show was a replica, the actors resigned and it was cancelled.

It appears that some real scientists are big fans of The Big Bang Theory as Brazilian biologists named an orchid bee the Euglossa Bazinga in 2013 in tribute of course to Sheldon’s joke tagline, Bazinga!

While Johnny Galecki (Leonard), Jim Parsons (Sheldon), Kunal Nayyar (Raj), and Melissa Rauch (Bernadette) all play characters with PhDs, Mayim Bialik (Amy) is the only cast member who actually earned a PhD.  In 2007, she received a PhD in Neurocience, with a focus on hypothalamic disorder in children with Prader-Willi syndrome.  She took on the role of Amy in 2010 who is also a neuroscientist.

While the rest of the cast’s last names have been stated throughout the show’s last eight seasons, only Penny’s last name has not be included in the running of the show.  Maybe with her and Leonard’s upcoming wedding, it will finally be revealed?  Or maybe she has only one name like Madonna? 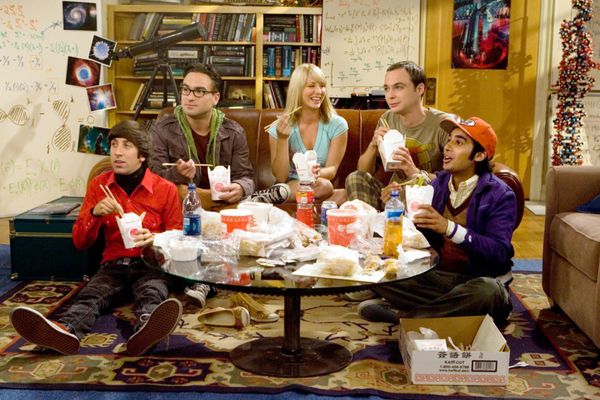