The Real Housewives franchise first started back in 2006 and has grown exponentially since. The women who appear on the show open their lives up to viewers — this includes showcasing their everyday family life and relationships. It’s not easy to have cameras poking around in a marriage which is why reality television is usually deemed a curse, but that’s not always the case! While a good chunk of the couples we’ve seen are no longer together, there are plenty who are! This isn’t all of them, but here’s a brief list of 15 Real Housewives couples who escaped the reality TV curse!

Heather Dubrow was a main cast member on The Real Housewives of Orange Country for five seasons from 2012 to 2016. During her time on RHOC she appeared alongside her husband, Terry Dubrow, who is famous in his own right as one of the most reputable plastic surgeons in America. He even has his own show Botched on E! Even though both stars are quite immersed in the world of reality TV, they’ve managed to keep their relationship not only intact, but quite strong! No doubt there have been a few bumps along the way, but nothing has come close to tearing them apart. They’ve been married now for 18 years and share four children together!

Former Real Housewives of New York star Alex McCord has stepped back from the spotlight and is currently living a much quieter life in Australia! She appeared on the Bravo reality show for four seasons until she was unceremoniously fired. While on the show, McCord and her Australian husband, Simon Van Kempen, butted heads with a lot of their co-stars. The two are parents to two children, Francois and Johan, and will soon be celebrating their 17th wedding anniversary!

Reigning queen of Beverly Hills Lisa Vanderpump and her husband, Ken Todd, have been a big part of the Real Housewives franchise for seven seasons. The powerful couple even got their own spin-off show, Vanderpump Rules, to focus on one of their L.A. restaurants, SUR. The British restaurateurs have the longest standing marriage in the entire franchise as they’ve been married for an impressive 35 years! Usually a reality show and even just the Beverly Hills lifestyle can come between a relationship, but for Lisa and Ken it seems to have the opposite effect! These two truly are best friends. Lisa and Ken share two children together, a daughter Pandora and an adopted son, Max.

Teresa Giudice and her husband Joe have been making headlines not only for their stint on The Real Housewives of New Jersey, but also for their legal troubles involving multiple fraud charges. Both reality stars served time in a federal prison; Joe is currently serving time on his 41-month sentence. Teresa and Joe have known each other since they were 16 and had their first date at 17, but didn’t start seriously dating until she was 23. They’ve now been married for about 18 years and share four daughters together, Gia, Gabriella, Milania, and Audriana.

Former model Kristen Taekman was on The Real Housewives of New York City for season 6 and 7. Her time on the show was filled with a lot of drama, some of which involved her sometimes stressful relationship with her husband Josh Taekman. After season 7 wrapped up she was suddenly thrust back into the spotlight when her husbands name showed up on a list of members in the Ashley Madison leak. After initially denying his involvement, he eventually made a public apology to his wife and family, and the couple are still going strong! They’ve been married for almost 12 years and have two children together.

We’re super excited because this O.C. Housewife is set to return to The Real Housewives of Orange County for season 12! She first appeared on the show for one season back in 2013 and was well known for her dedication to Christianity and her family. Honorable mention to her pot smoking, fairy dusting mother Judy who quickly became a fan favorite on the show! Lydia has three sons, Stirling, Maverick and Roman with her husband, Doug McLaughlin, who also appeared on the show. Lydia and Doug have been married for almost 11 years!

Fashion mogul and Yummie brand creator Heather Thomson was on The Real Housewives of New York City for three seasons before she unexpectedly announced her departure. During her short time on the show viewers got to see small glimpses of her marriage to Jonathan Schindler. The two seemed like opposites as Thomson was loud and outspoken and Schindler was quiet and polite, but nonetheless their relationship was solid. When she left the show she became the topic of tabloid gossip that suspected her marriage was in trouble, but she’s refuted these claims and is still happily married. They’ve now been married for nearly 15 years and have two children together, Ella and Jax.

Real Housewives of Beverly Hills star Kyle Richards is married to real estate mogul, Mauricio Umansky. The power couple have been appearing together on the reality show since it first aired back in 2010 and are no doubt one of the strongest marriages in the entire franchise. Despite falling into a tabloid trap of rumors accusing Mauricio of infidelity, these rumors were fiercely denied by both Kyle and Mauricio and it seems these two are stronger than ever. They’ve been married for over 20 years (and counting!) and share three daughters together, plus one from Richards’ previous marriage.

When Melissa Gorga and her husband Joe, who is also veteran New Jersey Housewife Teresa Giudice’s brother, joined The Real Housewives of New Jersey they brought a lot of drama to the show. Now that things between the family are better, viewers get to see a lot more of their storyline dedicated to their relationship! The couple have been appearing on the show together for the past five seasons and proved to have one of the cutest marriages that has withstood a lot, and we mean a lot of drama! They’ve been married for 12 years and have three children together, Antonio, Gino and Joey.

The Young and the Restless star met her husband Vincent Van Patten while working on Y&R together back in 2000. Vince doesn’t make many appearances on The Real Housewives of Beverly Hills, but he’s seen by her side now and again. Eileen has been a regular cast member for the past three seasons since 2014. They’ve now been married for an impressive 13 years and share one son together. Eileen is also a stepmother to two boys from Vince’s previous marriage.

Lizzie Rovsek was only on The Real Housewives of Orange County for season 9, but she’s made plenty of appearances since then as a friend. During her time on the show, she appeared alongside her handsome husband, Christian Rovsek, whom she married back in 2009. The two of them are picture perfect together with their two sons, Preston and Kingston. The former Miss Kentucky still runs her swimwear company while Christian is involved in real estate and his construction company.

Although Jacqueline Laurita can be a controversial cast member on The Real Housewives of New Jersey, she has one of the most solid marriages in the franchise. These two have been through a lot together, from money troubles to raising an autistic son. Fans love Chris because he doesn’t get involved in the women’s drama, but isn’t afraid to stick up for his wife. He stands by her through all the hot headed New Jersey drama, is an amazing father to their two sons and a great step-father to Jacqueline’s first child, daughter named Ashley from a previous marriage. The couple have been married for 16 years and counting!

This Beverly Hills Housewife has a husband who’s probably better recognized on television than her! Lisa Rinna has been married to Hollywood actor Harry Hamlin for 20 years and together for 25! The couple have two daughters together, Delilah and Amelia. Not surprisingly, Hamlin doesn’t appear on the show often, but he does make appearances and it’s pretty clear these two have a strong relationship. Even Lisa Rinna admits she can be a lot to handle sometimes and hard to defend, but Hamlin does it anyways! We’re sure we’ll be seeing more of this couple on The Real Housewives of Beverly Hills in the future.

Jill Zarin is one of the original cast members from The Real Housewives of New York City. She remained on the show for the first four seasons until she was fired alongside three other cast members during an entire cast shake up. A quick stroll through Jill’s Instagram will show she absolutely adores her husband, Bobby Zarin. The couple just recently celebrated their 16th wedding anniversary! These two have been through a lot together, mainly Bobby’s thyroid cancer diagnosis in 2009, and then again in 2015 when the couple found out the cancer had returned and spread to his lungs. Jill is a stepmom to Bobby’s three children, Jonathan, David and Jennifer. Meanwhile Jill has a daughter, Allyson Shapiro, from a previous marriage. Update: We’re sad to report that Jill’s husband passed away. Our thoughts are with her and her family.

This Missouri native, O.C. Housewife just recently decided to end her time on The Real Housewives of Orange County after appearing on the show for only two seasons (10 and 11). We can understand why though, because she just welcomed her first child, a daughter named Aspen with husband, MLB star Jim Edmonds. Aspen is Jim’s fifth child as he has four children from two previous marriages. A big part of her storyline in season 11 was undergoing in vitro fertilization and finding out she was pregnant. The couple had only been married for about a year when she joined the cast and they caught a lot of flack for how their relationship was perceived (particularly Jim’s nonchalant behavior), but the two are still happily married and raising their daughter together! 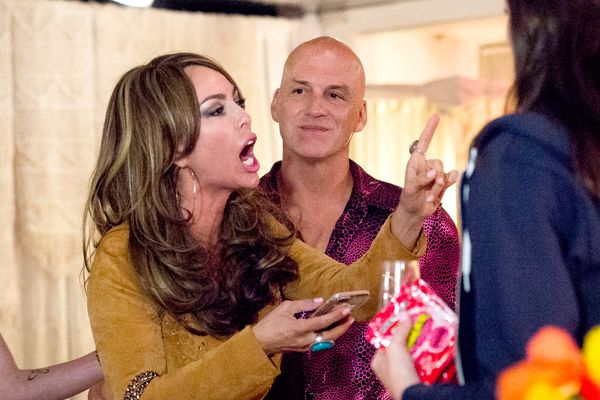