ABC’s long running medical drama follows the mishaps and love lusts of a group of misfit interns. As the show progresses, they compete for surgeries, residencies, love, all while experiencing the challenges and hardships of life in the hospital. Viewers were recently outraged when popular cast member Patrick Dempsey (Derek Shepherd aka McDreamy) was killed in the season 11 finale, but the series is pushing on without him. After 13 seasons on air, there have been lots of secrets and drama that have made their way off set and into headlines. Find out 12 Secrets That Escaped Grey’s Anatomy‘s Operating Room!

Shonda Rhimes got the idea to create the show Grey’s Anatomy because she was obsessed with watching surgical shows on the Discovery Channel. She took the premise of the show from something a doctor once told her about how hard it is to shave her legs in the hospital shower. Rhimes took this and ran with it. When it came time to come up with a name for the show, she thought about naming it “Complications, but then settled on the title of Grey’s Anatomy as a play off of Henry Gray’s human anatomy text book, “Gray’s Anatomy of the Human Body” (1858).

After reviewing the pilot episode for Grey’s Anatomy, it was decided that another male doctor was needed and the role of Alex Karev (Justin Chambers) was created. Since his scenes were added after the pilot was finished, they were either digitally altered or re-shoots.

Originally, Shonda Rhimes was looking for a tiny blonde woman with curly hair to play Bailey. But, the role was given to Chandra Wilson. Rhimes said she knew Wilson was the perfect match the second she came in and opened her mouth, “This character was the only one written with a description in mind. I pictured her as a tiny blonde with curls. I thought it would be unexpected to have this sweet-looking person open her mouth and say tough things. But then Chandra Wilson auditioned, and she opened her mouth and said those same things. I thought, ‘That’s exactly who Miranda is.'”

In 1999, Katherine Heigl (Isobel Stevens) appeared in Roswell as Isabel. The characters’ similar names are just the beginning of their similarities. Both roles interact with a deceased lover, are obsessed with holidays, wear pink strapless dresses, and have a lover named Alex.

Shondaland is known for secrecy and in order to keep a lid on the show’s development, the characters’ names were changed during auditions. Also, the cast members didn’t always know what was coming up for their character. Shonda knew she wanted a huge surprise at the end of season 1, but she didn’t inform Ellen Pompeo or Patrick Dempsey about the fact that his character would be secretly married. That was something she didn’t find out until halfway through filming the season!

Rob Lowe was offered the part of Derek Shepherd, but he turned it down. Patrick Dempsey accepted the role only after he didn’t get the part of Dr. Chase on House, M.D. Isiah Washington also tried out for McDreamy, but was assigned the role of Preston Burke.

Both Eric Dane (Mark Sloan) and Chyler Leigh (Lexie Grey) wanted to leave Grey’s Anatomy in Season 8; Leigh wanted to spend more time with her family and Dane got a part in The Last Ship. As a result, there were both killed in the infamous plane crash.

Both Kevin McKidd (Owen Hunt) and Brooke Smith (Erica Hahn) have worked with Patrick Dempsey (Derek Shepherd) on other projects. McKidd and Dempsey fought over the bride, Michelle Monaghan, in Made of Honor (2008). Smith and Dempsey both appeared in a period film on the women’s suffrage movement entitled Iron Jawed Angels (2004).

Originally Addison Shepherd (Kate Walsh) was only scheduled for 5 episodes, but she continued as a regular character in Seasons 2 and 3 and then went on to star in the spinoff Private Practice.

Performing surgeries at Seattle Grace was not the first time Kate Walsh (Addison) and Sandra Oh (Christina) have worked together. They both appeared in Under the Tuscan Sun (2003) as lesbian partners. Walsh’s character Grace also worked at a hospital.

In the second episode of Season 1, Meredith is looking for a roommate. She posts an announcement at the hospital which says “absolutely no Bush supporters need apply.”

While filming Season 5, T.R. Knight, known to Grey’s fans as George O’Malley, wanted to be released from his contract because he believed his character was in a rut and absent from any important story lines. He also noted that he and Grey’s creator Shonda Rhimes had a breakdown in communication. His character was written out of the show and, after being hit by a bus, there will be no reappearances from George O’Malley.

The majority of the cast members have all been patients at Seattle Grace. Meredith Grey had an appendectomy (and other procedures); Christina Yang for an ectopic pregnancy; Alex Karev with a gunshot wound; George O’Malley after he was hit by a bus; Addison Montgomery Shepherd for poison oak; Miranda Bailey delivered her baby; Richard Webber had brain surgery; Mark Sloan sutured himself after being punched by McDreamy; Derek Shepherd was treated for gunshot wounds; Callie Torres had chicken pox; Owen Hunt gave himself staples; and Isobel Stevens was treated for cancer. 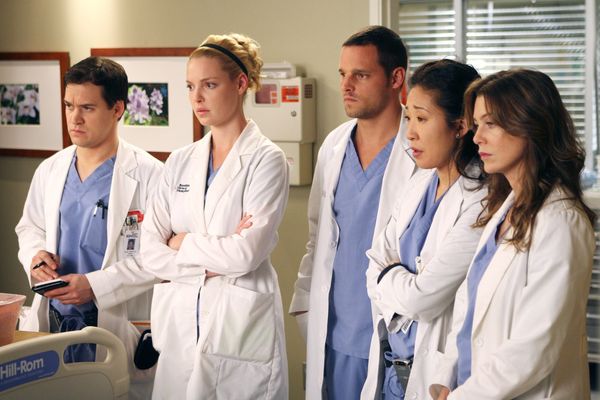