5 Days Of Our Lives Spoilers For The Week (July 10)

Summer storylines heat up on Days of Our Lives (DOOL) this week! Suspicions run high around the Deimos murder case, Nicole has another flashback; Abigail digs around; and Chad makes Theo an offer he may not be able to refuse. Learn about these stories and more in the below DOOL storylines for the week of July 10th.

Residents of Salem will become quite suspicious this week, and Dario seems to be the focus of it all. He’ll try and stay cool about it all, but just might fail miserably. Cops Rafe and Hope have a weird inkling when it comes to Dario. In fact, Hope warns Abigail and she starts to dig around the situation.

Abby will get a bit worried after Nicole has a flashback that reveals she found money during the party when Deimos was murdered. To boot, Eric will help her remember that it was Dario’s. Abigail will dig around why he had such a huge amount of cash on him that night. While Dario tries to spin it all, Abigail will feel she can’t trust him. Her spying will unveil some interesting facts about Dario.

3. Paul Has Sonny’s Back

Paul will let Sonny know he’s behind him, through and through. Sonny confessed to murdering Deimos and a witness will back his story up. This means JJ is no longer on the hook, but he won’t give up on finding the real murderer that easily. Lani, Rafe, and Hope will help JJ as he is in hot pursuit of Deimos’ real killer.

2. Chad Strikes Up A Deal With Theo

Chad will have a key conversation with nephew Theo this week. He places an offer on the table that surprises Theo. Theo isn’t big on embarking on new adventures, but Chad’s offer sparks an interest in him. DOOL spoilers indicate this might have to do with a job at DiMera Enterprises.

Jade and Tripp kiss before she prepares to leave Salem. She just might slip up, but will Tripp learn she’s been lying? DOOL spoilers indicate he may think about backing out of this scheme, but it might be too late as Kayla will already be in deep trouble by the time he re-considers. The good news is, Steve will be on to the fact that someone is framing his sweetness, and will make a promise to find out who is at the bottom of this. This may spell disaster for his father-son relationship with Tripp. 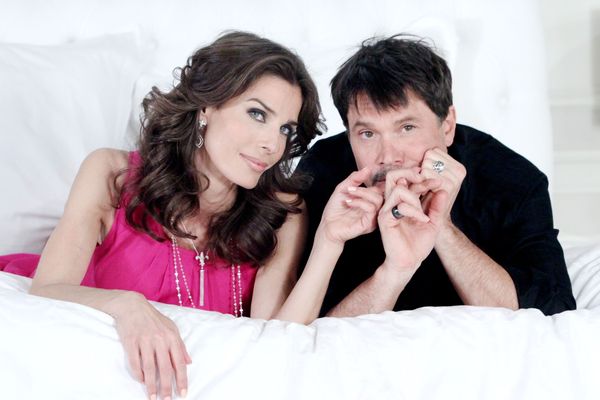