5 Days Of Our Lives Spoilers For The Week (November 13)

After weeks of hinting, internet spoilers, and Sami and Sonny’s mission to Memphis, Will has been found! But, the reunion might not be what most expected. While everyone is happy that Will is alive, another Salemite struggles for his life this week. Learn more about the drama and intrigue on tap this week for Salem with the Days of Our Lives (DOOL) spoilers for the week of November 13.

Will is found this week, but he won’t recognize Sami or Sonny. Sami will try and remind him that she is his mother, but Will won’t believe it. He’s found working at the bar and Susan will rush in and the two will hug. Will declares that she is his mother. It seems that Susan has brainwashed him into believing he is E.J. Sami will be infuriated and punch Susan during a confrontation. It is something that Days’ fans won’t want to miss.

4. Aftermath Of Finding Will

There is a celebration that Will is found, but a whole lot of aftermath to this story. Paul confesses to John that he kept Will’s resurrection a secret and John will be floored. John calls Marlena to tell her the good news and Marlena is surprised, but happily. So is Gabi, and she is eager to reunite Will with his daughter Arianna Grace.

While pursuing someone he thought was a criminal, J.J. realizes he shot Theo Carver and the young man was not armed. Theo will need to fight for his life in the hospital and J.J. will struggle with the terrible mistake he has made. Jennifer will try to console him, he will have Lani by his side; however, Abe Carver lets him have it and verbally attacks J.J. over what he has done to Theo. Hope takes J.J.’s badge and gun from him this week, relieving him of his duties on Salem’s police force.

As Theo is in serious condition, Chad and Abigail are grief-stricken. Chad blames Andre for the situation, but Andre maintains he is innocent in all of this. Meanwhile, Kate tries to cover up any links to Theo. She wants to ensure her partnership with the youngster remains hush-hush and she lets Tripp know this.

Speaking of Tripp, he tries all he can to be there for Claire this week. With Theo fighting for his life, Tripp becomes not only someone Claire can talk to, but also her main support system during this difficult time. It seems that Theo’s situation is quite serious and the entire Carver family, as well as Claire, is devastated by the situation the young man is in right now. 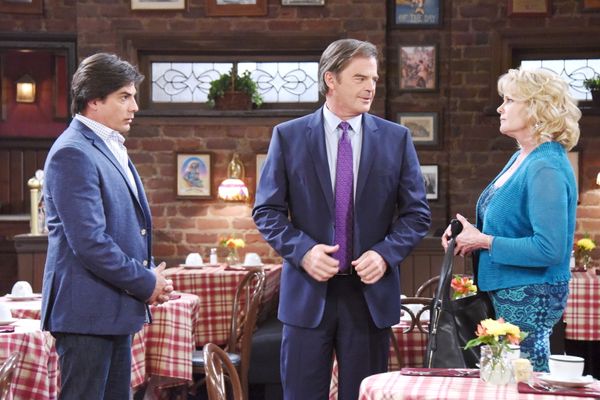