It’s Monday, which means it’s time for a little teaser on what will happen in the land of General Hospital (GH) this week. It’s important to note, there will be no new episode today (July 4th) due to American Independence Day (a rerun of the Nurse’s Ball will be shown). However, the other four days of the week will air all new GH episodes, jam packed with drama, romance and some mystery. Learn more about Nikolas, Jason, Sam, Ava, Kiki, Dillon, Morgan and more in the below GH spoilers for the week of July 4th.

6. There’s a New Cassadine in Town

When Alexis insists that Sam stay in England, JaSam decide to head out to Cassadine Island. Ava and Nikolas are already there and Ava is completely creeped out by the place. Nik insists that they are safe…and he is wrong. JaSam eventually find them there and that is when all four are introduced to “Theo,” who is really Valentin Cassadine, played by James Patrick Stuart. Cassadine is said to be quite dangerous, but are any of the people on this family tree remotely normal? As such, Nikolas, Ava, Jason and Sam are trapped in the mansion by Theo. On a related note, Laura catches Spencer trying to call Nikolas on his phone and tells Kevin about it.

Another new GH character debuts this week and audiences are finally introduced to the infamous, Claudette. She comes to Port Charles this week and has an interview with Crimson. Maxie initially likes her, as Claudette interviews under the name of CJ; however, Maxie finds “CJ” with Nathan at his hotel room, and doesn’t handle the situation very well. Maxie and Nathan worry about Claudette later and what she will do to them. Maxie also turns to Griffin for advice and they chat about his priesthood past.

Speaking of Griffin, the priest will have a very hard week. First off, Nathan interrogates him when it comes to the serial killer case, even though Nathan had shot Griffin once. Despite all this, while Dr. Mayes seemed like the perfect candidate as the killer, it turns out he is not and becomes another victim as the week unfolds. Nathan starts to dig around deeper and Liz steps up to the plate to defend Franco claiming she is certain that he is not the killer.

3. Finn Gets By With A Little Help From His Friends

Tracy and Hayden team up to help Hamilton Finn and forget about their differences. Finn seems to have an alibi when it comes to the GH serial killer case, but now he’s hoping the hospital drops their trespassing charges and of course, the suspension. Finn also gets news that his life-saving drugs are in short supply and he does not have the money he needs for research. Tracy and Hayden help him out tremendously this week: Tracy gets Finn the meds he needs and both get him out of jail.

Alexis is determined that her hubby pay for his crimes. She backs him into a corner this week and Jerome makes a vow to her that he might not be able to keep. Julian becomes suspicious when Alexis makes a big move. While Alexis tries to cover this up by telling him things are okay. Julian begins to feel that the walls are closing in on him and thinks about making a break for it. Sonny goes back and forth on whether or not to allow the cops to handle this situation with Julian or if he needs to take matters into his own hands.

Dillon gets jealous when he sees Kiki and Morgan together while Kristina says Parker’s name while she’s with her boyfriend Aaron. Nina offers Curtis an intriguing job, but Curtis wants to be a police officer again. Will Jordan give him an opportunity to do this? 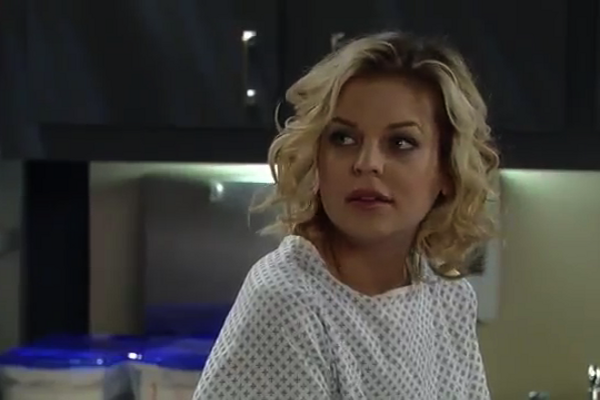