6 General Hospital Spoilers For The Week (May 28)

Calling all General Hospital (GH) fans! What’s on the pipe this week for the land of Port Charles? Tons of surprises, some interesting developments, and plenty of drama! Please note: Monday’s episode is a repeat from the April 13th episode this year. The repeat is due to the Memorial Day holiday in the United States. Regardless, below are six GH spoilers for the week of May 28th.

Things kick off on a bad note for Carly during her court proceedings when she realizes that the new district attorney Margaux, played by new GH cast member and Young and the Restless alumna Elizabeth Hendrickson, is sure to be a thorn in her side. Margaux is clearly going to give Carly and her lawyer Diane some grief in the coming weeks and months ahead.

Drew continues with his memory mission plight this week. While Andrew will give him another warning about this, so will Franco. In fact, Drew and Franco will fight over the riskiness of pursuing this and the dangerous repercussions around it all. Sam will also get scared later on in the week as she finds out more about what is on the horizon. She’ll panic over the idea of losing Drew.

GH spoilers indicate that Liesl Obrecht will be upset about the secrets Peter has been hiding, and she’ll let this anger get the better of her. Seems like she may be gearing up for a plot of revenge. After all, her son Nathan is dead, and she seems to be pointing the finger of blame towards Heinrik.

Ava is going to try and chat with Griffin about something this week. GH spoilers indicate she’s trying to change his mind about a decision … could it be about gravitating towards her daughter Kiki? Ava needs to be subtle about it all in order to prevent a fight. Speaking of Kiki, she’ll have more trouble with Dr. Bensch, which may force Griffin to step in. This will not be a good thing for the hospital.

Anna desperately tries to reach out to Peter this week, looking for a way to bond with her son. Heinrik is still confused and hurt about his mother’s abandonment and is reluctant to reach out or make this situation easy for her. This mother/son relationship has some hurdles ahead. Things are sure to get worse before they get better.

A mysterious text comes through Nina’s mobile this week, so perhaps Valentin is reaching out to try and fix their once-again damaged relationship? What could he have up his sleeve? With the countless lies and manipulation, Valentin needs more than just a romantic dinner to fix the mess up he’s made with Nina this time around. 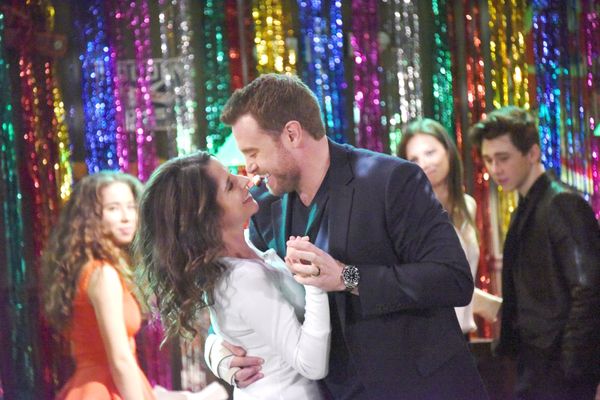