Soap Opera Couples Who Will Break Up In 2018

The land of daytime drama is ruled by romance and love stories. While many individuals hooked up in 2017, no soap opera super couple lasts without some ups and downs. Breakups can lead to makeups, but sometimes couples break up, go their separate ways, and move on to other love affairs. Who will last the long haul next year? Below is a list of 15 soap opera couples that will break up in 2018.

Steve and Kayla are one of the most popular super couples of all time. Their love simply transcends time and most DOOL fans love the fact that this duo remains strong to this very day. Yet, this is the land of the soaps and super couples break up all the time in daytime drama. In fact, a super couple breakup happens to make plots and storylines that much more interesting. Kay and Patch have broken up in the past, only to reunite. They seem far too happy with each other as of late, which is always a strong sign that trouble is not too far behind. They will most likely get back together at some point, but 2018 may mark another break up for one of DOOL’s most popular twosomes.

Nina is so smitten with Valentin and his daughter Charlotte. Even though he’s messed up more than a few times, he seems to reel Nina back in thanks to the little family they have created along the way. However, Valentin may run out of luck come 2018. Nina is at the end of her forgiving rope, and with Cassandra in the mix, Valentin is sure to stumble and ruin things with his wife in the new year.

These two are already walking on a slippery slope. They have great chemistry and get along well, but Tessa has not only hid things from Noah throughout their relationship, she also seems to have something going on between her and Mariah. Tessa and Noah will undoubtedly break up in 2018 and the plot twist around all this will be because of his long-lost sister, Mariah.

Josslyn and Oscar’s parents are far too overly involved in their relationship as it is, and they are both young teenagers. If that doesn’t scream a 2018 break up, not sure what would. They do make a cute couple, but at the end of the day, both will move on to bigger and brighter relationships. It’s simply what happens in soap operas.

Anyone could see this couple was bound for a break up the moment they hooked up. It’s just what Nikki and Jack do. Since they first came together in the 1980s, the couple falls in love, only to go their separate ways thanks to Victor. Even though Victor may not treat Nikki the way he should, they are simply soul mates. Jack seems to be the third wheel in this love triangle that always gets left behind.

Andre and Kate hooked up in 2017 as more a business venture than a true love affair. In typical soap opera fashion, these two corporate tycoons seem to love money and power more than each other. Despite this, feelings are emerging between the two and most avid DOOL fans can see a break up happening in the near future. Not to say that Andre and Kate won’t eventually find their way back to each other and reunite for love, but a break up in 2018 is most likely on the agenda for these two. It will help them to see that they do have real feelings for each other.

The two Jasons’ storyline on GH has been a riveting one for fans. However, with the truth being revealed and the twin factor now in full play, it’s clear that Port Charles no longer has two Jasons. As Billy Miller’s Jason has been revealed as Morgan’s twin brother Drew, it’s time for Sam to make a choice. She seems to be leaning towards Drew as of late, but we all know that Sam’s true love is Jason Morgan. It’s only a matter of time before she sees that for herself and leaves Drew behind.

Sure, there are many Y&R fans who love Billy and Phyllis together, but with Victoria and his kiddos looming in the shadows, a Philly breakup is inevitable. They almost broke up in late 2017, but Billy was able to talk his way into a reunion. The truth is, Vicky and Billy were made for each other and Phyllis is simply an obstacle in their way. Victoria has been nipping at Billy’s heels as of late to re-ignite their love affair and she will most likely get her way in 2018.

General Hospital’s (GH) super couple of the moment is definitely Maxie and Nathan. They’ve been through it all and are currently living their happily ever after as a married couple. At the same time, all super couples experience blips in their relationship and Naxie is far too happy right now. Doom is sure to linger around the corner and they will most likely hit a bump and break up sometime in 2018. It’s sure to only make these two stronger in the long run.

Who else loves this Young and the Restless (Y&R) May-December relationship? Ravi and Ashley have worked hard to get where they are today. The two are certainly a cute couple that seems to have a lot in common! Unfortunately, cute doesn’t last in the long run when it comes to soap operas. The couple lacks a certain chemistry that Ash has had in the past with other men, which is sure to mean break up come the new year.

For one reason or another, parents don’t seem to like Days of Our Lives’ (DOOL) J.J. Deveraux. He’s cleaned up his act tremendously from when he was younger, but his mistakes while on the police force has turned Abe Carver (Lani’s dad) into a J.J. hater. Add in shooting her brother Theo into the mix, and this spells nothing but breakup for Lani and J.J. in 2018.

Liz and Franco make quite the sweet super couple in the land of Port Charles. Sadly, they will most likely break up sometime in 2018. Why? Well, it’s never a good sign when your boyfriend keeps things from you and Franco’s secret of trying to kill Drew when he was little may come back and haunt their relationship. Speaking of, there are two Jasons currently running around town, both of which Liz has had epic romances with. Unfortunately, each Jason has always rejected her and turned to Sam in the long run. At some point, Sam will have to choose between Billy Miller’s Jason and Steve Burton’s Jason and when she does this will mean a ‘Jason’ of some sort is back on the market. Liz may find herself drawn to whomever that Jason is.

Eli is currently helping Gabi get over Chad and their spark of a romance seems to be growing. But, will it blossom or fizzle? Eli is a great distraction and an excellent way to get over an ex, but these two DOOL characters lack chemistry when it comes to anything substantial. A break up in 2018 is inevitable.

Sharon and Scott have shared a wonderful new romance on the Y&R. Sharon is smitten and Scott is so into this relationship that he is willing to go against his mother’s wishes. They make a very cute couple, but it’s clear that he and Abby have something that they are trying to bury away. With the reveal that Abby’s boyfriend Zach is a slimy sex ring leader and the two bonding over being held hostage, it’s only a matter of time until Scott leaves Sharon for Abby.

When Sharon gets dumped by Scott, it won’t take long before Nick comes running to her rescue. More obvious than Scott and Sharon breaking up next year is the inevitable doom lingering over Chelsea and Nick’s relationship. The two have made a solid couple and have all the elements a great soap opera romance needs. Except for the full honesty part. Chelsea knows that Christian is not really Nick’s son and that scary little secret is bound to come out soon. When it does and when she’s attached to hiding it from him, Nick will dump her like yesterday’s news and head straight to Sharon. Like he always does. 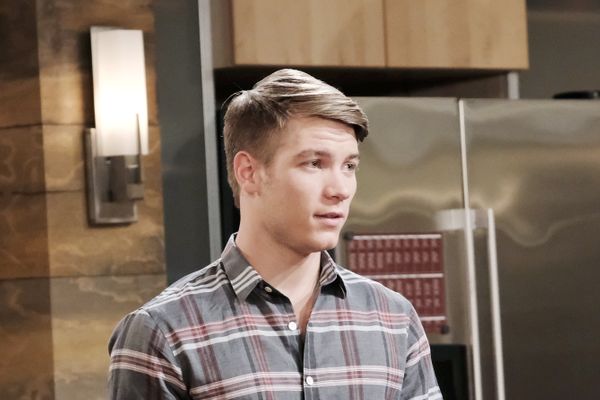