Toby Keith and Tricia Covel (formerly Lucas) have managed to keep their relationship private and normal despite the fact that Toby Keith is one of the most successful country singers in the industry with an impressive 61 charted singles and 21 number one hits. Despite his wide spread fame, status has never gotten in the way of them raising their family and living a low-key life in Oklahoma. This might be due to the fact that their 33-year long marriage predates any of Toby’s country fame. Here’s a look at 7 things you probably didn’t know about Toby Keith and Tricia Covel’s relationship!

It was definitely young love for these two sweethearts! They met at a club when Tricia was only 19, and Toby was 20. In an interview with People, Tricia recalls her first impression of Toby. “He was just one of those larger-than-life guys, full of confidence.” They dated for three years before they got married.

Toby and Tricia have been married for an impressive 33 years. They tied the knot on March 24, 1984, when he was only 22-years-old. Their wedding not only marked the beginning of their marriage, but also made Keith a father to Shelley, Covel’s daughter from a previous relationship. He adopted her after they exchanged nuptials, and the two later had a daughter of their own named Krystal Keith, who’s now pursuing a career in music, and a son, Stelen.

When Keith and Covel first met, he was not the famous country singer he is today. In fact, they were just two ordinary people who met at a bar and fell in love. Keith started his career working in the oil fields, but when the work ended, he decided to focus on building a career in music. His stardom didn’t come easy. Their family went through a lot of financial hardship along the way. “He’d say, ‘Trish, one of these days, my time is coming. Hang in there,” said Covel. His moment came when he released his breakout single “Should’ve Been a Cowboy,” one of the most played country songs from the ’90s.

No couple lasts over 30 years of marriage without a little bit of romance, but when pressed for more details about their relationship and dynamic behind the scenes, Covel said she prefers moments and dates rather than cheesy romance. “Most people think he is just the most romantic person on the planet. He has his moments of charm. It is nice to get a bouquet of flowers, but I’ve told him, ‘Save the money. Roses die in five to seven days. Buy me an outfit, or take me to dinner.”

Toby Keith credits much of his success to his wife who stood by him when everyone else told her to convince him to pursue another career. She didn’t because she believed in him. “Dozens of people told Tricia, ‘You need to go tell your old man to get a real job,” said Keith in an interview with Country Weekly. “It took a strong-hearted and loving woman to say, ‘He’s good enough at music that I’ve got to let him try. And it’ll be a great shot for both of us if he can make it work.'”

In an 2010 interview with Toby Keith, he told People all about the oasis he and his wife, Tricia, had built just outside Norman, Oklahoma. He called it Toby Keith’s Dream Walkin’ Farms, equipped with racquetball, fishing, basketball and a round table for family game nights. The 160-acre ranch has wide open pastures for his dogs to run and horses to graze. He pointed out that it took him and Tricia 12 years to build their dream home. “There was nothing here before. Tricia and I knew what we wanted, and it’s about there now.” They have a 8,900 square foot main house with a theater room, kitchen and a 2,500 square foot cabana for swimming, grilling and relaxing.

After listening to Keith talk about his home life off the road, it’s clear he and Covel are very family oriented. “I absolutely love performing and writing songs, but being at home with my wife, Tricia, and my three kids is the best feeling of all,” said Keith to Country Weekly. They both make sure to spend time with their children and grandchildren. Covel started a signature line of women’s golf apparel with her daughters, Krystal and Shelley, while Keith spent years coaching his son Stelen’s football team. 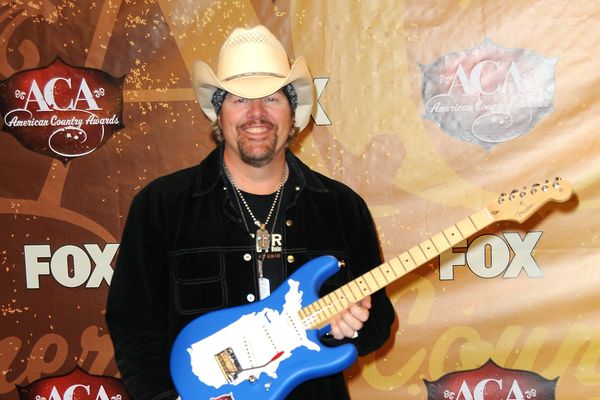