Throw in some wild characters, sizzling situations, unbridled drama and POOF! Instant reality show hit, right? Not so much. It might seem like it only takes an unusual premise and a handful of quirky personalities to capture an audience’s attention, but reality show viewers are becoming more discerning in their tastes as the options keep coming and there are endless picks. To prove this point, here are 8 reality shows that failed miserably, from an entire brood of baby-mamas to celebrities who tried to revive their fame by giving the public a glimpse into their personal lives. Which ones do you remember? Were they right to be pulled or would you have kept watching?

Having 11 children with 10 different women? What could possibly go wrong? And of course it would make for amazing TV viewing, right? Nope. Rapper Shawty Lo pitched the idea of his own reality show to Oxygen who was ready to release the program focused on the rapper, his 11 children, and the 10 different women who were their mothers. If you don’t remember this one, there’s a reason for that. The NAACP as well as other groups actually lobbied for the show to be pulled before it even hit the air. Supposedly, Shawty Lo has been trying to get other networks to pick it up, so if this piques your interest, there may be hope yet. And who knows, by that time it might be 13 kids with 11 women or 20 kids with 17 women.

There are many reasons why reality shows get canned, but having your show cancelled because one of the network executives is rude at your dinner party seems just about right for Liza Minnelli and David Gest. The entertainment business power-houses tied the knot in a star-filled ceremony and creeped out the public with one of the ickiest kisses even caught on cam. So why not turn the entire thing into a reality show? SMH! However, the show wasn’t meant to be and, although Liza claimed it was because of the executive’s bad behavior, VHI claimed that Minnelli and Gest were uncooperative and the show was cancelled after just one week of filming. Now that the couple have split, the world will be deprived of further super-creepy on-cam make-outs…thank goodness.

6. Megan Wants to Marry a Millionaire

Match-making reality shows are nothing knew and ones where a contestant is looking to hook up with someone rich, famous, super-hot, or all of them combined is just as done, done, done. So when Megan Hauserman, an alumni of Rock of Love: Charm School, got her own show about finding her Mr. Perfect-Who-Also-Is-Loaded, the world thought, meh. But the show was pulled when one of the contestants, Ryan Jenkins, was charged with murdering his ex-wife (the details are sad and awful). He ran off to Canada where he committed suicide. Cancelling the show after that was obviously the right choice. But getting things back to a lighter note: There’s still lost of potential for upcoming additions, including Sarah Wants to Marry a Millionaire and Katie Wants to Marry a Millionaire and Whoever the Heck Else Wants to Marry a Millionaire.

If you believe that money can’t buy you love, then maybe Mr. Personality was more to your taste. The show focused on a group of men all attempting to win over the heart of Hayley Arp. The gimmick? All of the men would be wearing masks throughout the show in order to hide their appearance from Hayley forcing her to choose someone based on their personality alone. The kicker? The host was Monica Lewinsky. Ya know, because she’s totally known for healthy relationships. Yeesh.

4. The Houstons: On Our Own

This one is rough on so many levels. Losing Whitney Houston was a shock to the world and a devastating blow to her family, which included her daughter Bobbi Kristina Brown. The decision to turn their grief and attempts to pull their lives together after their loss was a weird choice and one that had viewers tuning in with trepidation. Wanting to see Bobbi Kristina doing well and the family surrounding her with support and love, instead it was obvious that there were deeper issues that needed to be dealt with and not on-screen. The show was cancelled after just one season and ultimately Bobbi Kristina passed away tragically and far too young.

When The Salt-N-Pepa Show came onto the screens, Pepa was ready to be just as wild as always, wanting to make the show a drama-filled success by featuring her and her friends hitting the dating scene. So, yeah, maybe someone would want to watch that. Salt, on the other hand, has now found a deeper religious connection and is no longer into the wild ways of her past. And that was that. Not much else to it and viewers were not into it at all which saw the show pulled after just one season without much of a fuss.

Winning an Academy Award for Best Original Song doesn’t guarantee reality show success. Just ask “Hard Out Here For a Pimp” by Juicy J and DJ Paul of Three 6 Mafia. The pair got their own reality show on MTV after their Oscar win and they brought along their live-in group of Project Pat (Juicy’s brother) and their personal assistants Computer and Big Triece. The show was supposed to give audiences a glimpse into their Hollywood dominating rap success and their “hood antics”…but it just didn’t happen and the show was eventually pulled.

Perhaps the most famous of all cancelled reality shows would be the Real Housewives of D.C. This show was pulled after one season. It might seem odd for an addition to one of the most successful reality show franchises to have not been given a fighting chance, but if you remember, that’s because two of the intended stars got their names in the press for all of the wrong reasons before the show hit the air. When Real Housewife to-be Michaele Salahi and her husband, Tareq Salahi, decided to sneak in to the White House during a state dinner. Apparently this all happened while Bravo cameras were rolling, as a result the resulting negative press and legal issues were enough for the show’s creators to pull the plug before the sizzle made it too far on screen. 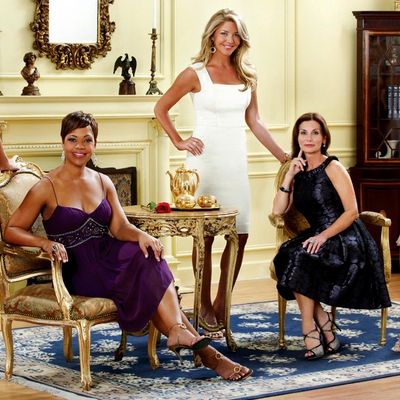