Brad Paisley is one of the best country singers in the business! He’s been producing #1 hit singles since 1999 and is showing no signs of slowing down anytime soon! He set a new record in 2009 for the most consecutive top 10 singles with 32 top 10 singles and 19 #1 hits. This critically acclaimed singer has three Grammy Awards, two American Music Awards, 14 Academy of Country Music Awards and 14 Country Associations Awards. He’s also hosted the CMA Awards a whopping eight times! It’s no wonder Paisley is so popular with such a strong fan base. Some of his biggest hits have been songs like “Mud on the Tires,” “Alcohol,” “Beat This Summer,” “Southern Comfort Zone,” “River Bank,” and “Perfect Storm” — just to name a few! We can’t believe he’s turning 45-years-old soon, but in honor of his upcoming birthday, here’s a look at 10 things you probably didn’t know about Brad Paisley!

Bradley Douglas Paisley grew up in Glen Dale, West Virginia, as an only child to his parents, Douglas and Sandra Paisley. Brad got into country music because his grandfather, Warren Jarvis, taught him how to play guitar and even gifted him with his own when he was only 8. He performed for the first time in front of an audience when he was only 10! The first time he sang was in church, but once he did he said he was “performing at every Christmas party and Mother’s Day event. The neat thing about a small town is that when you want to be an artist, by golly, they’ll make you one,” he said. It became quite clear from a young age that Paisley was incredibly talented. He started taking lessons with Clarence “Hank” Goddard and by the time he was 13 he had formed a band with Goddard and two others called “Brad Paisley and the C-Notes.” By the age of 14 he was a regular on the country radio station “Jamboree USA” and became the youngest person inducted into the Jamboree USA Hall of Fame. “[The Jamboree] gave me a sense of entertainment value for a show as opposed to just wanting to sing and trying to imitate people,” said Paisley. It also helped give him the confidence he needed as a shy “semi-mulleted and malnourished” teenager. 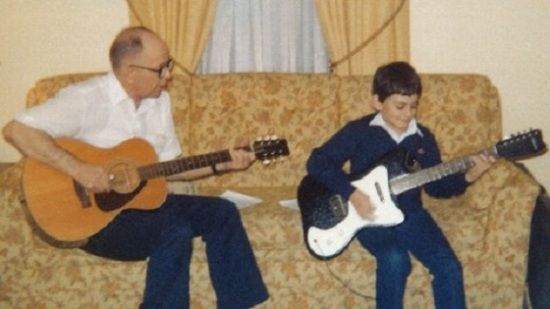 7. How He Met Kimberly

Kimberly Williams starred in Paisley’s 2002 music video for “I’m Gonna Miss Her” and the two hit it off right away. Paisley has admitted that he hired her for the video because he saw her in the film Father of the Bride and he wanted to go on a date with her. In an interview with Redbook, even he admitted he can’t believe she agreed to go out with a self-proclaimed West Virginia hillbilly. “It is crazy! It was all a weird attempt to say ‘hi.’ I just can’t believe it worked!,” he said. They got married in March 2003 in a surprise ceremony in L.A. after a short 9-month engagement. Kimberly and Brad now have two sons together, Jasper Warren and William Huckleberry. 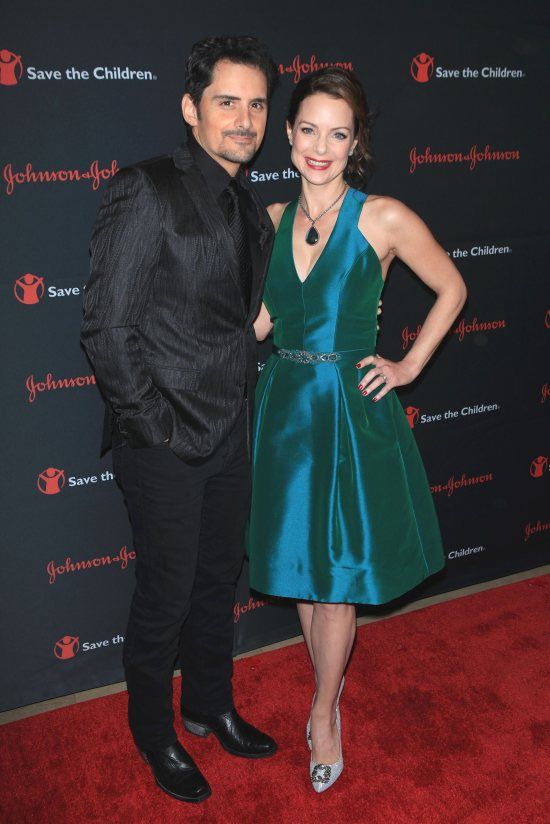 6. He Doesn’t Keep His Awards

Brad Paisley loves all of his trophies and awards — he’s super proud of his success, but we’re pretty sure he’s the only celebrity who doesn’t like displaying them in his home. Instead he pawns them off to his parents who are more than willing to take them. Paisley said he doesn’t like being reminded of the past, even if it is a good memory! “I don’t like reminders of the past all that much. Nor do I have time to dust or polish the statuettes, so my parents take care and display most of them at their house,” Paisley said in an interview with People. One thing he does keep though is a nice big collection of guitars! 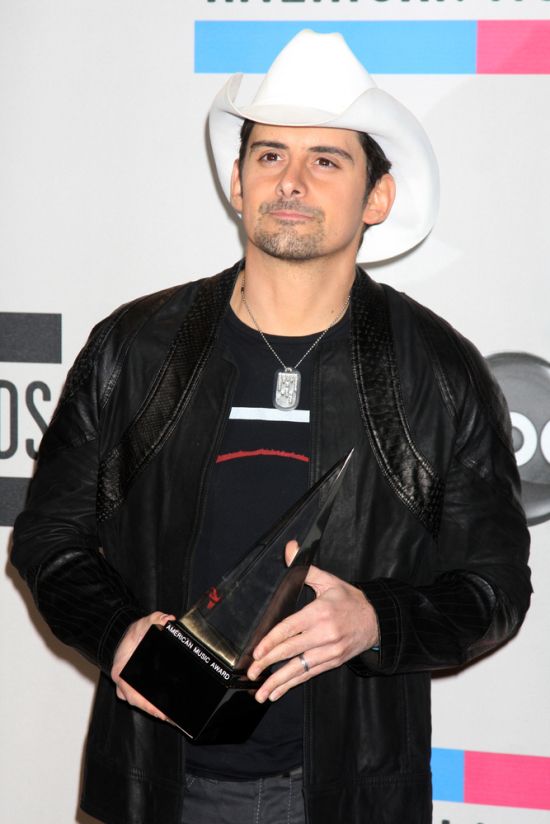 We’ve heard of celebrities doing extravagant things with their fortune and Paisley is no exception, although we’re pretty sure he’s not the only one who has done this. He had a built-in bar added to his home complete with and old bar top, a foot rail, a four-beer tap with refrigerated lines and even a cigar room with ventilation. He spared no expense for the “greatest sports bar in the country!” Even though he had this amazing custom bar built, he admits he doesn’t know how to work the taps. “I don’t think you can do Guinness right in America, but I’m going to try and see if I can get the right pour. I just think it will be fun to know, then I can go to work for Dierks Bentley at his bar in Phoenix!” said Paisley. He told People magazine that he wanted the bar because it brings back a lot of good memories for him. “I just love bar culture. I grew up playing bars as a teenager. We’d end at 2 a.m. and when I’d go back in the morning to pack everything up, it would be that stale smoke and beer thing — the evidence of a great time and that smell that you would associate with packing the gear. I wanted that in my studio. So we have it now. It’s neat to walk in there and smell the cigar smoke. It’s one of those things your wife would kill you for if you had in your home,” he said.

Brad Paisley’s dad is his biggest supporter and number one fan. Paisley told People magazine that his dad, Doug, comes on tour with him all the time and is often seen in the background of a lot of photos. “My dad [Doug] comes on tour with me all the time. There’s times when I’m like, ‘What are you doing? Why are you doing that?’ But having him out there keeps me pretty grounded,” he said. Paisley also mentioned that his dad is the one that people remember more so than him! “It’s interesting because he disappears from sight during the day, and my dad is a worker and he’s great with people, he gets to know all the backstage security in these venues. We’ll come through a town two years later, like the arena in Omaha or something, and there’s this lady sitting at the door in a yellow event staff jacket, and she’ll look at me and say, ‘Is your dad here?’ He’ll walk in and they remember each other and she’s like, ‘I brought you brownies this time!'”

It’s quite rare that a singer writes all of his number 1 hits or even all of the songs on their album, but Paisley can proudly say that he’s written or co-written 20 of his 23 number one hit singles. It might be because he’s been writing songs since he was 13 — his first song was called “Born on Christmas Day.” The first number 1 single that he wrote was his 1999 song, “He Didn’t Have To Be,” and the latest was the 2014 chart topping single, “Perfect Storm.” He also wrote some songs for the Pixar’s Cars franchise. When asked about where his inspiration comes from he said it’s basically from anything and everything: “Really, there’s an entire song based on something my little boy said. You wouldn’t know that, but that’s something. He’s made a statement about the whole song is because of something he said. Another song is because of something I saw happen, and there’s one that’s a fictional story of the craziest family we could think of in our minds, there’s another one I had a title for forever and didn’t know how to write it and I finally did. You know, it’s a cauldron. I write with several different people and it’s always a different experience. It’s like fishing, sometimes you catch one,” said Paisley.

When Paisley was just a kid he was playing all kinds of small, low-key gigs in his hometown, but his first memorable performance was opening for The Judds. The gig came at a time when he was playing with his band “Brad Paisley & The C-Notes” who had a regular gig on the Wheeling station WWVA. They were so well liked by listeners that they were invited to open up for artists like Little Jimmy Dickens and Roy Clark, but his biggest accomplishment was introducing The Judds. “My grandfather was super-proud. All of a sudden he was seeing this guitar he’d given me become my life.” Not long after his grandfather, who was one of his biggest supporters, was diagnosed with pancreatic cancer. “He basically had three or so months left. At about that time, I secured my first major headlining gig, opening for The Judds. He was in bad shape, but he got to come see me play. And I think he left this world knowing that he had started something good for me,” said Paisley.

It’s very rare that celebrities don’t use nannies or a nanny because they live such a busy lifestyle, but Brad and Kim made a point not to rely on outside help. Instead they called upon family and made sure to station their family close to Brad’s parents. “We have a couple of trusted friends and babysitters and two sets of grandparents. We don’t have anybody on payroll. That was a big deal for me. Luckily, we’ve made it work so far. I’m lucky that my parents are in such good shape, and they are only 60. The other night…I called my mom and said, ‘We’re thinking about going to see a movie. What are you guys doing later?’ And they said, ‘We were just going to get something to eat, and we’ll come by when we’re done.’ They came and put Huck down and fed Jasper, and then we went to that movie. It’s nice to do that and then come home and know that they are with their grandparents and they are having a better time than when we’re here…and probably learning more,” said Paisley. 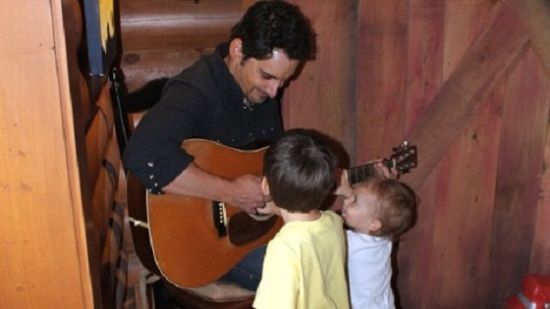 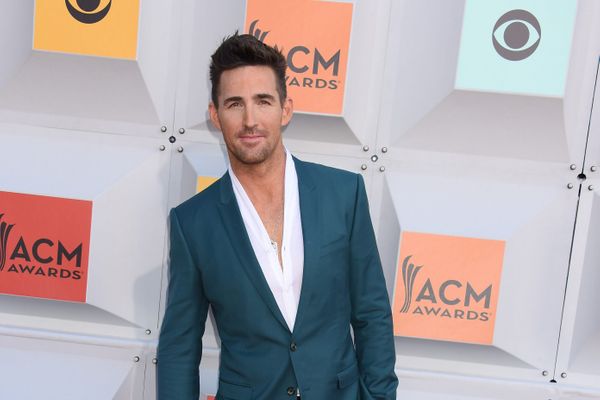