Bravo’s reality franchise known as the Real Housewives has been going strong since 2006 when they aired the first show in Orange County. Today, there are multiple shows featuring different cities across the U.S. — and even some internationally. What makes the show so great is the openness of the show. We are able to see their day-to-day lives which include their careers, family, friendships and relationships! When it comes to the long-standing cast members who’ve been around for more than one season, fans have been able to watch their relationships grow which is a nice change from all the break-ups and divorces. Real Housewives viewers have seen many marriages fall apart over the years, but these 9 couples persevered through the curse of reality television and are now deemed the best couples in the Real Housewives franchise!

Karen and Raymond Huger made their reality television debut in season 1 of The Real Housewives of Potomac. Karen definitely painted herself as the ringleader of the group as she had/formed relationships with each and every woman on the show. One of the things she prided herself on was family and the Huger family reputation. She introduced her husband, Raymond as “the black Bill Gates” and they seemed to have the perfect relationship. At times it definitely looked a little forced when she tried to play up their bedroom intimacy, but overall Raymond was extremely supportive of Karen throughout the entire season and definitely came across as a well-rounded husband who was incredibly focused on his family. Even when Karen got in a little tuft with fellow Housewife, Ashley Darby and her husband, Raymond came to her rescue and defended his wife’s honor. While Karen herself didn’t always leave a good impression on us, her marriage with Raymond did!

Stephanie Hollman joined the newest Real Housewives show The Real Housewives of Dallas earlier this year for season 1. By her side was her husband, Travis Hollman and their two children. Stephanie described herself as “the girl next door,” but one that lives in a big ‘ol mansion. Stephanie and Travis are extremely well off. Trvais is the president of Hollman Inc, a company his father started 40 years ago. It was pretty clear from their anniversary celebration that these two have quite a bit of money to throw around! These two are extremely supportive of one another and when something came up during the season that they disagreed on (like the to-do lists), Stephanie was able to communicate with Travis what she wanted and they worked through it! Stephanie even revealed in interviews after the show went to air that she and Travis went to counseling before and during the show to make sure their marriage stayed on the right track and that they were communicating properly. How sweet is that! These two definitely have one of the strongest relationships in the Real Housewives franchise and it’s totally cute watching them spoil each other.

This fiery Italian couple joined The Real Housewives of New Jersey back in season 3. At first Melissa was known as the in-law of veteran Housewife, Teresa Giudice, whose brother is Joe Gorga, Melissa’s husband. But now Melissa and Joe have been on the show for five seasons and they’ve made their own name for themselves. One of the best things about Melissa is her relationship with Joe who includes constantly cracking jokes and Joe making light-hearted comments about Melissa. It’s clear from the way Joe talks that he worships the ground she walks on! It’s totally adorable. Their marriage is definitely modeled after that old school Italian mindset, but Melissa is breaking down the barriers as she opens her own clothing boutique this season! Joe is extremely supportive of her, despite his complaints and it’s sweet how much these two back each other up, especially when their relationship with Teresa and Joe Giudice was bad. Their marriage is so great, Melissa even wrote a book called, “Love Italian Style: The Secrets of My Hot and Happy Marriage!” Their loveable banter and Joe’s constant displays of affection make these two one of the best couples in the Real Housewives franchise.

Power couple and restaurateur Lisa Vanderpump and Ken Todd have appeared on The Real Housewives of Beverly Hills since the first season back in 2010. They’ve dominated the show ever since and are most definitely one of the wealthiest couples in the entire franchise! Money really can buy happiness! Lisa and Ken aren’t exactly the sexiest couple, but they are definitely best friends who have each other’s back no matter what! No matter what squabble Lisa or even Ken gets into on the show, there’s no question they will back each other up. It’s clear from what we’ve seen on the show in the past few seasons, when Lisa is attacked, Ken will honorably defend his wife. He even goes to bat against the other women for her! They’ve been married for over 30 years and are still going strong which is definitely something to be celebrated. They have two children together, their eldest is Pandora, and they also have an adopted son named Max. Ken and Lisa run many businesses together, mainly their Beverly Hills restaurants and the spin-off series Vanderpump Rules. These two land as one of the best Real Housewives couples because they are so supportive of one another, extremely doting on each other (and Giggy) and because of their incredible long-standing marriage.

Cary Deuber joined The Real Housewives of Dallas for the first season this year. She appeared on the show with her cute husband, Mark Deuber, and their daughter, Zuri. Mark and Cary’s relationship came under fire during season 1 because of rumors spread by fellow Housewife, LeeAnne Locken. Locken told cameras that Cary had “stolen” Mark from his first marriage and accused Mark of committing adultery. Needless to say, these two slammed the rumors against them and came out on top over LeeAnne who ended up looking like a bully. Cary and Mark enjoy an extremely sweet relationship and it’s clear not only from them filming together, but from their social media pages and the way they talk about one another that they are best friends. In fact, Mark revealed after the show aired that he and Cary were friends for 15, 16 years before they got married. So they share a pretty close relationship! Mark is another one of those husbands who spoils his wife and enjoys doing little special things for her like buying expensive designer clothes, cooking dinner for her and is constantly dishing out compliments. All season viewers got to see these two share a lot of laughs with one another as they made plans to build up Mark’s practice where they both work and build a future together in Switzerland. A quick peak at their social media pages shows they love to travel together off the beaten path — which is the ultimate test for a relationship!

Heather and Terry Dubrow are most definitely fan favorites on The Real Housewives of Orange County, both together and separately. They’ve been married for 17 years and have four children together. It’s clear these two offer the perfect balance for one another as Terry’s goofy personality perfectly compliments Heather’s more serious tone. Although they often bicker about not spending enough family time together, it’s clear Terry works extremely hard to provide a lavish lifestyle for his family and Heather, whom he adores. He’s a great father (when he is around) and he’s always there when Heather needs it. Not only have they defied the odds against them for a married couple who star on more than one reality show, but they’ve also defied the odds in Orange County! Heather and Terry are the ultimate power couple as they’ve collaborated on many projects together including Botched‘s after show, writing a book and a beauty line. These two know how to sell their assets!

This Real Housewives of New York City couple isn’t married. In fact they are a rather unconventional couple and they’ve started a little bit of controversy on the show between LuAnn and Carole. Adam Kenworthy, who is now 30, is 23 years younger than Carole, 52. They met last season at a gathering hosted by LuAnn where Adam was the personal chef. Carole started a mild flirtation with Adam which lead to them dating. It’s safe to say no one thought this relationship would last, but Adam and Carole have defied the odds against them and he’s seen on the show quite frequently now. Their relationship is so great that these two have started working together professionally! Adam and Carole are working together on a potential cookbook with Carole as Adam’s muse for developing easy vegan recipes that anyone would enjoy (even the most bland eaters)! These two have landed as one of the best couples on the Real Housewives mainly because even though they aren’t married and haven’t been dating that long compared to some of the other relationships, they are much more stable and they are clearly head over heels for one another! They are very respectful of one another, allowing each one to go wherever their careers take them, which for Adam is to third world countries and for Carole it’s reality television. The most unexpected couple on the Real Housewives has easily become one of the best!

We all felt bad for Tamra in her first few seasons of The Real Housewives of Orange County because it was pretty clear she was unhappy in her marriage. She was pulling out all the stops to try and make things work, like tattooing Simon’s name on her finger! Things quickly turned around for Tamra in season 6 when she met her hot new boyfriend, Eddie Judge. She brought him onto the show fairly quickly and things moved full steam ahead when they got married on a Bravo television special in 2013. Not only do these two get along so well and share a great sense of humor, they are also extremely supportive of one another. Eddie seems to add that perfect balance that she could never find with Simon. Eddie keeps her grounded, but also accepts her for who she is and lets her be a free spirit. They seem to have mastered the impossible by mixing business with pleasure and starting up their own company together. They now share and run CUT Fitness. Eddie’s sweet attitude and fondness for Tamra makes him a fan favorite for viewers and this alone shoots them right up to the top of our list of the best Real Housewives couples.

Kyle Richards have been on the Real Housewives since season 1 of The Real Housewives of Beverly Hills. The child actor and current Housewife married the Los Angeles real estate agent in 1994. This was her second marriage and his first. Mauricio and Kyle now share three daughters together, and a daughter from her previous marriage. They’ve easily become one of the most well-liked couples in the Real Housewives franchise. Not only have they been married for an impressive 20 years, dodging the reality TV curse and high divorce rate in Beverly Hills, but they’ve endured rumors and gossip in the tabloids about their relationship. It seems nothing can bring these two down! Just a quick scroll through their social media pages will show how much these two love one another and just how adorably cute they are together. Mauricio and Kyle are extremely family oriented and seem to always be on the same page when it comes to their friendships, work and family time. To top it all off, Mauricio has been deemed the hottest husband on the Real Housewives! 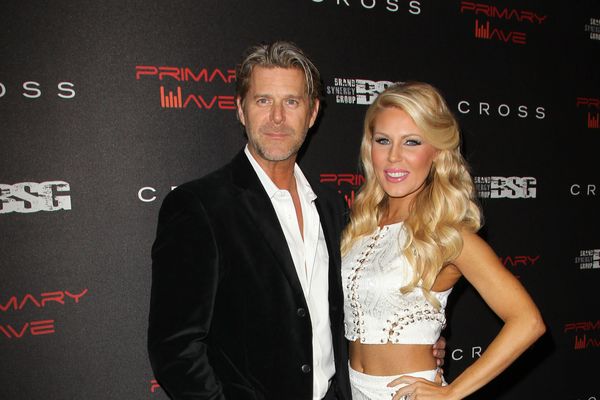