9 Celebrities Who Should Never Have Done Reality TV

Many would agree that reality TV shows are some of the trashiest shows on TV. We usually associate these programs with D list celebs who are trying (desperately) to make names for themselves in Hollywood or extend their fifteen minutes of fame. Much to our surprise, some pretty big celebrities have actually had their own shows. Many of them didn’t last, which begs the question why celebrities make the decision to do reality TV in the first place. We have a list of 9 stars who had their own shows. While some of you may remember some of these reality programs fondly, we think they were epic mistakes.

Some sources have indicated that Dina Eastwood’s decision to put her family on the reality TV show “Mrs. Eastwood and Company” is what ultimately ended her marriage to Clint Eastwood. The Oscar-winning director is notoriously private and was reportedly furious that she used his kids as props on her reality show. The show didn’t end up resonating with audiences and was canceled after one season. Dina and Clint’s marriage fell apart soon after.

“Hogan Knows Best” may have been popular when it first aired, but it ended up ruining the Hogan family. Hulk had an affair with one of his daughter Brooke’s friends; Nick got into a drunken car crash that left his passenger/friend permanently disabled; and Brooke’s music career never really ended up taking off despite being promised that it would. From all of this, we think it is safe to assume that Hogan never really knew what was best after all.

Chilli was the best thing to come out of TLC. She’s incredibly beautiful, talented and sassy – and, don’t forget, she locked down one of America’s hottest bachelors, Usher. Unfortunately, her decision to do a reality TV show about her quest to find love ended up being bad for her image. Chilli seems to have high standards and is ridiculously picky. Case in point: One of the requirements for any future boyfriend is that he can’t eat pork!

Even though Whitney Houston’s career was pretty much over when she agreed to appear in her husband’s reality TV show “Being Bobby Brown,” her decision to be part of this mess is a testament to how mentally unsound she must have been during that time period. Reviews of the show were mixed. Those that didn’t like it really didn’t like it. According to one critic, Barry Garron, “Being Bobby Brown” robbed Houston “of any last shreds of dignity.”

Nick Carter’s career was at an all time low when he and his siblings signed on to do the reality series, “House of Carters.” At that point, he was better known for his partying and the dysfunctional relationship he had with Paris Hilton. This reality TV show did nothing to rehabilitate his image. He and his four siblings – Aaron, Angel, Leslie (who died in 2012) and BJ – spent their time acting out for the cameras. There was way too much drinking and fighting for this show to be anything less than cringe-worthy to watch.

Lindsay Lohan’s self-titled docu-series was one of her worst career decisions, mainly because it exposed her as still being completely unprofessional. Even though she was allegedly using the reality show to market herself as more reliable, sober and career-oriented, it ended up doing the complete opposite. The troubled star sabotaged her own success by skipping photo shoots, refusing to film and faking a miscarriage in an effort to distract from her unprofessional behavior during filming for the show.

We understand that LeAnn Rimes and Eddie Cibrian are trying to use their self-titled reality show to rehabilitate their images. Unfortunately, it isn’t working. Instead of coming off as more likeable, they come as petty and immature. They spend too much time focusing on what the tabloids have said about them and (not to mention insulting Cibrian’s ex Brandi Glanville) to convince anyone that they’re anything more than a couple of narcissists who are only doing the show because they need a good paycheck.

Long before Lindsay Lohan got her own docu-series on the Oprah Winfrey Network, Dina Lohan had her own reality TV series that primarily featured her youngest daughter Ali and her attempt to follow in her older sister’s footsteps and break into show business. The show was a hot mess (just like Dina) and critics savaged it. Troy Patterson of Slate magazine, said “Living Lohan” is “not just a symptom of cultural decay but an active agent of it” and “one big exploitative mess.”

Britney Spears recently said that one of her biggest career slip ups was when she took part in “Britney & Kevin: Chaotic,” a reality show that chronicled the start of her relationship with ex husband Kevin Federline. We couldn’t agree more. The reality series was a total train wreck. Some called it career suicide while Flak Magazine called it an “insult to common sense and decency.” Thankfully we live in an amnesiac culture, so most people have already forgotten it ever happened. 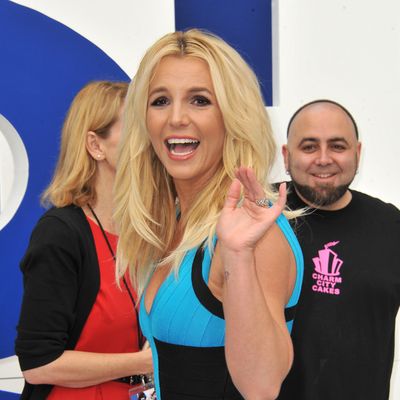