In the 50 plus years that General Hospital (GH) has been on the air, fans have seen some pretty interesting couples come and go. Some have seemed perfectly made for each other, while others have been a little mismatched. They say opposites attract, but sometimes they don’t! It really depends on the “chemistry” between characters and actors alike. Here’s a list of the show’s mismatched couples:

It’s still hard to picture Sam and Patrick together to this day. The couple dated from 2014 to about 2015, and even got engaged. While on paper, they seemed like the perfect super couple because they were such opposites (this works in soaps), but in reality, they lacked chemistry. Makes it no surprise that when “Jason” (at the time) returned, the two broke up with Patrick reuniting with Robin. 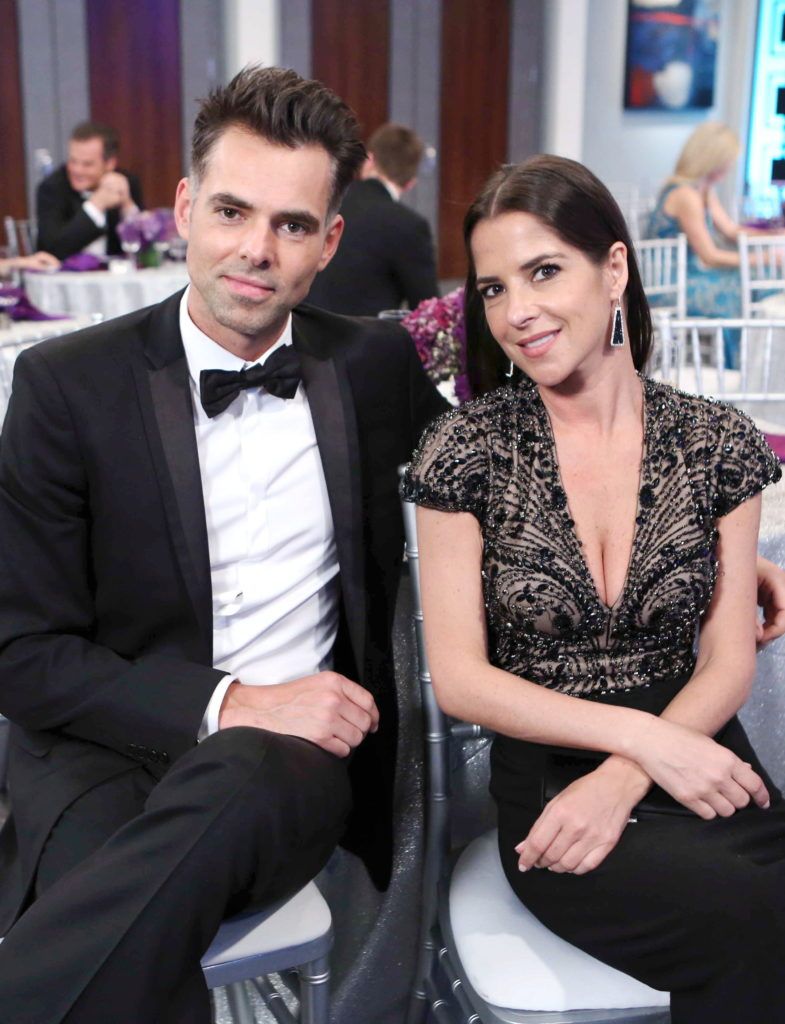 Anna has always been on the right side of the law, whether she’s been a WSB agent, police officer, or commissioner. Meanwhile, Duke always sat on the other side of the tracks, working for mobsters and dodging bullets. This GH super couple had an incredible history, and the two did share an unbelievable romance. Sadly, Duke passing away has torn them apart – perhaps, someone can find a way to rewrite him back into storylines. 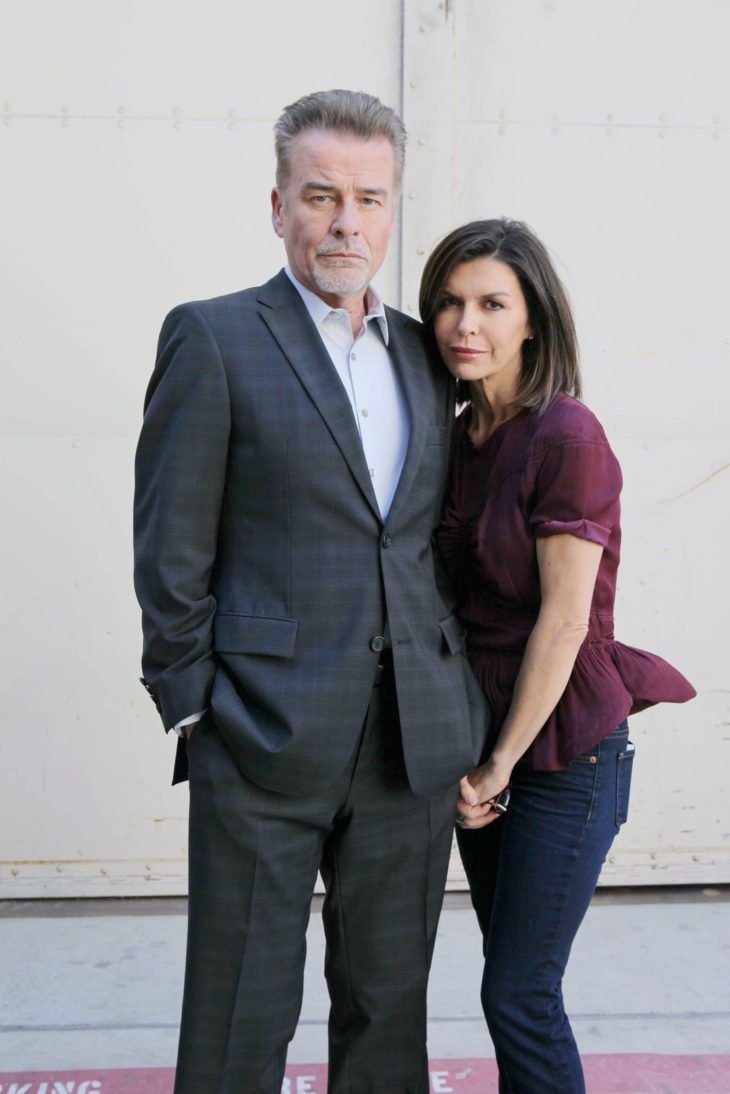 The ultimate super couple – the super couple that started it all – were also two mismatched individuals (made in heaven). They haven’t been together or a “thing” in years, but the magic and chemistry they had lit up daytime television screens everywhere. No two people could be further opposites, which made their love story work on so many different levels! 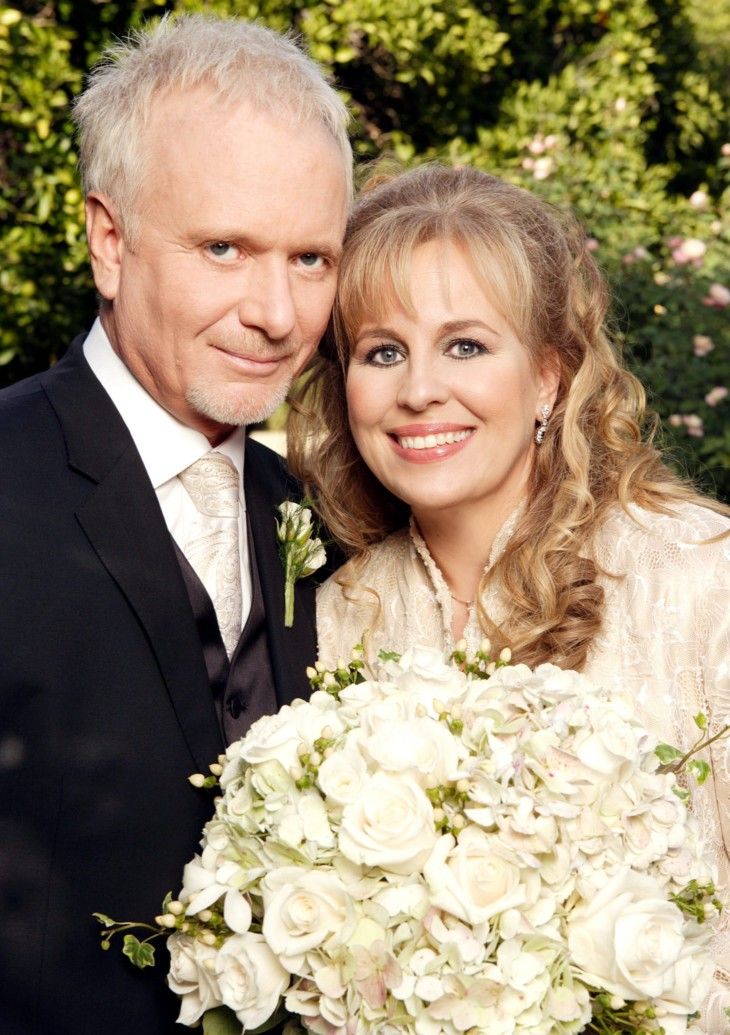 Port Charles’ resident mobster Sonny always had a thing for smart and beautiful women with a kind heart. There was his attraction to Alexis, his relationship with Kate Howard, and a little fling he had with Emily Quartermaine in and around 2006. While the idea behind having Emily and Sonny hook up may have been intriguing on paper, as she was a Quartermaine and his BFF’s sister, the truth is, this couple was mismatched and lacked chemistry.

Speaking of mobsters, a couple that no one saw coming was the holy union of Tracy Quartermaine and Anthony Zacchara, but were these two considered a couple? Tracy has never been an angel by any stretch of the imagination; however, a Port Charles socialite she was, and when she married Zacchara the entire town was taken aback. The marriage was never consummated, and it ended when Anthony passed away, but while he was alive, he sure was smitten with the eldest Quartermaine daughter. 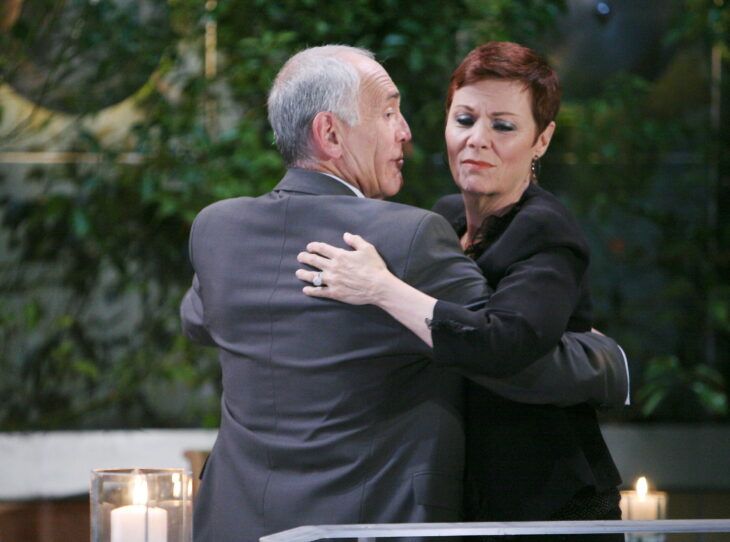 Scotty Baldwin has flopped back and forth from “zero” to “hero” over the years in Port Charles, but before he met Dominque, he was an all-around slimeball. In the early 1990s rich, sophisticated, and kind-hearted Stanton strolled into town – the complete opposite of Baldwin – and won over his heart. She was also able to turn him around, as Scotty forgot his scheming ways and focused on his love with her. Interestingly enough, she was able to do the same for his friend Lucy Coe. This couple was mismatched, but they were also a joy to watch on the daytime drama.

These two made quite the couple back in the day, and in many ways, the “opposites attract” rule for love on soap operas worked well for them. Damien Spinelli was charming, with his incredible vocabulary, tech-savvy, and overall nerd-isms. It made for a unique pairing when matched up with the self-absorbed, fashionista Maxie. They are the epitome of a mismatched couple, which makes it no surprise that Damien chose Ellie (a female version of himself) to settle down with when all was said and done. 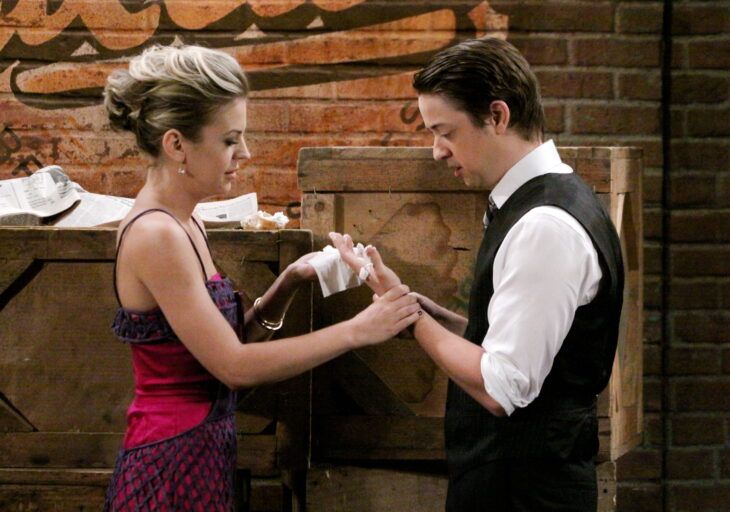 In the late ‘80s, a seductress strolled into Port Charles by the name of Lucy Coe. Lucy was a gold-digger looking to score an easy life and when her eyes fell upon the good doctor, Tony Jones, she knew she hit the jackpot. Thus, she pulled out all the stops to try and lure him in. He fell for Lucy’s act, despite her manipulation and scheming, the two ended up getting married. Alas, their mismatched personalities would soon collide, and it didn’t take long for the two to go their separate ways.

Tony has always been a sucker for manipulative women (see his above relationship with Lucy). Almost a decade after his failed relationship with one schemer, he found another who fell at his feet: Carly Benson. Once again, the kind and good doctor was manipulated into a relationship. Carly really only wanted to get back at her mother, Bobbie, for putting her up for adoption when she was a baby, so she stole her husband, Tony.

Good girl and a dangerous mobster seem to be a trend in Port Charles when it comes to couples. Robin Scorpio was more than just a “good girl” — she also happened to be the daughter of two former police officers/commissioners/super spies! She was also the niece of police commissioner at the time, Mac Scorpio. Needless to say, as her caretaker for the moment, Mac was not thrilled that Robin was hanging out with Jason. While these two were mismatched, they did make a wonderful young couple at the time. 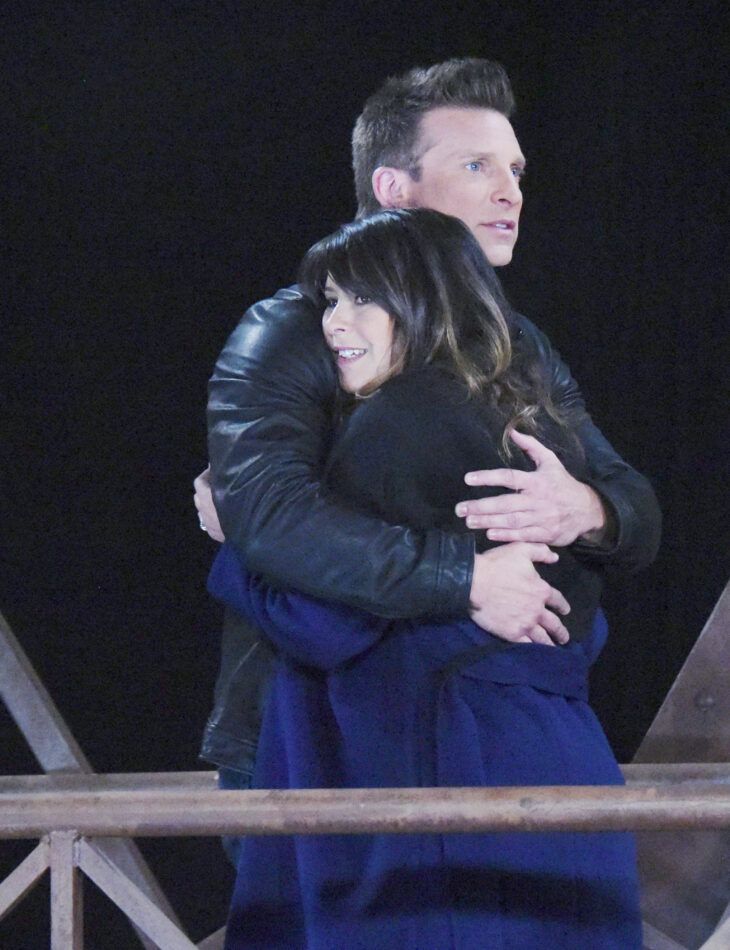 Fans know all too well that Alexis has a thing for mobsters, and Julian fits that bill to a ‘T.’ While the couple had plenty of fans, they also had a ton of mismatched qualities. Julian is a criminal who partakes in plenty of illegal activities (not to mention scamming his own family), whereas Alexis is/was a lawyer who has tried, for the most part, to live life on the straight and narrow. 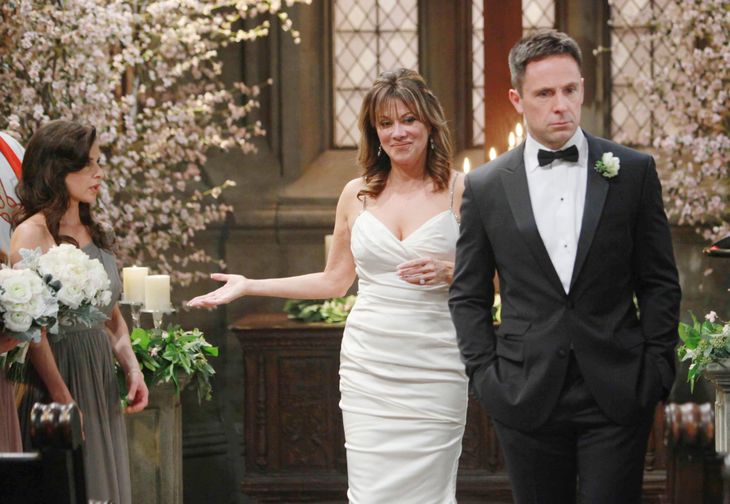 Back in the 1990s, Lucy Coe was a gold-digging manipulator and town outcast, while Alan Quartermaine was a respectable member of the town and a doctor at the hospital. Lucy squirmed her way into Alan’s heart, broke up his marriage to Monica, and the two had got married … but it didn’t last very long. Regardless, one look at their wedding photo, and it is not hard to see just how mismatched this couple was back in the day. 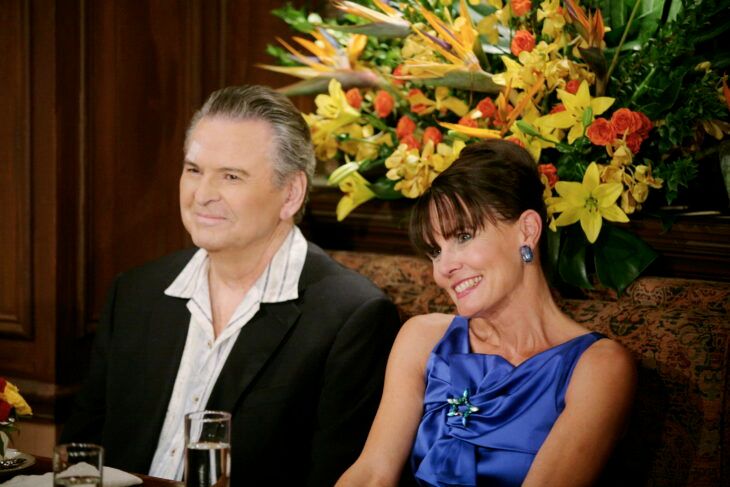 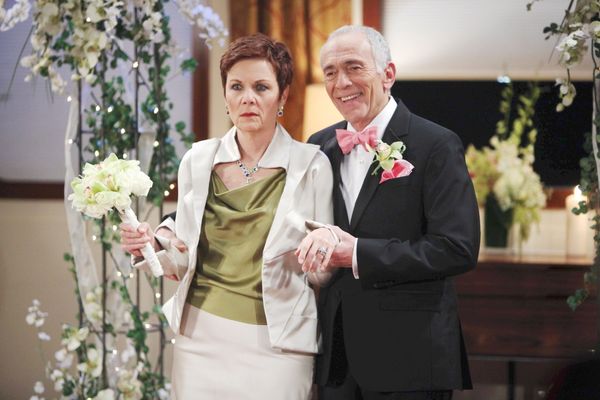