9 Reality Stars Who Have Gone To Jail

Sometimes celebrities aren’t the best role models. They make some pretty big mistakes and because of how famous they are everyone sees the fallout. It turns out that not all celebrities are above the law. When they mess up, they may be able to afford some really good lawyers but, if they are guilty, they usually get punished. Sometimes the judge wants to make an example of them. This week Teresa Giudice went to prison for some pretty serious crimes and it got us thinking about all of the other reality TV stars who have broken the law and were sent to jail. Here are 9 of them!

Lindsay Lohan has had so many brushes with the law. In 2007, she was busted for driving under the influence twice. Both times, police found cocaine on her person. She pleaded guilty to misdemeanor cocaine use and driving under the influence that summer and was sentenced to an alcohol education program, community service, one day in jail, and was given three years probation; however, she only ended up spending 84 minutes in jail.

Unfortunately, the reality star’s legal troubles didn’t end there. In May of 2010, she found herself back in jail when a judge determined that she had broken the terms of her probation after she missed several of her alcohol education classes. Although she was sentenced to 90 days in jail, she only served 14. In September of that same year, she found herself in jail again when her probation was revoked after she failed a drug test. 2011 wasn’t much better for Lohan. She was charged with theft for stealing a necklace and was sentenced to 120 days in jail. She ended up serving the sentence under house arrest. She had to serve more jail time that year when she failed to perform her community service. Hopefully this is the end of her legal troubles!

The “Real Housewives of New Jersey” star just began her 15-month sentence for fraud the other day at a federal prison in Danbury, Connecticut. The whole situation has been quite messy and has played out in the media. This past July, Teresa Giuidice and her husband Joe were indicted on 39 counts including conspiracy to commit mail and wire fraud, bank fraud, making false statements on loan applications and bankruptcy fraud. Prosecutors accused them of filing fraudulent paperwork to obtain $5 million in mortgages and construction loans and of hiding their assets during their 2009 bankruptcy petition.

Once Teresa has completed her sentence, Joe will begin his 41-month sentence for the fraud charges. Since he is not a U.S. citizen, he might face deportation once his sentence has been completed. Rumor has it that he is planning on serving his wife with divorce papers when she’s in prison. In the past, he has been accused of sleeping with his children’s nanny, so serving her with papers in prison doesn’t seem like such a stretch.

Apollo Nida – who made a name for himself on “Real Housewives of Atlanta” – is currently in a federal prison serving an 8-year sentence for a fraud conviction. According to federal prosecutors, he reportedly stole millions of dollars from at least 50 people over four years. The former reality star had created fake collection companies to gather personal information and then used that information to steal the victims’ identities. According to the criminal complaint, he used the information to get fraudulent loans using his victims’ names.

Along with the fraudulent auto loans, Nida also stole Treasury checks, as well as “retirement checks issued to Delta Airlines employees, and checks in the names of real people that were owed unclaimed property from various state and federal government agencies.” Nida’s wife, Phaedra Parks, claims to have had no clue that her husband had been engaging in illegal activities and she plans to divorce him.

In 2008, Khloe Kardashian was sentenced to 30 days in jail after she violated probation following her 2007 DUI arrest. She was supposed to complete roadside cleanup and enroll in an alcohol education class, but she failed to do so. When she went to serve her time, she was out in three hours. The jails were full of more serious offenders, so they couldn’t find room for her. This was all featured in an episode of the family’s reality TV show, “Keeping Up with the Kardashians.”

Khloe isn’t the only person in her family who has had a DUI. Her sister Kourtney’s baby daddy, Scott Disick, had one too. Back in 2001, he was arrested for driving while intoxicated after he crashed his car in Riverhead, New York. We hope these two have learned their lessons. Driving while under the influence might not be considered a violent crime, but it is most certainly quite dangerous.

This former “America’s Next Top Model” finalist was sentenced to 12 years in prison this past December after she pled guilty to four felony burglary counts, one count each of vehicle theft and being a felon in possession of a firearm and to a misdemeanor count of identity theft for various crimes that took place in Palm Springs in June 2013. She was also dismissed of a dozen other counts thanks to a plea agreement. Some of these included resisting an officer, possession of a controlled substance and receiving stolen property.

Alway was arrested in July 2013 on multiple charges, including suspicion of burglary and fraud. Police found her hiding in the garage of a vacant home. The owners were out of the country at the time. This wasn’t her first brush with the law. The previous April, she was arrested for grand theft auto over $400, as well as for grand theft with a firearm and receiving stolen property. In June of 2013, she was charged with possession of drug paraphernalia, petty theft and fraud.

This “Teen Mom” star is quite the bad girl! In 2011, she was arrested for drug possession and probation violation. She struck a plea deal, which enabled her to avoid a five-year jail sentence and seek treatment at a rehab facility. Before the drug arrest, she was in the middle of serving two-years probation for domestic battery. She had assaulted Gary Shirley, the father of her child.

It turns out that rehab just didn’t agree with Amber Portwood. In 2012, while she was supposed to be completing a drug rehab program, she told a judge that she was unable to finsish it. She reportedly said that she would always be a “bad girl” and asked to be sent to prison instead. She got her wish! While rehab may have done nothing for her, prison did. She was released in 2013 after only serving 17 months because of her good behavior. Maybe this bad girl really has changed!

Paris Hilton served a brief prison sentence in 2007. A year earlier, she had been charged with two misdemeanors, one for driving under the influence and the other for driving with a blood alcohol level of 8.0 or higher. A lawyer at the time had said that they didn’t expect her to serve any jail time. She was expected, at the very most, to get a fine, probation and be forced to attend DUI school. It turns out that the situation was a bit more serious than that. Her license was suspended by the DMV when she got her DUI and she had continued to drive anyway.

When a police officer caught her driving without her headlights and with her suspended license, it was all over. She was sentenced to 45 days in jail. Although she was released early because of an undisclosed medical condition, she was quickly sent back to finish the remainder of her sentence behind bars.

Who knew that Lauren Conrad’s ex Jason Wahler was such a bad boy! We knew that he was a womanizer from his time on “Laguna Beach” and “The Hills,” but we didn’t know that he had so much trouble with the law. In 2007, he was sentenced to 60 days in jail for punching a city worker and tow truck driver. He found himself in jail again in 2009 when he was arrested for assault and underage drinking. A court official said at the time that the former reality star would “serve 120 days in jail but could get out after 80 days for good behavior.”

Wahler kept going with his bad boy ways. In 2010, he was in jail again. He was arrested in Mexico after getting into a bar fight. According to him, he had problems with addiction, which kept landing him in trouble. He claims that he was finally able to kick his bad habits after he appeared on Dr. Drew’s “Celebrity Rehab.” We hope that’s true!

Nicole Richie was sentenced to four days in jail back in 2007 when she pleaded guilty to driving under the influence. In December of 2006, she was spotted driving the wrong way on a Los Angeles freeway. Police were called. The reality star failed a sobriety test and admitted to police at the scene that she had smoked some marijuana and took the painkiller Vicodin earlier that evening. She initially pleaded not guilty, but then switched her plea to guilty.

The former “Simple Life” star ended up spending only 82 minutes in jail because of overcrowding. She was five months pregnant at the time with her first child, Harlow. This wasn’t Richie’s first brush with the law. Back in 2003, before she became a household name, she was busted on suspicion of possessing a controlled substance and for driving with a revoked license. She pleaded guilty to all charges and was sentenced to probation. 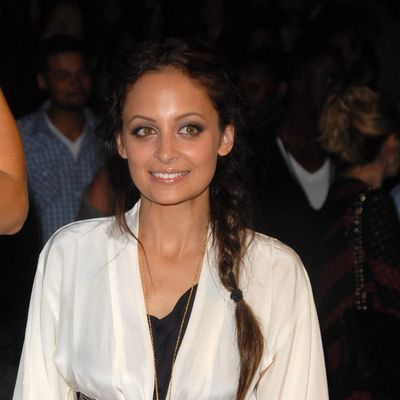