Country singer Kellie Pickler and her husband, songwriter Kyle Jacobs, are no doubt one of the cutest couples in Nashville! Even though these two typically keep a low profile out of the spotlight, they also star in their own reality show called I Love Kellie Pickler on CMT. Because they are such a great couple, here’s a look at 9 things you probably didn’t know about Kellie Pickler and Kyle Jacobs relationship!

Kellie Pickler met Kyle Jacobs back in 2007 at a bar through their mutual friends, Chris and Amy, who are fellow Nashville songwriters. “What had happened was, I was out with a friend of ours. We had mutual friends, Chris and Amy, great songwriters in Nashville. I look across the room and I see this guy, Kyle; I didn’t know who he was or what he did, and we just locked eyes and I went, ‘I gotta know everything about this person,'” said Pickler in an interview with Taste of Country. “So we ended up sitting with him and his buddies, and we got lost in conversation and everybody else disappeared. We started writing songs the next day.

Kellie isn’t afraid to admit she’s not the world’s greatest cook. “I’m just lucky if I don’t burn the house down. I’m trying to work on the cooking thing, so it’s a big deal if I get into the kitchen,” she said in an interview with People. Once she masters it, her first goal is to get her husband to eat Southern food. “I haven’t gotten him hooked on fried okra. He hates that, but that’s my favorite food. We gotta figure out how to get him to like it,” she said. “Kyle’s from Minnesota, so he didn’t grow up eating Southern food. My grandparents had a huge part in raising me. My grandmother deep-fried everything.”

Jacobs proposed to Pickler on the date of her late grandmother’s birthday, June 15, 2010. Jacobs specifically chose this day because it had previously been a day of sadness for her, so he wanted to change it into something happy. He popped the question on a Florida beach after the couple had been dating for about two and a half years. He had a blanket with champagne and candles waiting as they walked down the beach. “It was the most spiritual moment. We would’ve gotten married that night had there been a preacher walking by!” she joked in an interview with People.

Not long after they got engaged, Pickler and Jacobs started the wedding planning process and got pretty far into it until they realized they just wanted to elope! In an appearance on The Ellen DeGeneres Show afterwards, Pickler said: “We were almost finished with the wedding planning — we’d already done the cake and the flowers and all that — and every time we got to the guest list, I was like, ‘Oh my God, I hate half these people,'” she joked. So they flew to the Caribbean and eloped on January 1, 2011, in a small and intimate ceremony on a private island. “It was perfect because we didn’t plan anything. All we did is I packed the wedding dress, we packed him an outfit and we flew there. We totally just put faith in God that it was all going to work out and it did. And it was the most incredible day of my life.”

5. Co-Wrote a Song Together

Pickler and Jacobs share a love of music and songwriting, so they’ve worked together on writing songs many times before, but when he co-wrote one of her singles “Feeling Tonight,” it became their first time collaborating in the studio together. In an interview with People, Pickler gushed about her husband’s songwriting skills. “He is so good at what he does. Working with Kyle has been amazing. He has watched me perform for years, so it was great to have a front row seat as an artist and see him in his element.” She admits this song is special to her because it reminds her of him. “I think of Kyle when I sing this song and the love we share. We’ve been married four years and together more than seven, but we’re still like newlyweds.”

4. One Thing He Does That Drives Her Crazy…

In a recent appearance on The Ellen DeGeneres Show, Pickler shared a hilarious story about her husband, Kyle Jacobs. The “Red High Heels” singer revealed the one thing her husband does that drives her crazy — he snores! “You know what, he’s a lot better sleeper than I am, and he snores. I have insomnia, and I’m up all hours of the night, and I get jealous that he’s asleep and he’s snoring.” She even admitted to threatening to stick a tampon up his nose if he didn’t stop!

Once the Nashville couple tied the knot, people started asking when they’d start a family, but according to Pickler in an interview with CMT Radio’s Cody Alan back in 2011, they’re in no rush! “I don’t think people realize…the responsibility that comes along with it. It’s almost like a fad. I don’t know what’s gotten into these kids where they feel like they have got to have a baby because their friend has one or whatever. They don’t take into consideration that it’s a very selfish thing to do if you’re not prepared and ready,” she said. “I take that very seriously, and when Kyle and I are ready, then we will maybe cross that bridge if it ever gets here. Maybe life gives us a surprise, but we’re married and we have stability in our lives, so if that does happen, we are prepared.”

2. Make Each Other Laugh

In an interview with The Knot, Pickler gushed about her husband and how much fun they have together. “Kyle is a sanctuary for me. He is my best friend, so I trust him completely…I’m so blessed to be able to experience this life with my best friend. My life partner. He’s my adventure-travel buddy and just my treasure. I’m so blessed to have somebody to share this life with,” she said. “He makes me laugh! We laugh so much. He makes me feel so good about myself. He is just so wonderful. And there’s no doubt in my mind — when someone makes you feel special — you love them that much in return. It’s such a wonderful comfort and feeling.”

While Kyle supports his wife, Kellie, in whatever she wants or needs, there is one thing he’s had to put his foot down on — pets! Kellie loves to rescue animals, and not just cats and dogs, but all kinds of animals! She’s taken in a pet python named boots, a monkey named Bella, and chickens! “My husband will not let me have any more animals than we do now. He never knows when the bus rolls up at home, I open the bus door, and he’s wondering what critter’s going to crawl off of there now,” she said in an interview with Taste of Country. 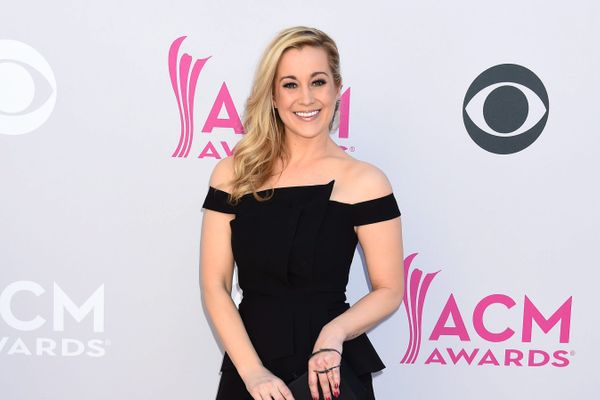