Hannah Ann Sluss is definitely one of the women to watch on Peter Weber’s season of The Bachelor! Although she’s been involved in some controversies, people seem genuinely curious about her and want to know how far she makes it in the competition. We’ve rounded up 9 things you didn’t know about Sluss, as well as how far she makes it on the show (spoiler alert for those who don’t want to know):

Hannah Ann has a very famous friend in the Bachelor world – Hannah Godwin! She was on Colton Underwood’s season of The Bachelor. The two have modeled together on a variety of occasions. One of these occasions was for the Atlanta hot dog chain The Varsity, Shop Redress and American Style. In the “Meet the Women” YouTube livestream, Chris Harrison revealed that it was Hannah G who referred Hannah Ann to producers.

Sluss is a fairly successful model and has been in the business for years. She’s been represented by Campbell and Model Club, but she’s currently signed with The Block Agency. Some of her biggest modeling gigs have been for Downey, Spanx, Revolve, JVN by Jovani, Vanity Fair Lingerie, and the fast-food joint Sonic.

7. She Was in Beauty Pageants

Like other contestants before her, Hannah Ann has also dabbled in beauty pageants. She competed in the Miss Tennessee pageant more than once and was the first runner-up in the competition in 2015 and 2018. Then she earned the title of the second runner up in 2014 and came in fourth place in 2017.

My Custom Sherri Hill gown is too pretty to be sitting in my closet. Contact me if interested ❤️❤️ #OneofAkind #SherriHill #forsale #firstrunnerup

6. She Still Lives at Home

The Bachelor contestant has something big in common with Peter – they both live at home with their parents. In her ABC bio, it says, “Her parents are not only her role models, they are also her landlords, as she still lives at home.”

Bae isn’t in the mood… but it’s Christmas time 🐶🎄🎁

5. She Was in a Music Video

Back in 2018, Hannah Ann was featured in Chris Lane’s music video for his single “I Don’t Know About You.” She played his love interest in the video, but she doesn’t seem especially interested in him. The two of them spend most of the video running from a cop – who turns out to be her dad.

4. She Was in a Long-Term Relationship

Before The Bachelor, Sluss was in a long-term relationship with a guy named Ben. Back in 2017, she posted a picture of the two of them celebrating their fourth Christmas together, and in her ABC Bio, she describes their relationship as “all chemistry but little friendship.”

Sunset dinner on the beach for NYE 💛

In his pre-season cast assessment, Chris Harrison said Hannah Ann is “naïve and innocent” but that she ends up in the middle of all the drama. “She seemed very naive about this whole Bachelor world. For someone who is so naive and innocent, she ended up in the middle of absolutely everything. Every bit of drama you could run into, there was Hannah Ann. But let me just say this about her. Seems sweet, quiet, reserved? Girl’s got a backbone. Girl’s got a backbone,” he said.

2. Does Peter End Up with Hannah?

The big question on fans’ minds right now is – does Peter end up with Hannah? According to Reality Steve, Hannah is one of Peter’s final 2. The other contestant is Madison Prewett. Reality Steve is also certain that Peter does not get engaged to either woman during the final rose ceremony.

Just when I thought life couldn’t get any sweeter… 🍰🍓💋💋

1. Her Dad Gives Peter His Permission

While Madison Prewett’s father does not give Peter permission to propose to his daughter, Hannah Ann’s father does give Peter his blessing. During her introduction on The Bachelor, she says that her dad is a fan of the pilot and thinks he’s a good guy.

Every year makes me appreciate my father more ❤ I feel so blessed 💐 Thank you @ediblearrangements for sending me this delicious arrangement to surprise my dad ! #ad 💚#happyfathersday 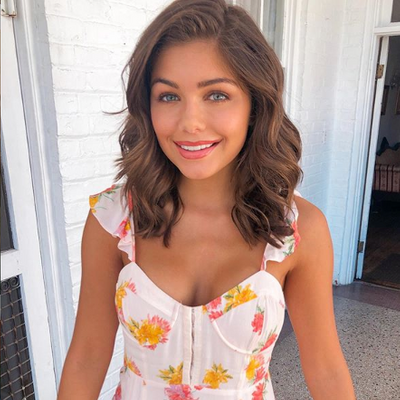