During those summer months, we don’t know where we would be without Bachelor in Paradise. It features previous contestants from The Bachelor and The Bachelorette competing for a second shot (or a third shot) at love in Mexico. Everyone’s beautiful and there’s tons of alcohol on hand which, as all we know, leads to drama and, in some cases, scandals. We’re counting down some of Bachelor in Paradise’s most scandalous moments so far – check it out!

In 2016, production was suspended for season four of Bachelor in Paradise after a producer raised concerns about an alleged sexual encounter between two contestants, DeMario Jackson and Corinne Olympios. According to the producer, both contestants had been drinking heavily when they hooked up in the pool and she was worried that Corinne was been too drunk to consent to any sexual activity. An investigation ensued, but it was determined that there was no evidence of misconduct, so filming resumed.

Michelle Kujawa – from Jake Pavelka’s season of The Bachelor – made the first episode of Bachelor in Paradise one that viewers will never forget when she eliminated herself from the show and was then caught having an illicit affair with one of the show’s crew members. Making matters worse, when Chris Harrison and a producer knocked on Michelle’s door after she eliminated herself, the crew member literally jumped out of her window to avoid being caught and ended up breaking both his feet, thus making their affair totally unforgettable.

Marcus Grodd and Lacy Faddoul tied the knot during an episode of Bachelor in Paradise, but it wasn’t even legal! When they returned from filming, they were supposed to get the paperwork done to make it legally binding but, according to him, she stalled and then totally checked out of the relationship. He claims that her priorities changed and she was no longer interested in living together and didn’t want kids anymore.

Joshua Albers – from Kaitlyn Bristowe’s season of The Bachelorette – shocked everyone in Bachelor in Paradise when he started bragging about partying and talked about taking the drug Molly and waking up in Las Vegas with no cash and no memories of what happened. He also told a story about a club in L.A. that sells coconuts filled with Molly for $30. After the episode aired, Joshua called out the producers for portraying him as a party animal and a drug addict. According to him, the story he told about the drug-filled coconuts wasn’t about an experience of his! He was just relaying a story a crew member told him.

4. AshLee Frazier Backstabs and Gets Dumped – Season One

AshLee Frazier was like one person in front of the camera and another when she thought the cameras were off. She was caught on more than one occasion bad mouthing Claire Crawley when she thought the cameras weren’t rolling. Unfortunately for her, this was a deal breaker for her boyfriend on Bachelor in Paradise, Graham Bunn. After getting a push from his pal Michelle Money, he sent AshLee packing and perhaps, most surprisingly of all, she didn’t cause a scene!

Chad Johnson had already earned himself a reputation as a villain on JoJo’s season of The Bachelorette, so when he waltzed onto Bachelor in Paradise and starting causing problems, no one was too shocked, but we had yet to see the worst of it. He hit on all new low in Mexico when he called Sarah Herron a “one-armed b-tch” after she called him out for being a misogynist. He later apologized via Twitter, but she wasn’t having it.

Joe Bailey – from Kaitlyn Bristowe’s season of The Bachelorette – earned himself a reputation as a villain when he used single mom Juelia Kinney to get a rose and then ditched her as soon as Samantha Steffen arrived. It turned out that Joe and Samantha had been communicating before the start of the show via social media, texting and phone calls and Joe had the texts to prove it. All of this was confirmed when the camera crew caught the two of them having a conversation where she told him to tell the producers that they hardly talked prior to meeting in person on the show. Joe, however, later admitted that he and Samantha were scheming for weeks prior to going on the show so that they could hook up in Mexico.

1. Chad Gets the Boot – Season Three

Chad Johnson was only in Mexico for one night when Chris Harrison made the executive decision to kick him off the show. To be fair, it was a pretty eventful one night. He got drunk, threatened violence, said horrible things to the other contestants and reportedly soiled himself. “I guess the ultimate decision to send him home was…I wasn’t really scared for anybody, I don’t think he was going to hurt anybody, although he threatens violence and says horrible things,” Harrison said. “He was taking away from everybody’s chances to actually make this work. He was just a black cloud hanging over everything. He had really been verbally abusive to some of the staff, some of our crew and was rude to me.” Unfortunately, Chad didn’t take getting kicked out to well and he proceeded to insult Chris on his way out. No one was sad to see him go. 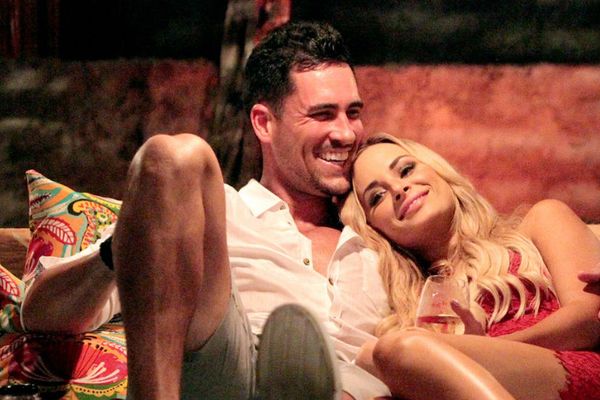 Bachelor In Paradise Spoilers 2016: Which 3 Couples Get Engaged?