In terms of reality television, The Bachelor opened up a whole new frenzy when it first aired on March 25, 2002. Since then there has been just as much success with The Bachelorette and Bachelor in Paradise and, although the point is to find love, only a few have found real romantic connections on the show. Out of many seasons of The Bachelor so far there have only been 15 proposals and of those only two of the couples are still together, but those statistics haven’t hindered the ring providers as the engagement rings given in the final rose ceremony seem to have only gotten more expensive and a whole lot bigger. Here are some of the most expensive engagement rings handed out on The Bachelor:

In the fall of 2002, The Bachelor was still new as it headed into its second season with Aaron Buerge as the leading man. In the end his season came down to Helene Eksterowicz and Brooke Smith and eventually Buerge proposed to Helene with a 2.75 carat Harry Winston Oval diamond worth a cool $29,000. Unlike some of the others, Buerge purchased the ring on his own, but unfortunately they broke up after only a few weeks and sold the ring on eBay for $28,300. 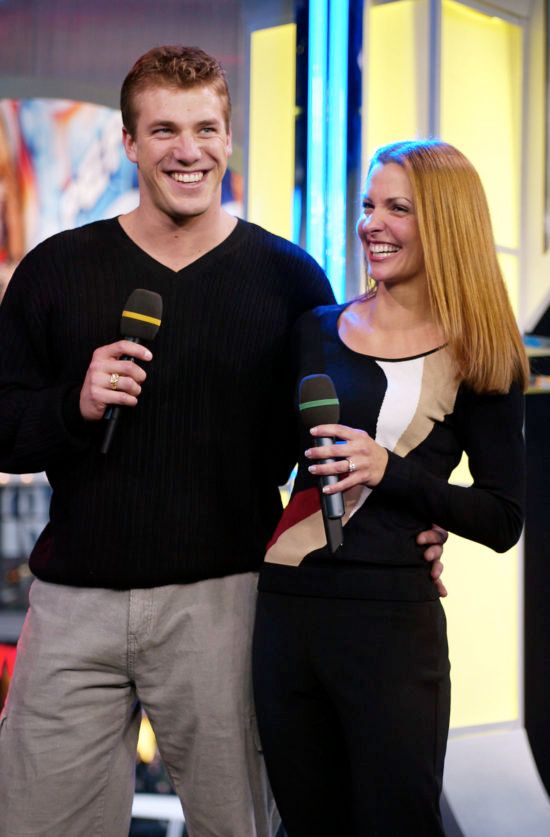 Season 10 of The Bachelor showcased Naval officer Andrew Baldwin’s search for love which resulted with his engagement to Tessa Horst. While the ring appeared very simple there was a lot more to the elegant Chopard ring than met the eye. The diamond was actually conflict-free and was obtained through the most ethical process possible and ended up costing an impressive $50,000. Unfortunately it wasn’t enough to keep the two together and they ended their engagement one month after the finale in May 2007, but continued their relationship until fully calling it quits in September of that year.

Back in 2010 Bachelor fans watched as Jake Pavelka went on his search for love which ended with a very shocking proposal to Vienna Girardi. While fans often refer to Jake’s season as one of the most boring ever, the finale certainly was not and everyone took notice of the stunning 2.72 carat Neil Lane princess-cut diamond ring he presented to Vienna. The gorgeous ring featured a 2.02 carat center stone surrounded by 70 more diamonds and cost a cool $50,000. Like most others, it was provided by the show, so when the pair called it quits less than three months later, they had to return the ring. 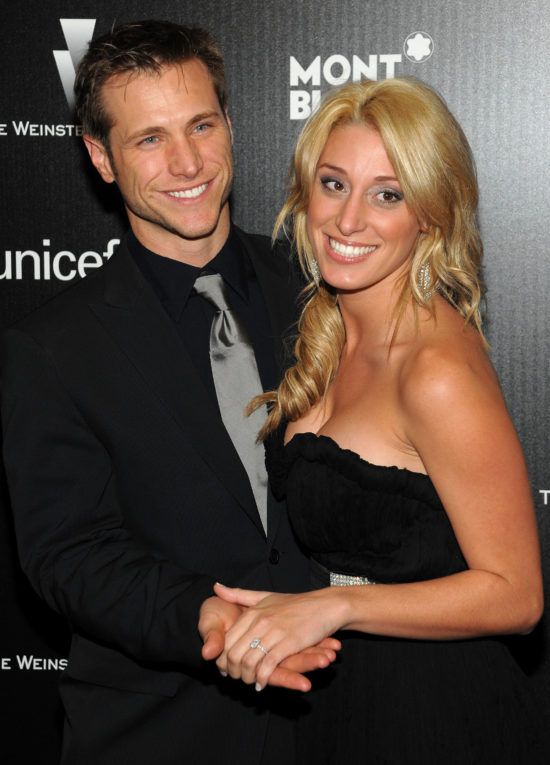 In season 15 bar owner Brad Womack had another shot at love following a disastrous attempt in season 11 which saw him propose to neither of his two finalists. Luckily season 15 went better and on the finale he proposed to Emily Maynard with a gorgeous 3 carat Neil Lane ring worth $50,000. Neil Lane brought out six rings to show Womack before his proposal and the stunning ring was the final one to choose from and it immediately caught his eye, which isn’t surprising considering it featured not only one large cushion-cut sparkling gem, but 263 more round-cut diamonds surrounding it. In the end, however, the two broke up while their season aired, got back together after the finale and finally ended their relationship in May 2011.

No one can forget Ben Flajnik’s shocking turn as the Bachelor in season 16 as the season’s villain Courtney Robertson managed to manipulate her way to the finale. Fans couldn’t believe it when Ben proposed to Robertson, and did so with quite the ring! Robertson was given a beautiful cushion-cut Neil Lane ring accented by 96 round-cut diamonds and set in platinum, coming in at $50,000 despite reports that the sparkler cost $80,000. Lane put a lot of effort into the ring for Ben following Ben’s rejection on The Bachelorette, and gave his Bachelor ring an intricate diamond crusted floral design with Lane stating that the tree tulip leaves on each side of the ring “reflect [Ben and Courtney’s] past, their present, and their remarkable future together.” Unfortunately their future wasn’t that remarkable and after a few breakups and makeups they called it quits in October of 2012. 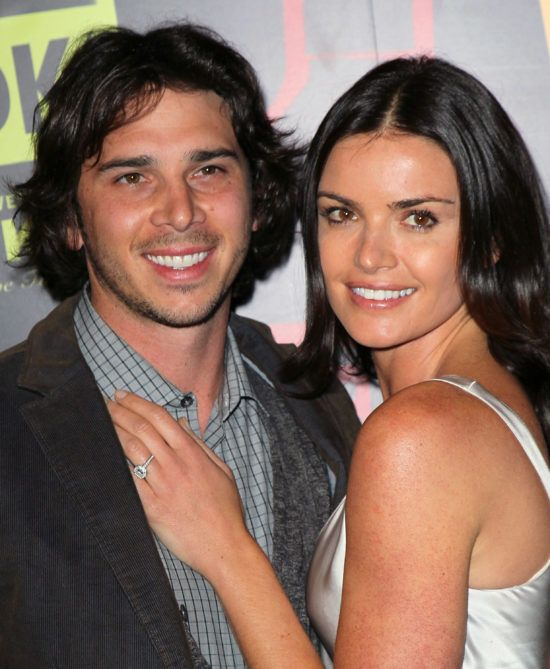 Given how nasty of a breakup they had, it is almost hard to forget that at one point Matt Grant and Shayne Lamas were a happy couple on season 12 of The Bachelor in 2008. On the finale it all came down to Chelsea Wanstrath and Shayne Lamas competing for Grant’s love and he ended up proposing to Lamas with a modest yet amazing 2.85 carat Tacori ring. The classic platinum and diamond eternity ring reportedly cost an incredible $65,000 but the couple broke up in July 2008 only a few months after the finale episode aired, and despite some nasty things said about each other in the media, Lamas claimed she was going to keep the ring “forever, for the rest of my life.”

Finally a happy Bachelor love story and one that comes with quite the ring! At the end of season 17 of The Bachelor Sean Lowe proposed to Catherine Giudici with an incredible 3.15 carat cushion-cut Neil Lane ring. Out of a selection of rings flown out to Thailand for the finale, it is easy to see why Lowe chose the stunning vintage-style ring that boasts not only one heck of a central diamond, but 164 smaller diamonds surrounding the gem and encasing the band. At the time it was the most expensive ring handed out on the show with a worth of $75,000. As fans know, the pair then walked down the aisle on live TV on January 26, 2014 at the Four Season Resort The Biltmore Santa Barbara where the two also exchanged Neil Lane designed wedding bands. 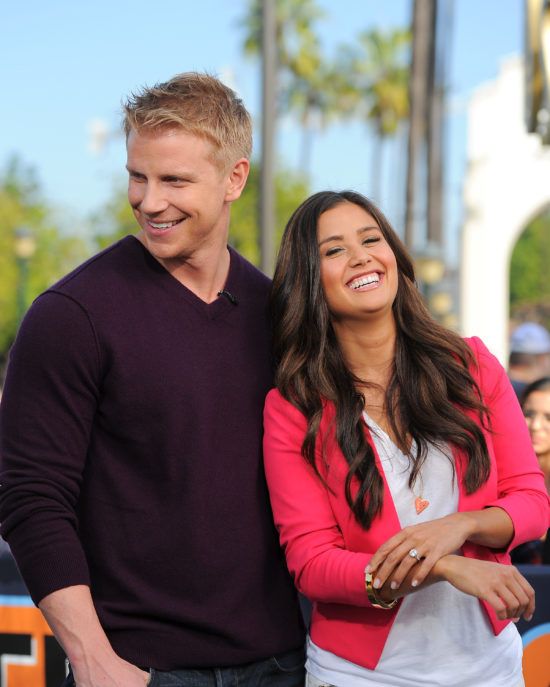 Season 22 of The Bachelor when “blast from the past” Arie Luyendyk Jr. was brought on as the lead of the season. While many weren’t thrilled by his quest for love, he sure caught everyone’s attention when he fell in love with two women and ultimately chose, and propose to Becca Kufrin at the final rose ceremony in Peru. Arie proposed with a 3-carat oval diamond sparkler worth an estimated $80,000. “It’s very feminine with a gentle look and soft edges,” Neil Lane said. “It has my signature detail under the gallery and lots of little diamonds that make it sparkle. It has a vintage look but with soft and feminine touches.”Of course, the ring didn’t stay on Becca’s finger for long as the finale also showed Arie breaking up with her in order to pursue his runner-up, Lauren Burnham.

Season 24 of The Bachelor came to a very strange ending when Bachelor Peter Weber proposed to contestant Hannah Ann Sluss in Australia after his other finalist, Madison Prewett, left. Weber proposed with a stunning 3.27 carat diamond ring in a pear shape. The ring also featured 99 round brilliant-cut stones and was set in platinum with an estimated cost of $82,000-$90,000. “It’s a really romantic ring and the pear, or almond, shape is very feminine with pretty, soft contours,” Bachelor Nation jeweler Neil Lane explained. “After Peter picked it out, he was really happy. He even kissed it and hugged me!” Despite Peter’s happiness, the ring was returned to Neil Lane before long when Peter and Hannah Ann split only one month after their engagement so that Peter could instead pursue Madison. 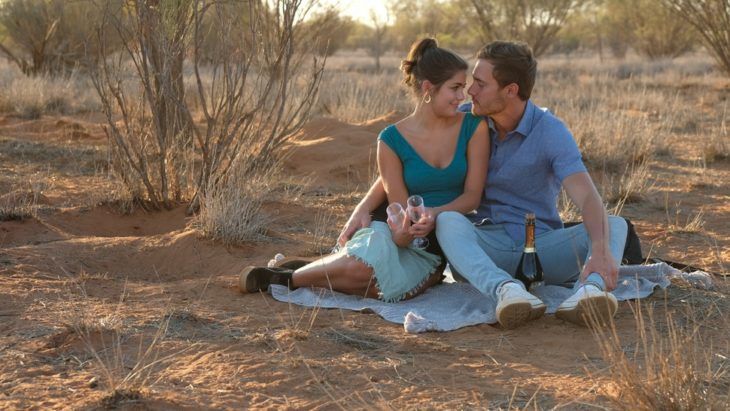 Following the dramatic and shocking season finale of Arie’s season, Arie, Becca and Lauren all came together for the After the Final Rose episode where Arie proposed to Lauren. Fortunately, he did not propose with the same ring he got Becca, and instead offered Lauren a 3.6 carat cushion cut ring with a center center stone surrounded by a halo of smaller diamonds and accented with two baguette diamonds on the band’s shank. With over 170 small stones as decorative accents, the ring is “totally encrusted with diamonds on all three sides,” Neil Lane said. “It’s really a wow ring — and for everyone involved, this whole season has been a ‘Wow’ experience. I really do hope Arie has finally found happiness.” All in all the ring cost a reported $85-90,000. 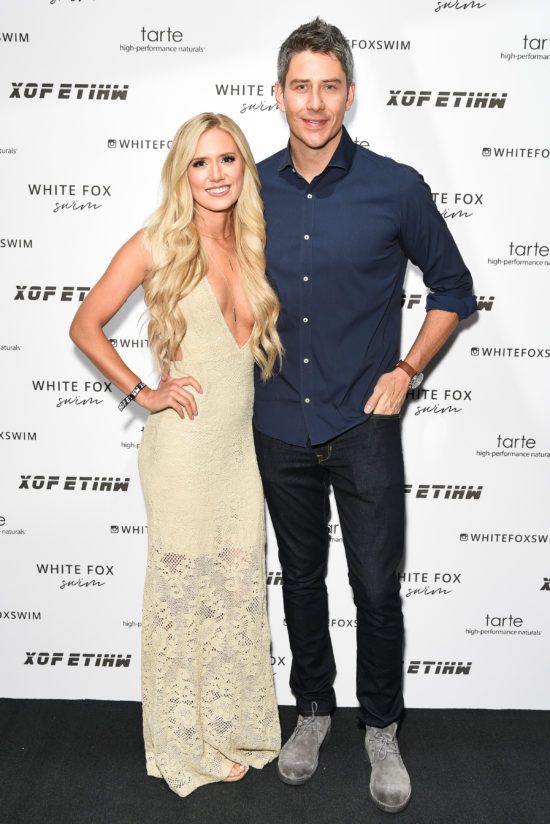 Chris Soules’ time as the Bachelor came in season 19 where after a focus on his country lifestyle he proposed to Whitney Bischoff in a cold Iowa barn and had the ice to prove it. Soules popped the question with a stunning 4 carat emerald-cut Neil Lane ring that blew all the others out of the water with a $92,000 price tag. The ring included a large center stone with a halo of 20 diamonds and a dynamic arch band which included even more diamonds! Even the Bachelor‘s most expensive ring at that point couldn’t keep the two together and after a six month engagement the pair called it off. 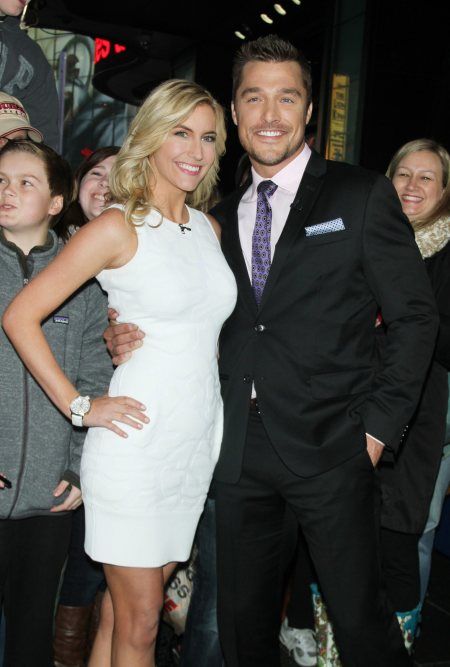 Only one season after Chris Soules’ record breaking ring, Ben Higgins decided he had to do one better with his proposal to Lauren Bushnell. When Higgins proposed, he did so with the largest ring ever chosen out of both The Bachelor and The Bachelorette franchises — a 4.25 carat Neil Lane ring. Lane custom designed the piece which is described as an “art deco masterpiece” and was worth a whopping $95,000. The ring boasts a central radiant-cut diamond which is surrounded by over 240 round and baguette-cut diamonds, culminating in one massive and sparkling engagement ring. Although the two seemed to be another rare Bachelor success story, after more than a year together and their own reality series, the two confirmed their split in May 2017. Bushnell went on to marry country singer Chris Lane. 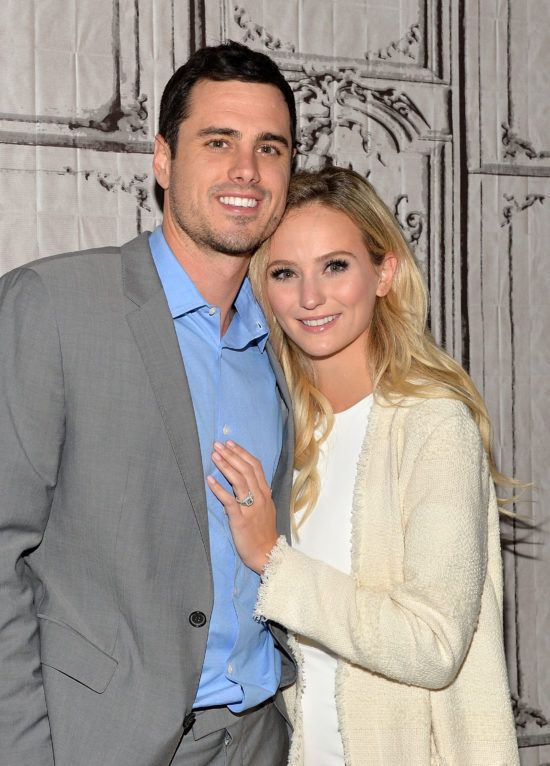 It certainly seems as if the competition was on in Bachelor nation after the ring Ben Higgins gave Lauren, and since it was his fourth time trying to find love on Bachelor nation, Nick Viall certainly went all out in season 21. Neil Lane flew six ring options out to Finland for Viall to choose from and he selected an incredible 3.75 carat round-cut diamond ring to propose to Vanessa Grimaldi. With a round-cut diamond at the center, the platinum ring also features a halo of smaller diamonds accumulating to around 164 additional round-cut and two larger baguette-cut diamonds. The beautiful ring has different estimates, but many bring the ring in at being worth $95,000 to $100,000, making it the highest valued ring in Bachelor history. Unfortunately, after a few months of dating the two confirmed they had ended their relationship. 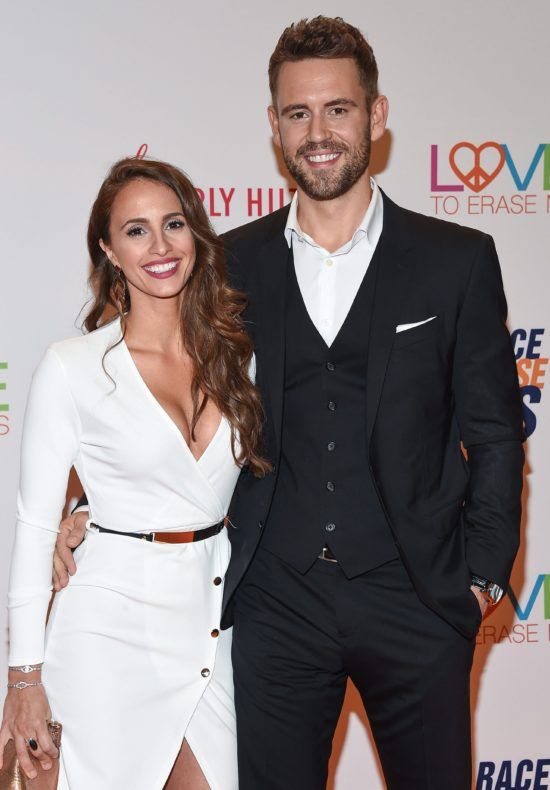 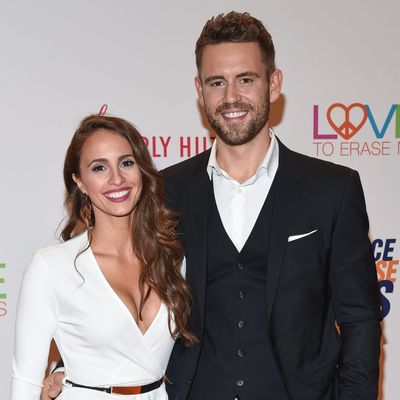