Melrose Place was an American soap opera that quickly became a smash hit on Fox during the ’90s. The show focused on a group of young adults living in an apartment complex in Los Angeles, California, whose lives all became entangled, and featured all the crazy drama of a daytime soap opera, but with much more well-crafted storylines. Created by Darren Star and produced by Aaron Spelling, the show was an extremely successful drama series that lasted an incredible 7 seasons on air! A true testament to its success, Melrose Place spawned two spin-off series, earned several Golden Globe nominations and drew in a whopping 10.8 million viewers for the series finale. It’s now been over 15 years since the show ended and many of the cast members have moved on to more successful careers, while others not so much. Here’s a look at how much the main cast is worth now!

Estimated Net Worth: $30 million. Many people will recognize Marcia Cross as Bree Van de Kamp on Desperate Housewives, but before she landed that role, she was Dr. Kimberly Shaw on Melrose Place! This was her breakout role and earned her much critical acclaim. Prior to ‘making it big,’ Cross did a few gigs here and there on shows like One Life to Live, Who’s the Boss? and Cheers. She then starred on Melrose Place for five seasons, but also appeared on a slew of other shows like Seinfeld, Boy Meets World, Ally McBeal, Spin City and The King of Queens. Cross dabbled in the film industry a bit with roles in Just Peck, Bringing Up Bobby, Bad Influence, and Always Say Goodbye. Her huge claim to fame was undoubtedly starring on the drama series Desperate Housewives for eight seasons. Her role as Bree earned her several award nominations including an Emmy, three Golden Globes, and five Screen Actors Guild Awards. Not only that, but it earned her a pretty penny too! She reportedly made approximately $375,000 per episode! In 2015 she did a brief stint on the show Quantico, but we’re pretty sure she doesn’t have to work another day if she doesn’t want to because she’s worth an estimated $30 million!

Estimated Net Worth: $9.8 million. Jack Wagner is credited as an actor and singer who is best known for his soap opera roles. Wagner has held an on-again-off-again role on General Hospital from 1983 to 2013. He played the character of Warren Lockridge on Santa Barbara for three years and took on the role of Dr. Peter Burns on Melrose Place from 1994 to 1999. Wagner even directed a few episodes! In terms of film acting, he’s appeared in Lady Killer, Frequent Flyer, Moving Target and Dirty Little Secret. Other projects he’s worked on have been in Titans, Sunset Beach, and The Bold and the Beautiful. More recently, he’s done appearances on Monk, Hot in Cleveland and Castle and in 2014 played the role of Bill Avery on When Calls the Heart. As a singer, he’s released six albums, three of which made it to the Billboard charts! Jack Wagner has been keeping busy and it’s paid off…big time! He’s now worth an estimated $9.8 million.

Estimated Net Worth: $8 million. Courtney Thorne-Smith is a well known actress for her main roles on popular sitcoms like Ally McBeal, According to Jim, Two and a Half Men and the primetime drama, Melrose Place. Courtney’s first job on television was a main role on the 7-episode series Fast Times. After that the projects kept rolling in. She became a series regular on Day by Day, held a small role on L.A. Law and did one episode appearances on shows like Growing Pains, Anything but Love, Jack’s Place, Grapevine and then landed her main role on Melrose Place as Allison Parker. More recently, she had a recurring role on Two and a Half Men as Lyndsey McElroy. Courtney’s got quite a successful career; however, when it comes to the film industry, she’s only starred in a few small projects like Welcome to 18, Lucas and Side Out — she’s definitely more of a television actress. Today, her main roles on popular series have done her justice because she’s now estimated to be worth $8 million!

Estimated Net Worth: $3 million. Here’s another Desperate Housewives actor who got his start on Melrose Place back in the ’90s. Doug Savant’s acting career is quite extensive with many television roles to date. He’s appeared on tons of popular series like The X-Files, Hawaii Five-O, Criminal Minds, Drop Dead Diva, Hot in Cleveland, Nip/Tuck, According to Jim, 24, NYPD Blue and the list goes on and on! Savant’s most important roles have been his series regular castings, first as Matt Fielding on Melrose Place and later his critically acclaimed role as Tom Scavo on Desperate Housewives. Doug has only had two starring film roles in Maniac Cop and Masquerade, but he’s also appeared in projects like All You’ve Got, Godzilla, Trick or Treat and Teen Wolf. Undoubtedly, Melrose Place and Desperate Housewives have been Savant’s biggest money-making projects. He’s now worth an estimated $3 million.

Estimated Net Worth: $3 million. Josie Bissett is best known for her role on Melrose Place as Jane Andrews-Mancini. Since the show finished back in 1999, she’s mostly focused on doing television movies and some one episode appearances, but she did have a main role on the series The Secret Life of the American Teenager. Bissett starred in the films Mikey and All-American Murder and did a few other small appearances. Overall, she’s earned much of her fortune from Melrose Place and her stint on The Secret Life of the American Teenager because, other than those two roles, she hasn’t been too active in her career. She’s still doing quite well for herself with an estimated net worth of $3 million.

Estimated Net Worth: $150 million. This American actor is most well known for his role on Melrose Place as Billy Campbell. He also appeared in films like The Rainmaker, alongside Claire Danes and Matt Damon, and in the film Gracie. More recently, Shue has turned his focus from acting to business. He co-founded the company Do Something and now sits on the Board of Directors. He then co-founded the social networking website called CafeMom which is now a family of companies, including the blog The Stir. Shue also hosts the webisode series “Mad Life” with comedian Chuck Nice and his mother-in-law, Joanie Robach. It seems Shue has found his calling as an entrepreneur because he’s worth more than any of the actors on this list! His net worth is a whopping $150 million.

Estimated Net Worth: $25 million. Locklear’s role on Melrose Place was met with critical acclaim. She received four consecutive Golden Globe nominations for Best Actress in a Television Series Drama! That’s impressive! In addition to this role, Heather Locklear is well known for her roles as Sammy Jo Carrington on Dynasty, Officer Stacy Sheridan on T.J. Hooker and Caitlin Moore on Spin City, a role that earned her another two Golden Globe nominations. More recently, she’s had a recurring role on Hot in Cleveland, the CW remake of Melrose Place and a main role on the TNT drama-comedy Franklin & Bash. These are just a few of her most notable roles, but she’s also appeared on shows like Two and a Half Men, Ally McBeal, Boston Legal, LAX, Scrubs and Rules of Engagement, just to name a few. Her notable film roles have been in Scary Movie 5, Flying By, Flirting with Forty, The Perfect Man and Uptown Girls. Heather Locklear is a well credited and well recognized actress in Hollywood and her hard work has paid off because she’s now estimated to be worth $25 million!

Estimated Net Worth: Unknown. Calabro’s breakout role was on Melrose Place as Dr. Michael Mancini and oddly enough he was the only actor to stay with the series for its entire run from 1992 to 1999. He also directed a few of the episodes. After Melrose Place ended, Calabro moved onto some recurring roles on shows like Without a Trace, Touched by an Angel and Nip/Tuck. He’s held a recurring role on Greek and starred in the CW remake of Melrose Place in 2009-2010. More Recently, Calabro’s did a brief appearance on Castle and season 3 of Glee as the father of ‘Puck,’ as well as starred in the small films Elle: A Modern Cinderella Tale and Chill. His career has definitely hit a bit of a road block in terms of success. His net worth is largely unknown because he hasn’t been very active lately in his career, but he’s probably worth around $600 thousand. 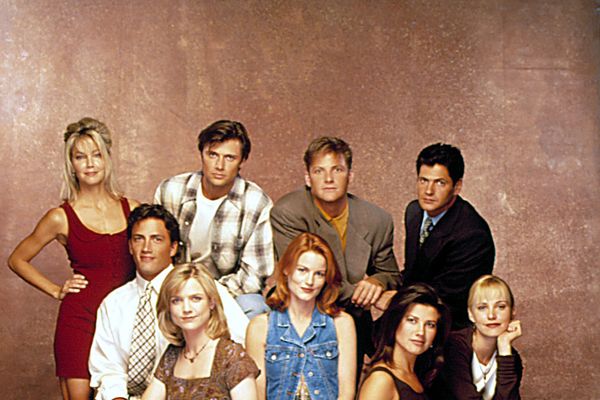