It was a dramatic week on The Young and the Restless, Days of Our Lives, General Hospital and The Bold and the Beautiful! Find out what you missed with your spoilers recap for February 24-28:

Monday on Y&R, Adam was eyeing a return to Newman while Nikki wondered if Victor was doing the same. Also in that episode, Chelsea warned Abby; Sharon took control; and the Newmans unified for Victoria.

Gabi used a stunning revelation to her advantage on Monday’s episode of DOOL, and Maggie wrestled with unsettling memories. Also, Ben and Ciara were separated once again when he was escorted back to prison while Victor pressured Will not to expose Maggie.

There were a few new developments on GH on Monday. Michael enjoyed his morning; Monica enjoyed good news; and Jason was of comfort.

Hope deliberately interrupted Thomas’ close moment with Zoe on Monday on B&B while Brooke made a deal with Ridge in regard to Thomas.

Tuesday on Y&R, Billy turned down Jill’s offer while Mariah asked Tessa if she was sleeping with Tanner. Also in that episode, Abby and Phyllis battled; Jill revealed a new business venture; and Phyllis received an intriguing offer.

Sarah and Eric were faced with a difficult decision on Tuesday’s episode of DOOL, and Maggie confronted Xander and Victor about the night of Adrienne’s demise. Also, Gabi made a last ditch effort to avoid prison, and Valerie and Julie urged Eli to work things out with Lani.

There were a few developments on Tuesday on GH. Nelle dug her heels in; Carly delivered a stern warning; and Sam unleashed on Julian.

Flo and Wyatt planned how to help the terminally ill Sally on Tuesday on B&B. Also, Katie strived to save Sally’s job at Forrester Creations.

Wednesday on Y&R, Nick warned Victor about Adam while Billy cried at Victoria’s beside. Also, Kyle and Summer fantasized about each other at work; Adam’s motives were called into question; and Chelsea looked to the future.

Eli and Lani reunited on Wednesday’s episode of DOOL, and Maggie made a confession to Sonny. Also, Chad gloated to Gabi that she was fired from DiMera, and Justin was thrown when “Steve” showed up on his doorstep.

There were a few new developments for GH fans on Wednesday. Jordan brought Laura up to speed; Nikolas confided in Liz; and Joss received surprising information.

Sally learned that Ridge would build on her designs for use in the couture line on Wednesday on B&B. Also, Wyatt shared an intimate moment with Flo prior to them making the ultimate sacrifice.

Thursday on Y&R, Billy was given a reality check by Nikki while Kevin helped to crack a code. In that episode, Devon also got his money back with a cryptic message, and Victoria woke up but didn’t want to see Billy.

Maggie offered a heartfelt apology to Justin during Thursday’s episode of DOOL while Ben prepared for his execution. Also, Stefano attacked Gabi, and Will had a big surprise for Sonny.

A few things happened Thursday on GH. Carly was alarmed; Alexis thought about what might have been; and Trina and Cameron headed out on their first date.

Wyatt’s stunning admission and proposal took Sally off guard on Thursday on B&B while Katie shared a special moment with Flo in light of her selflessness.

Friday on Y&R, Jack shared some disturbing news while Victoria sought answers. Also, Abby gave Phyllis her shares of the hotel but revealed a new plan, and Chance enlisted Kevin’s services against Phyllis. Meanwhile, Nick lashed out at Victor.

Stefano told Justin he wanted Marlena in exchange for Kayla on DOOL on Friday while Ben said goodbye to Clyde before his execution began. Also, Rafe confronted Evan about his deceit, and Ciara received key information about Jordan’s killer.

There were a few developments on GH on Friday. Spinelli came through; Willow shocked Michael; and Sasha needed to do what is right for her. 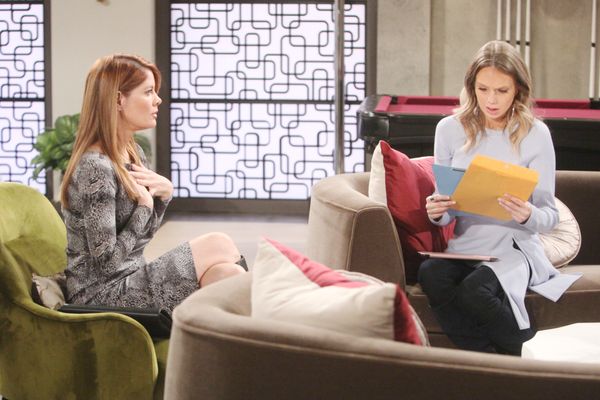 Young And The Restless Spoilers For The Week (February 24, 2020)