Days Of Our Lives: 12 Disliked Demises Of All Time

When a soap opera character passes away, a little piece of fans’ heart goes along with them. Viewers become invested in the people they see on their favorite daytime dramas, and Days of Our Lives (DOOL) fans are no exception. Whether it’s because an actor has moved on to bigger or better Hollywood opportunities or it’s to add another layer to a plot twist, no matter what the circumstances are, soap opera demises can be a devastating thing to fans. Below are 12 of DOOL’s truly disliked demises of all time.

Arianna Hernandez was a character who was on DOOL for a short period of time between 2009 to 2010 but made a huge impact in Salem. As a sister to Rafe, Gabi, and Dario, as well as BFF with Melanie Jonas, Ari had tremendous roots in the little town and shared a beautiful love story with Brady Black. While storyline-wise her demise did add a layer to the on-going plot, her passing was still quite underwhelming to many fans.

The land of soap operas has changed significantly now that the internet and social media are around. Actors can tweet about the comings and goings of their show and spoilers can sometimes ruin a plot twist for fans. Many DOOL viewers knew that Shawn Christian, the actor who portrayed Daniel Jonas, was leaving the show which meant they also wondered how his exit would play out. It was quite saddening when he was axed. A drunk-driving accident took his life, Brady Black got his heart, and fans said goodbye to Shawn and Daniel knowing it would be hard to ever bring Christian/Jonas back in any capacity.

Digging into DOOL’s history vault we come across another underwhelming death in 1992. Isabella Toscano was smart, kind, beautiful and had John Black head-over-heels in love with her. She was also a major DOOL player during the time she appeared on the show from the late 1980s until her death in ’92. Even though fans knew it was coming since she had been diagnosed with pancreatic cancer, her passing was still considered a major letdown. John and Marlena make an incredible super couple, but if Isabella had lived, they may not have stood a chance.

While DOOL fans have yet to see him onscreen, it was confirmed by Kirsten DiMera late in 2017 that E.J. was alive and well. However, when he passed away in 2014, many viewers were quite upset. E.J. was one of those characters that oscillated back and forth between scoundrel and hero and shared super-couple status with entertaining better-half Sami Brady. Will he return? Now that fans know he’s alive, anything is possible.

Jack Deveraux returned to DOOL in December 2017 (as a ghost), but the appearance simply made audiences wonder why the character was done away with in the first place. As one of Days‘ most well-liked Salem residents of all time, audiences loved his quirky personality and his romance with Jennifer Horton. While it’s been almost six years since Jack passed, he did go out in a heroic fashion, risking his life to save his daughter Abigail. The only silver lining in all this is that fans do get the treat of seeing him now and again, visiting loved ones on the show as a spirit.

Most likely the last thing to watch as a soap opera fan is when a child passes away. Whether you are a parent or not, watching a younger character perish can bring out a ton of emotions from fans. One very underwhelming (and saddening) demise was when Zack Brady passed away. The child was hit by a car his half-sister Chelsea was driving and never recovered from his injuries. In a Greek-tragedy twist, his liver was given to his little niece Claire to save her life.

When Bo came back to Salem after a three-year hiatus in 2015, DOOL fans rejoiced everywhere. The Brady prodigal son had finally returned, just in time to save Hope, and the super-couple picked up exactly where they left off in a matter of hours. However, the most underwhelming part of this seemingly happy ending was that there was nothing happy about it. Bo was diagnosed with a brain tumor and days after returning to Salem, the Bradys and other loved ones were saying their final goodbyes to him. Underwhelming doesn’t seem to cover what many longtime DOOL fans were feeling the moment they realized the iconic Bo Brady was gone for good.

Thankfully, Marlena Evans is alive and well today, but that wasn’t always the case. Digging back into the DOOL history vault comes a disliked demise in 1987 when troublemaker Orpheus kidnapped Marlena in an act of revenge against Roman Brady, her then-love. Roman was able to shoot Orpheus but was unable to rescue Marlena from a plane she was being held captive on. Roman, as well as DOOL viewers, watched in horror as the plane exploded. Her body wasn’t found, but in 1991, she resurfaced and re-entered the land of Salem.

Lexie Carver was a beloved DOOL character that lived in Salem from 1987 to 2012. She was one that walked the fine line between good and evil, being good for the most part, but at times doing questionable things. Carver was considered a fan-favorite, which is why her demise was especially devastating. In 2012 it was discovered that she had brain tumors and with only weeks to live, family and friends helped Lexie scratch things off her bucket list, including turning Salem’s Town Square into Paris. She passed away peacefully with Abe by her side as DOOL fans everywhere balled their eyes out.

Will Horton returned from the afterlife late in 2017, which is a true testimony to what a mistake it was for DOOL writers to do away with him in the first place. He was a victim of the Necktie Serial killer in the fall of 2015, which received much backlash from DOOL fans. That is why it is no surprise that Will returned in 2017. Sure, the storyline that resurrected him was outrageous, but at least Horton is back.

When Steve passed away in 1990, many DOOL fans were quite upset. He was a huge fan-favorite, one half of the iconic Stayla super couple with Kayla Brady, and a staple with Days. He was injured in a boat explosion that left him in a critical state. While he did almost recover, bad guy Lawrence Alamain poisoned his IV while he was in a coma at the hospital. Steve’s return was inevitable, as Lawrence mysteriously had his coffin switched before he was buried, but DOOL fans waited well over 15 years to see their beloved Patch return.

Yes, DiMera was a schemer, but one the fans loved to hate. As Salem’s public enemy number one, he made storylines intriguing and had nine lives as it seemed nothing could truly ax Stefano and he would always return from the afterlife. In early 2016, Days fans watched in horror as Hope Brady shot the infamous soap opera bad guy three times in the stomach. It simply felt like the end of an era. However, in true Stefano fashion, he would return about a year later. Sadly, the actor who played DiMera (Joseph Mascolo) passed away in late 2016, meaning that while the character of Stefano still lives on, the brilliant actor that played him remains alive in the form of the soap opera legacy that he created. 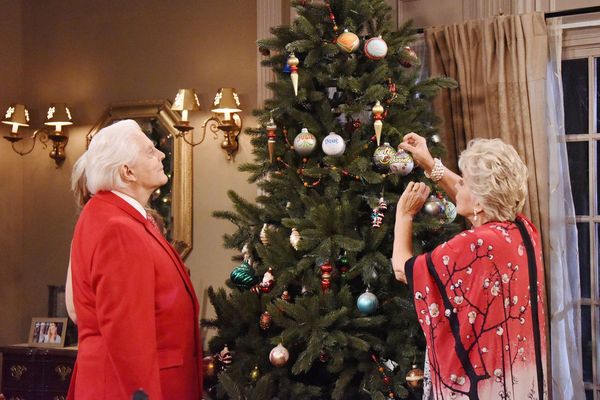