Gilmore Girls is arguably one of the most beloved shows of all time. It has one of the strongest cult followings — and for good reason! The WB (later CW) series ran for seven seasons from 2000 to 2007 and was recently brought back for a Netflix revival. One of the best things about the show was the amazing cast and all the eccentric characters who lived in Stars Hollow. Similar to other long-running shows, Gilmore Girls unknowingly (and sometimes knowingly) had actors play two different characters! We’ve combed through the series and found 12 examples:

In the pilot episode of Gilmore Girls, Jacqui Maxwell played a Stars Hollow student who is obviously high in class. In episodes 16 and 17, “Star-Crossed Lovers and Other Strangers” and “The Breakup, Part II,” she played the part of Tristan’s girlfriend, Summer. While it could be argued they were potentially the same character, their appearances were very different!

Floyd Van Buskirk never plays a very big role, but he makes his appearances! He made his Gilmore Girls debut in season 1, episode 5 as Jed, and then again in season 5, episode 2, “A Messenger, Nothing More,” as Henry, who is apart of the Renaissance Fair circuit.

Although she played a small role, Jill Brennan was one of the first characters on the show! She was cast in the pilot episode as Mrs. Traister, but then reappeared a few seasons later in season 4 and 5 as Carrie Duncan, or should we say, ‘Crazy Carrie.’ She was one of Liz Daines’ best friends from high school, who also had a crush on Luke.

9. Sean Gunn as Kirk and Mick

Any fan of Gilmore Girls knows that Sean Gunn, who primarily played the role of Kirk Gleason, wore a lot of different hats throughout the series. He made his first appearance in season 1, episode 2 as Mick, a DSL installer. Then he showed up in season 1, episode 3 as Swan Man, until he finally settled into the role of Kirk for the rest of the series.

8. Samantha Shelton as Debutante and Bridesmaid

Samantha Shelton first played the role of Libby, a fellow debutante who tells Rory how serious the night is only to later pull out a flask and offer a drink to Rory! It turned out it was her fifth year as a debutante. She showed up again in season 6 as a woman named Walker who was one of the bridesmaids at Honor’s wedding.

How could we forget Alex Borstein, the sassy (borderline rude) harpist at the Independence Inn? The actress played this character for several episodes in season 1, but when she returned in season 3, she played the role of Miss Celine, Emily’s personal stylist. Prior to both of these characters, Borstein was actually cast in the role of Sookie, but in the end, it went to Melissa McCarthy. Fun fact: she was also the voice of the wife on Lorelai’s neighbor’s answering machine in the episode where Rory gets caught in the sprinklers.

Garfunkel and Oates actress Riki Lindhome showed up in Stars Hollow as a nosey high school student who asks Lorelai a bunch of questions about teen pregnancy when she comes in to give a talk about her career. She then shows up again later on in the series as one of Rory’s fellow students, but this time at Yale University. Juliet is a friend of Rosemary, who sometimes also hangs out with Finn, Colin, and Logan.

5. Lance Barber as Hugo and Man at Inn

Lance Barber’s first role on Gilmore Girls was so minor it would have easily been missed. He was cast as an extra who played a man at the Inn in season 2, episode 7. Later on in the series, he takes on a slightly bigger role, but still very small, as Hugo in season 7, episode 8.

4. Sherilyn Fenn as Sasha and Anna

Sherilyn Fenn played two roles on Gilmore Girls. First, she was Sasha, Jimmy’s girlfriend in the backdoor pilot for Jess, “Here Comes The Son.” Jess meets her for the first time when he goes looking for his father in Venice Beach. She later showed up in season 6 as Anna Nardini, an ex-girlfriend of Luke, who also happened to be the mother of his child, April Nardini.

Not even the most loyal Gilmore Girls fan would catch this! Eileen Barnett first shows up as Nanette in season 1, episode 3, “Kill Me Now.” Her second appearance isn’t until season 3’s episode “Happy Birthday, Baby,” in the character of Mrs. Leahy.

Not long after he created Family Guy, Seth MacFarlane appeared in season 2 of Gilmore Girls as Zach, one of the fellow graduates at Lorelai’s graduation who began harping on her for having a wealthy family. He came back the following season to voice the character of Bob Merriam, Emily’s lawyer in the episode “I Solemnly Swear.”

Marion Ross played two different family members on Gilmore Girls. She was Richard’s mother, Lorelai “Trix” Gilmore, in season 1, 3 and 4, but also played the petty niece, cousin Marilyn in season 4 and 5. While all the others flew under the radar with most viewers not even noticing the overlap in characters, this one was particularly confusing, especially during the funeral episode. 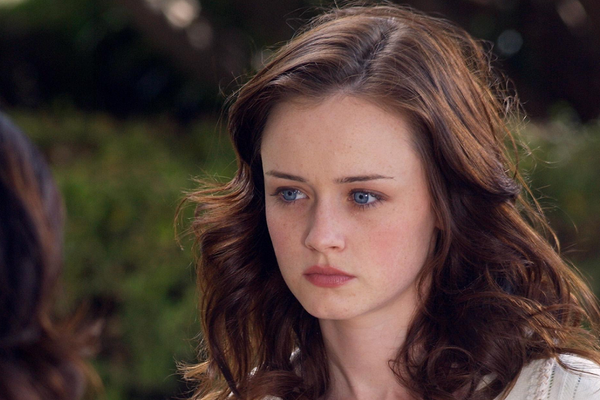