Let’s face it, Rory Gilmore’s love life was far from interesting throughout the span of seven seasons. She only had three real relationships, a few dates in between and then, of course, a few unfortunate men who tried to date her and failed. We’ve compiled a list of all Rory’s love interests, which includes relationships, blind dates and unrequited love and ranked them all from worst to best!

These two never really dated, but simply went on a date together. It was an arrangement set up by Emily Gilmore, Rory’s grandmother, so they were doomed from the start. Emily never has good judgement on what Rory needs when it comes to her love life. All she takes into consideration is their family linage and what their bank account balance is. Graham was initially really nice, but when he invited her to hang out later he took her to a sports bar where he proceeded to get drunk and be obnoxious with all of his friends. Rory was extremely uncomfortable and he showed no interest in actually getting to know her. This date ended wit her calling her married ex-boyfriend, Dean, to come pick her up and bail her out of this awful date.

Rory met Trevor when she was a freshman at Yale. Their relationship lasted the entire span of one date and that was it. He was also the first guy she dated after she broke up with Jess. He’s pretty memorable because this is the first time Rory goes out on an actual date with someone that she doesn’t know. Prior to this she’s only ever had serious relationships with people she already knows, so we get to see her do something that actually resembles “dating.” She agrees to go on a date with him but it’s an utter disaster. The two of them have nothing in common, even though he seems to be a nice enough guy, it wasn’t a good match and that was pretty clear from the start.

Rory attends a party with Robert in season 5, but sadly for him, she’s just using him to make Logan jealous. At this stage in the show, Logan and Rory aren’t exclusive so the two are dating other people while seeing each other. Robert and Rory meet through Logan, but Robert doesn’t know Logan and Rory are secretly seeing each other, so he asks her out. She agrees to go to a Quentin Tarantino party with him. Logan is at the party and gets jealous which is good because it leads to the two of them giving their relationship a try for real, but poor Robert gets treated badly on the way. Logan and Rory end up kissing while Robert is fetching some drinks and thankfully he doesn’t seem to notice. Rory and Robert only have this one date because she goes on to become exclusive with Logan.

Before there was Jess, there was bad boy Tristan who tried relentlessly to get under Rory’s skin. It was hard to tell if he had a crush on her or he was just plain mean. He pulled the classic elementary trick of being mean to a girl he has a crush on. It definitely didn’t work, especially with a girl like Rory. She immediately was turned off by him and never really reciprocated his feelings, but she tolerated him and by the end they were friends. Rory didn’t realize he had real feelings for her and chalked up his bad behavior to him just being flirtatious. Unfortunately for Tristan, he was shipped off to military school, so we’re not sure if he ever would have matured enough to date Rory for real….probably not, but they ended on good terms.

Dean was Rory’s first boyfriend and their relationship was pretty great until Jess came along. It was clear from the get-go he was head-over-heels for her and was fiercely protective of her. We’re pretty sure if they could have made it work, these two would have been very happy together. The only problem was that Dean obviously cared about Rory more than she cared about him. She never really treated him well. When he surprised her with a car that he was building from scratch and told her that he loved her, she said nothing. When they gave their relationship another shot, she lead him on even though it was pretty clear she had started to develop feelings for Jess. When they broke up, she started dating Jess right away and didn’t seem to care if it hurt Deans feelings. When Dean married Lindsay, she began to realize that she made a mistake by dumping him for Jess. Dean and Rory ended up having an affair, ending his marriage and then gave their relationship another shot once he was separated. She couldn’t handle the stress of people being mad at her for breaking up a marriage though, so she fled town and abandoned Dean once again.

Even though Marty and Rory never actually dated, he pined after her and was actually a really good guy. He’s near the top of this list just because we’re pretty sure if Rory had given him a chance, they would have made a really good couple. It was clear that Marty would have treated her really well. He was smart and they had a lot in common. Marty met Richard and Emily at the football game and they loved him. He understood Rory’s love for food as he snagged her the best snacks after attending a fancy party. He was fluent in pop culture and loved to binge watch movies with Rory. Unfortunately, Rory clearly didn’t reciprocate the feelings and he got ‘friend zoned’ early on in their relationship. She was also already crushing on Logan by the time he finally worked up the courage to tell her that he liked her, so it was too late. Even though Marty comes back in season seven and is a totally different person (the word “jerk” comes to mind), we still think he’s one of Rory’s more interesting love interests. We blame the writers of season seven for Marty’s inexplicable transformation.

Jess was the stereotypical “bad boy” who pulled Rory away from her long-standing relationship with Dean. Viewers are definitely split with it comes to Jess. They either love him or they hate him! There’s not denying these two had a lot of chemistry and he was definitely smart enough for her, but Jess had a little too much teen angst for a good-girl like Rory. It was pretty clear from the beginning he would let his bad attitude get in the way of their relationship, and at times, he treated her badly because of it. He couldn’t pull his life together, and didn’t want to, whereas Rory was extremely career-driven. They were just an odd match and definitely didn’t have the support of Rory’s family. When he finally does get his life together and wants to give it another shot, she’s not in the right place. She’s in a relationship with Logan, just quit Yale and is living in her grandparent’s pool house. It seems timing was never on their side.

Logan was by far Rory’s most serious relationship. The two met while she was still attending Yale and they both worked at the school newspaper. They seemed to have a lot in common and, despite his cocky attitude and arrogance, they somehow complimented each other well and he treated her pretty well. Their relationship fell during a time in Rory’s life when she wasn’t sure where she was going or what she’d end up doing, and Logan was totally understanding. He even stole a boat for her when she flew off the rails! Granted it was his father who sent her into a downward spiral when he told her she wouldn’t make a good journalist, but Logan stood up for her when it came to his parents. These two didn’t let their stale attitude affect their relationship. Logan was different than any of the other guys Rory dated because he pushed her to do things outside her comfort zone. This is something Rory definitely needs! She can be a little plain Jane sometimes, so their personalities balanced each other out. 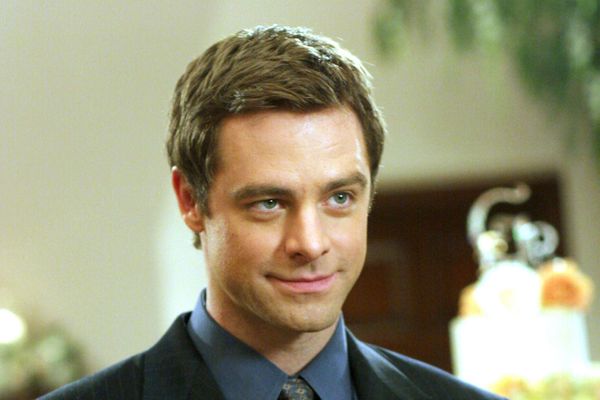