As much as we love Paris, her relationship with Professor Asher Fleming was weird. Paris’ detailed references about her love life with Asher made us uncomfortable, as did Rory’s awkward encounters with him as her professor. Although we didn’t like seeing Paris upset about his passing, we were happy when she moved on to a relationship that was more age appropriate.

To say that Rory and Dean’s relationship was dysfunctional would be an understatement. At first we were excited to see Rory with Dean together because their relationship was gawky in that cute kind of way. But after their split, Dean’s fixation on Rory grew tiring and ultimately led to his failed marriage with Lindsay. Feeling she made a mistake in dumping Dean, Rory rekindled her romance with him, and didn’t seem bothered about having an affair with a married man. She bailed on Dean when things got messy by spending her summer in Europe with her grandmother, Emily. Despite having a heartbroken wife, Dean thought it was a smart idea to pursue a relationship with his flakey ex-girlfriend. Not surprisingly, things didn’t work out well for them because they could never recapture the early days of their romance.

From the start, the relationship between Luke and the lawyer Nicole felt forced. Luke met Nicole while she was negotiating a legal contract on behalf of her client, Taylor Doose. Nicole was smitten with Luke and the two started an odd relationship that had us wondering what they had in common. Nicole never liked that Luke was close to Lorelai, which made things more complicated than Luke wanted to admit. Then there was their spontaneous marriage while vacationing on a cruise, after which they tried to make the marriage work — painfully, might we add. And if that wasn’t enough, Luke found out Nicole was cheating on him after he found a pair of men’s socks that weren’t his.

Note: if you have to go to great lengths to convince someone to go out with you, then it’s probably not going to work out. Jason Stiles, or “Digger” as he was better known, was determined to get Lorelai to go out on a date with him. Lorelai eventually decided to give Digger a chance, but hid the relationship from her parents. The two seemed more like quirky friends than a couple, as the chemistry was seriously lacking. Digger’s decision to sue Lorelai’s father Richard didn’t help, and brought the end of his relationship with Lorelai.

Lorelai’s relationship with Rory’s Chilton teacher Max Medina had its moments, but the two failed to convince us that their relationship ever had a chance. Yes, Max was an intelligent and confident guy, but he was also a little dull. He jumped too quickly at the idea of marriage, and failed to recognize that Lorelai wasn’t entirely ready to commit. The marriage proposal was born out of a jealous argument, which also wasn’t a good sign. And instead of being a mature adult and discussing her feelings with Max, Lorelai abandoned him on their wedding day, and didn’t contact him until long after everything ended.

We admit, we have a love/hate thing when it comes to Jess and Rory’s relationship. On the one hand, Jess was the bad boy who challenged Rory intellectually. But on the other, Jess was troubled and took his abandonment issues with his father out on Rory. He left to find his dad without so much of a word to her. When he finally told Rory he loved her, he promptly got into his car and left. When we see Jess in season 5, he’s more grounded and ready for a stable relationship. Unfortunately, Rory’s life had taken a detour by that point after she dropped out of Yale and moved into her grandparents’ pool house. The timing for Jess and Rory never seemed right, but perhaps that will change in the show’s upcoming reboot on Netflix.

Christopher was Lorelai’s charming and handsome boyfriend in high school, and Rory’s father. The two of them had an on-again off-again relationship throughout the series that never seemed to come together in the right way. It didn’t help that Christopher had a tendency to disappear from the Gilmore girls’ lives for long periods of time. Although Lorelai and Christopher eventually married, the underlying problems in their marriage couldn’t be resolved. Christopher was jealous of Lorelai’s friendship with ex-fiancé Luke Danes, and Lorelai couldn’t admit that she still had feelings for him. But in one of those rare moments where we saw them acting like mature adults, Lorelai and Christopher finally discussed their problems and mutually agreed to a divorce.

Lane Kim was known for her cool, quirky personality, which made her one of the show’s best characters. We just wish the show had done her justice by pairing her with a better mate. Yes, Zack adored Lane, especially when it came to taking care of her and the twins. But he was also pretty daft compared to Lane’s quick wit, street smarts, and expansive music knowledge. The two were barely married before they found out they were pregnant with twins. As a result, Lane had to put her dreams of being in a rock n’ roll band on hold and settle in Stars Hollow, at least until the twins were easier to manage. With everything she had worked for, Lane deserved much, much more.

Rory’s relationship with Logan Huntzberger was her most serious one, and had the potential to be long lasting. Although Logan was cocky, he encouraged Rory to get out of her comfort zone and try new things. Unfortunately, some of those things involved stealing a yacht after Logan’s father told her she didn’t have the talent to be a journalist. They also shared similar interests and worked on the school newspaper together. The couple managed a long distance relationship despite its challenges, and both had big ambitions after they graduated from Yale. While we could have imagined them as a married couple, we’re glad Rory pursued her dreams, even though that meant ending her relationship with Logan.

One of the things Gilmore Girls taught us was that there is someone out there for everyone — even Kirk. The eccentric and awkward Kirk lived with his mother and seemed destined to be a bachelor for life. But lo and behold, he managed to find love in the little town of Stars Hollow. Lulu, a former girlfriend of one of Kirk’s brothers, came to visit him. When he realized the visit was a date, Kirk solicited the help of Luke to prepare for the special day. Lulu appreciated Kirk’s unique personality and the couple had a relationship throughout the rest of the series. Even Kirk’s night terrors – where he ran and screamed naked through town – didn’t scare her away. Now that’s love.

Chef Sookie and farmer Jackson had one of the cutest relationships on the show. Early in the series when they’re both single, the two constantly bickered with each other over the quality of produce. Yet under this facade, the two had feelings for each other. After mustering up some courage, Sookie asked Jackson out on a date and the two started a relationship that turned into marriage. Like any couple, Sookie and Jackson had their problems, but they always worked things out in the end. They were one of those couples who are perfectly suited for each other, and we couldn’t help but love them for their kookiness.

This list wouldn’t be complete without the inclusion of Gilmore Girls’ most prominent relationship. From the beginning, Lorelai and Luke had something between them, but it took a few seasons — and a few relationships — before they finally got together. But just when we thought they would tie the knot, Luke found out he had a daughter from a previous relationship. Their relationship began to falter with Lorelai finally pleading with Luke to elope with her. Luke refused, saying he didn’t like ultimatums, which prompted Lorelai to visit Christopher and sleep with him. Despite the faults in their relationship, neither of them were able to move on, and continued to pine for each other. In what has to be the sweetest gesture of love in the entire series, Luke spent hours organizing a farewell party for Rory, but really for Lorelai. In the final episode of the series, the two kissed, which has us hoping they finally get married in the show’s reunion.

Lane’s relationship with band mate Dave Rygalski was one we wish hadn’t ended. The first time they met, they had an adorably nerdy conversation about how it’s sacrilegious to replace the lead singers of bands. Then there’s the time that Dave spent his entire Thanksgiving playing hymns for Mrs. Kim just so he could spend some time with Lane. Dave recognized how talented Lane was, and always encouraged her to dream big. He even got the approval from Mrs. Kim herself, no small feat for a woman who was so protective of her daughter. Lane and Dave understood each other and supported each other’s ambitions. We only wish they could have reconnected as they were perfect right from the start.

Richard and Emily’s relationship doesn’t get the credit it deserves. The two had their challenges, but even in those moments, they never stopped loving each other. And who can forget their emotional conversation after Richard’s heart attack, which perfectly sums up the nature of their relationship? Emily tells him, “Richard Gilmore, there may be many things happening in this hospital tonight, but your dying is not one of them. I did not sign on to your dying. And it is not going to happen. Not tonight, not for a very long time. In fact, I demand to go first. Do I make myself clear?” Lovingly Richard replies, “Yes, Emily. You may go first.”

Paris and Doyle’s relationship was one of the best things to happen on Gilmore Girls. From their hilariously awkward hookup to their oddball relationship, the couple loved the very things about each other that other people couldn’t stand. They weren’t afraid to try new things together, and they never stood in the way of the other’s dreams. When Paris grew scared and tried to push Doyle away, he told her he was staying put: “You are the strongest, most infuriating, most exciting woman I have ever met in my entire life, and there is no way I’m gonna let you go.” We can’t wait to see what these two have been up to over the years! 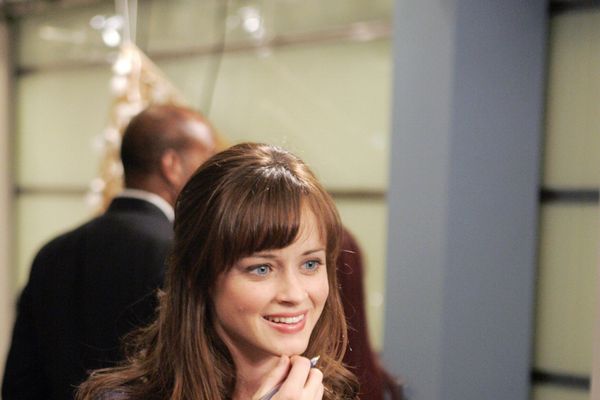