Songs You Might Not Know Were Written By Chris Stapleton

Back in 2015, Chris Stapleton took the country world and fans by storm with the release of his debut album, Traveller. What many fans didn’t know, however, was that Stapleton had been a well-known and respected name in the music industry for several years, with his songwriting skills becoming renowned by artists of many genres. His wheelhouse, unsurprisingly, has always been country so, although many fans think their favorite singers have come up with their own biggest hits, that isn’t the case, and often you can find Stapleton’s name attached to it instead. Here are 12 popular songs you didn’t know were actually written by Chris Stapleton:

“Never Wanted Anything More” was the first single released from Kenny Chesney’s 2007 album Just Who I Am: Poets & Pirates, and it didn’t take long for the song to become a hit. Within eight weeks on the charts, the single reached number one, making it the popular singer’s fastest-climbing number one single, and the men behind it were Chris Stapleton along with Ronnie Bowman. The single went on to keep its No. 1 spot for five straight weeks, and always the humble man, Stapleton praised Chesney, saying, “He can take a good song and make it do great things.”

Luke Bryan’s “Drink a Beer” was without a doubt the most emotional off of his fourth studio album, 2013’s Crash My Party. Many fans thought Bryan had written the song about mourning the sudden loss of someone close as he lost both his siblings in sudden deaths, but Bryan didn’t write it at all — Chris Stapleton did along with Jim Beavers. Stapleton revealed that Beavers wrote the chorus but it was his idea to make it  “a little darker.” Stapleton added, “I kind of helped [Beavers] cross the finish line on it, and then we really didn’t think much more about it. I think we thought it was a pretty good song. But then Luke took it, and it really brought weight to it when Luke did it because of his family situation. So, once again, it was one of those things where the right artist and the right song turned into something special.”

Joss Stone’s “Don’t Start Lying to Me Now” has a heavier R&B influence than country, which means many were surprised to learn that the track was written by Chris Stapleton. The song appeared on Stone’s 2011 album LP1 and is often recognized as one of the most unique in Stapleton’s extensive songbook. Stone recorded the album in Nashville, Tennessee in only six days with “Don’t Start Lying to Me Now” released as the third single.

2006’s “Your Man” has a lot of significance not only for Josh Turner but for the man who wrote it as well, Chris Stapleton. The single was both artist’s first number one and was written by Stapleton along with Chris DuBois and Jace Everett. Not only was it the lead single for Turner’s album, it was the title track as the singer opted to name his entire album after it. “Your Man” was so impressive that it became certified gold and platinum and won Stapleton, DuBois and Everett an award from the American Society of Composers, Authors and Publishers. Stapleton and Turner have quite the working relationship as Turner has recorded some other Stapleton hits including “Lovin’ You on My Mind,” “Deeper Than My Love” and “Another Try,” which features Trisha Yearwood.

Before launching his solo career, Chris Stapleton was best known as a member of the bluegrass country band the Steeldrivers. While the Steeldrivers released “If It Hadn’t Been For Love” in 2008, it was Adele who brought it to popularity when she released it as a bonus track on her sophomore album 21. According to Adele, she was on her tour bus when her bus driver began listening to the song and it instantly grabbed her attention and she immediately wanted to record it. Stapleton admitted that when his manager first contacted to tell him that a YouTube video of Adele’s cover was going viral, he didn’t know who she was. He added that he is “thrilled” by Adele’s version and said he loves her as both an artist and a singer and said he enjoys hearing what other artists do with the songs he writes.

One listen to Alison Krauss and Union Station’s “Miles to Go” and Stapleton fans will instantly here his trademark roots sound with gritty and descriptive lyrics. The song appeared on the group’s 2011 album Paper Airplane and was undoubtedly one of the best songs on there and was written by Chris Stapleton and Union Station’s bassist Barry Bales.

With so many recognizing the quality of Stapleton’s songs early on, Miranda Lambert also gravitated to some of his tracks and recorded “Nobody’s Fool” for her 2011 album Four the Record. Along with singing his song, Lambert and Stapleton have actually sung together a few times with Stapleton providing backing vocals on songs found on Lambert’s 2009 album Revolution, 2011’s Four the Record, and 2014’s Platinum.

Darius Rucker is no stranger to chart-topping hits and he found one of his most iconic with writing help from Chris Stapleton and Casey Beathard. Rucker released the song in 2010 as the lead single of his second country album Charleston, SC 1966 and the song reached number one on Billboard’s US Hot Country Songs chart in 2010. Since Rucker had written with Stapleton and Beathard before, he felt confident in cranking out a good song and said, “It was a pretty smooth writing session in general. I like writing with Casey and Chris. Chris has got those R&B melodies that are always so cool. It was one of those songs that really wasn’t hard to write. We enjoyed it, and it was smooth sailing all the way.”

Back in 2015, Thomas Rhett began really making his name known in the country world with the release of his second studio album Tangled Up. “Crash and Burn” acted as the lead single for the album, and while it is as close to pop as it is to country, fans couldn’t get enough and it’s all thanks to Chris Stapleton who wrote the single along with Jesse Frasure. Of course, it wasn’t the first time that Rhett had found success with Stapleton’s song as he also wrote Rhett’s very first single “Something to Do With My Hands,” off of his debut album.

Blake Shelton has turned quite a few songs into massive hits, and one songwriter he seems to particularly prefer is Chris Stapleton. For Shelton’s fifth studio album Startin’ Fires, which he released in 2008, he included two songs from Stapleton: “100 Miles” and “Never Lovin’ You.” In 2011, Shelton recorded three more Stapleton songs for his 2011 album Red River Blue with “Ready to Roll,” “Sunny in Seattle” and “I’m Sorry.” Additionally, in 2010, Shelton and Miranda Lambert recorded Stapleton’s song “Draggin’ the River.”

George Strait is known as one of the kings of country music, but even he doesn’t come up with all of his own hits. His 2011 single “Love’s Gonna Make It Alright” was written by Chris Stapleton along with Al Anderson, and was released on Strait’s album Here For a Good Time as the second single. It quickly became another hit for Strait as the song raced right to number three on Billboard’s Hot Country Songs chart. “I’ve always thought that whether I’m writing or not, I’ve gotta pick the best songs, whether or not they’re mine. I’m not gonna sing them just because I wrote them. I’ve gotta find the best songs to make the best record I can. I think all of these songs deserve to be on the record,” Strait said of recording Stapleton’s song.

1. Whiskey and You – Tim McGraw

Now that Chris Stapleton released his debut album back in 2015, his fans are well aware of the track “Whiskey and You,” but before Stapleton recorded his own song, he handed it over to none other than Tim McGraw. The popular country star released the song on his 2007 album Let It Go and while Stapleton loved McGraw’s version, he knew he had to have it on his own album eight years later as well. “I always thought it was one of the better songs I had been a part of so I decided to play it out. Over time it became a song that I was rarely allowed to leave the stage without singing. We went through several versions of recording this song until I finally decided it was best to present it in its original form: me, a guitar and one microphone,” he said of his own recording for his album Traveller. 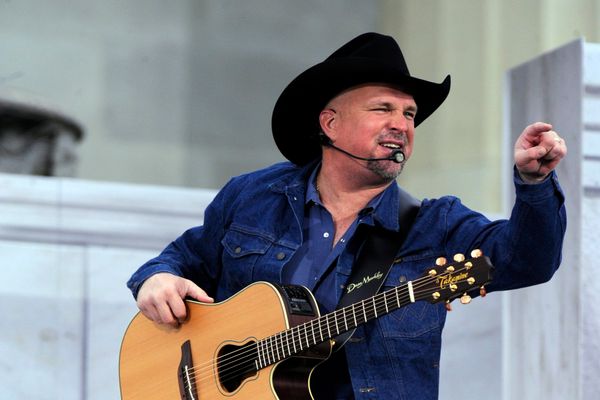 Popular Country Hits That Were Written By Other Stars