A new fall season means an onslaught of new shows ordered by all of the top networks and as always it is up to viewers to decipher which ones are worth the watch. Well, many are willing to bet that Fox has a definite hit in their new show Pitch, as anticipation for the show is well above many others making their fall debut. Here is everything you need to know about Pitch before taking a swing at what is sure to be Fox’s next big hit!

Pitch will finally be making its way to the small-screen with its premiere on Thursday, September 22, at 9 p.m. on Fox. As it turns out, the show has a lot to be thankful for beginning with that particular spot in the the Thursday night lineup on the network. The show wasn’t actually set to premiere until 2017 because they didn’t want to be competing with ABC’s Scandal, but because of Scandal star Kerry Washington’s pregnancy, that show’s premiere was moved to midseason. The move landed Fox with “an opportunity and a time slot to grab viewers looking for a strong-female-led show in the fall.” “The idea of putting it up against a juggernaut with female viewers like Scandal was not appealing to us,” Fox’s chairman Dana Walden stated. It also doesn’t hurt that Pitch is now airing in the month prior to the World Series which is also aired by Fox.

NBC, CBS, Fox, and all the other big name networks have quite a few new shows coming out, but it is safe to say early reviews of Pitch are good enough to not only draw in fans, but make it clear it isn’t going to be one of those shows that fades away. Pitch is getting a lot of positivity from those who have seen the pilot episode. “Pitch has swagger, for good reason. It gets the big things right, the Fox drama about the first female baseball player in the Major Leagues is one of the year’s most assured and exciting debuts. But part of what impresses about the pilot is also the way it confidently strings together so many small but telling details,” Variety stated. Also, out of a ranking of 20 new fall shows, E! Online ranked Pitch number three, saying, “Easily one of the most promising pilots of the fall, I found myself caring about Pitch and I don’t care about sports!”

So, who will be carrying this show into success? Pitch will be led by 27-year-old actress Kylie Bunbury, who will be playing Major League Baseball’s first female player, Ginny Baker. Bunbury only began acting back in 2010, and is now best known from her roles in shows such as Twisted and Under the Dome, but Pitch will without a doubt be her breakout role. Prior to signing on to the role, Bunbury had never even stepped on a baseball diamond, but took it upon herself to master the sport as best as she could. “I had never played baseball before, so I was training about three or four days a week,” she said of her preparation to become Ginny. Thanks to hard work and coaching, the star is now throwing pitches at speeds of 55-60 mph.

Kylie Bunbury seems like the perfect choice for Ginny Baker, but she also has a great supporting cast around her. One of the most exciting cast announcements was Mark-Paul Gosselaar who is playing Baker’s teammate, catcher Mike Lawson, in a performance one reviewer said, “you’ll be hard-pressed to refer to Mark-Paul Gosselaar as the former Saved By the Bell star after this.” Other notable stars include Ali Larter who replaced Elisabeth Shue as Amelia Slater, Dan Lauria as Al Luongo, and Mark Consuelos as Oscar Arguelia, the team’s General Manager and President. Kevin Connolly was also added to the cast as a recurring character, Charlie Graham, the team’s interim president of operations who takes a “cut throat bottom line approach” to baseball.

We know when it airs, and who it stars, but what is Pitch really about? The show follows a young female pitcher, Ginny, who becomes the first ever woman to play in the major leagues for the San Diego Padres. Not only does Ginny have to face the pressure of being the league’s first woman player, but she is also an overnight sensation whose father has set his expectations very high for his daughter. Then of course, she has to battle the views of her own teammates who are worried that she is just being used as a gimmick to fill the seats.

3. Not Just About Baseball

One of the most overwhelming sentiments coming from those who have previewed the show and reacted positively is that you don’t have to know baseball, sports, or even like it to get into Pitch. “It’s a show about a young woman coming of age,” executive producer Dan Fogelman said. “It’s not just about baseball, it’s a show that takes place in the world of baseball.” Another executive producer, Paris Barclay, added, “I think we’re making The West Wing in baseball here. It won’t always be around. There’s a lot more to baseball than that.”

2. The Minds Behind It

Show’s that start off well often have some well known names behind them, and Pitch is definitely no exception. Two of Hollywood’s biggest powerhouses came together to create the show! Dan Fogelman is known from writing hit movies such as Cars, Tangled, and Crazy, Stupid, Love, as well as television series such as The Neighbors and Galavant. Meanwhile Rick Singer is known from producing shows such as Suddenly Susan, My Boys, American Dad! and Younger.

Authenticity in TV often comes in the form of very elaborate sets and sometimes CGI, but not Pitch. Thanks to a partnership between Fox and Major League Baseball, Pitch‘s stars are decked out in Padres uniform and it was even filmed at Dodger Stadium. Fox and MLB have a $12.4 billion TV rights deal partnership, which means that, with no more money exchanging hands, Pitch had access to the teams, stadiums and logos, making the whole premise very realistic. “If we didn’t have MLB, I don’t think we could have done the show because I didn’t want to create fictional teams. That defeats the whole purpose,” Dan Fogelman said. 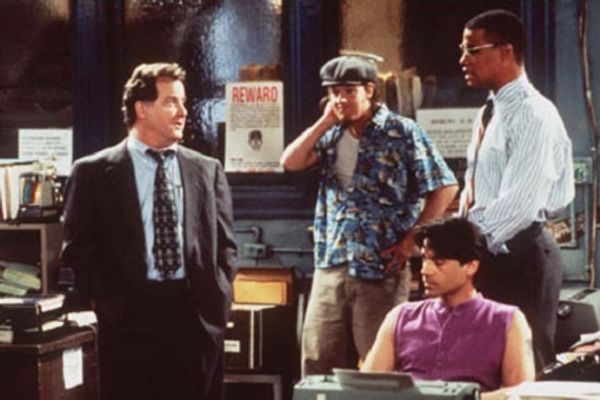