Reality television has been on the rise since the ’90s and early 2000s with shows like Real Housewives, Real World, The Bachelor, Big Brother, and Survivor dominating the industry. Despite its success, reality television is also a breeding ground for controversy and scandal, especially since many of the shows pluck everyday people off the streets and film them working together in a closed environment. In some cases, the cast members become full fledged stars! Many flourish in their new found fame, but others, not so much. Here’s a list of the 15 biggest scandals that have unfolded on reality television:

Phil Robertson from A&E’s Duck Dynasty upset a lot of people and got himself suspended from the show when he gave an interview to GQ and made homophobic comments. He said relationships between two men are a sin and compared homosexuality to beastiality. After he received a lot of backlash, he released this statement: “My mission today is to go forth and tell people about why I follow Christ and also what the bible teaches, and part of that teaching is that women and men are meant to be together. However, I would never treat anyone with disrespect just because they are different from me.” His suspension was lifted after only 9 days.

14. Contestants Fired Over Remarks Made on Big Brother

The long-running CBS show Big Brother is a hot bed for controversy as several strangers are forced to live together and compete against one another. In 2013, during season 15 of the show, several of the cast members came under fire after they were caught making inappropriate racial and homophobic comments. One of the contestants at the time Spencer Clawson was even caught making crude jokes about child pornography and was subjected to a formal investigation before being allowed to return to work. Aaryn Gries and GinaMarie Zimmerman were the two other contestants who were recorded making controversial comments. They both lost their jobs when their employers saw what they had said.

Josh Duggar from 19 Kids and Counting found himself in the midst of two big scandals last summer. One of which occurred when the hacker group known as Anonymous revealed all the users on the Ashley Madison infidelity site and Josh Duggars’ name popped up. At the time, we were all still reeling from the news of his past as a teenager, so the timing couldn’t have been worse. He was also expecting his fourth child with his wife, Anna Duggar. The Christian advocate and executive director of Family Research Council spent a total of almost a thousand dollars for two monthly subscriptions. Disturbing details about his interests in the bedroom were revealed and then two porn stars came forth claiming that they had slept with him. After he was exposed, he released a statement of apology, admitted he cheated on his wife and confessed that he had an addiction to pornography. He checked himself into a “long-term treatment center,” which he has since been released from, but the long-running TLC show was cancelled.

When Jon and Kate Gosselin were starring on “Jon & Kate Plus 8,” they hit a rough patch in their relationship. With increasing levels of fame came rumors of infidelity. While Jon was linked to a number of 20-something women, Kate was allegedly carrying on an affair with her married bodyguard, Steve Neild. Despite being caught on camera getting close with Deanna Hummel, a 23-year-old school teacher, Jon has continued to deny that he was unfaithful, but the proof seems to be in the pictures, in our opinion.

Kim Kardashian’s infamous sex tape is credited with launching her and her family’s careers. Before it was released, the buxom star was best known for appearing alongside Paris Hilton on the red carpet and at various parties. Even though she and her family have vehemently denied having anything to do with leaking the sex tape, the timing is definitely suspect. The sex tape was leaked right before the premiere of the family’s reality TV show, “Keeping Up with the Kardashians.”

In 2012, Real Housewives of Beverly Hills star Russell Armstrong – husband of Taylor Armstrong – committed suicide after allegedly piling up debts of $1.5 million. Before his suicide, he told Rumorflix that he found fame overwhelming and that he blamed it for the breakdown of his marriage. “The pressure of being in the TV spotlight was pretty overwhelming. It took our manageable problems and made them worse,” Russell said.

Three weeks prior to the premiere of her new reality TV show, The Simple Life, Paris Hilton caught the media’s attention when a four-minute sex tape titled “1 Night in Paris” began circulating on the internet. Although she was already a fixture in entertainment news for her party girl lifestyle, the sex tape turned the hotel heiress into a household name. Some entertainment writers believed that the success of “The Simple Life” was perpetuated by all of the publicity Hilton received for her sex tape prior to the show’s premiere.

Farrah Abraham rose to fame by starring on MTV’s hit series 16 & Pregnant and Teen Mom, but now she’s better known for her antics outside her life as a reality star. During a hiatus in filming the show, she became involved in the adult entertainment world. When news of her adult film went public, she pretended like it was a leaked tape and that she had been duped, but it quickly became clear that it was professionally produced and she received a good chunk of money to participate. She’s now fully immersed herself in the adult industry with her own line of adult toys and a live webcam business called Farrah’s Friends. In addition to this, fans have watched Farrah’s appearance change drastically over a short period of time. She has undergone several plastic surgeries including several breast augmentations, rhinoplasty, lip injections and a chin implant.

7. Teresa and Joe Charged with Fraud

In 2014, Real Housewives of New Jersey stars were caught and convicted of 39 counts of fraud including conspiracy to commit mail and wire fraud, conspiracy to defraud lenders, illegally obtaining mortgages and for allegedly hiding assets during a bankruptcy case. Fans of Bravo’s reality series watched the whole thing play out on national television as they continuously denied any fault in the matter, but finally in October 2014, Teresa and Joe were found guilty and sentenced. Joe is currently serving his 41 months in jail while Teresa already completed her 15 months behind bars last year. Joe is also facing a possible deportation back to Italy when his sentence is served.

It’s no secret that Amber Portwood had her struggles while filming the MTV’s Teen Mom 2 series. She was facing legal charges, but little did we know, there was a much bigger problem involving an addiction to prescription pills. The chain of events was set off after Amber and Gary were filmed getting into a physical altercation which led Amber to being charged with assault. There was a lot of speculation about her possibly having a drug problem, but none of it came to light until after she opted to take a 5-year jail sentence in order to force herself to get clean. She went from being a Teen Mom star to a convicted felon. After her sentence she admitted she was high on opiates almost 24/7 while filming and that the addiction began after she appeared on 16 & Pregnant. Amber served 18-months in jail and is now sober. She and Gary co-parent their daughter Leah and both still appear on Teen Mom 2.

Former Real World cast member, Tonya Cooley, appeared on the show’s 11th season in Chicago. When filming wrapped up she filed a suit against MTV Bunim-Murray Productions and her castmates Kenneth Santucci and Evan Starkman and claimed she had been a victim of sexual assault while on the show. According to her, her two male cast members assaulted her with a toothbrush while she was passed out from drinking, and that producers were aware of the incident, but didn’t intervene. The lawsuit was settled outside of court and terms of the settlement were never released.

Some pretty serious allegations were thrown around in 2004 during the season of The Real World: San Diego. A 22-year-old woman claimed she was raped by a friend of cast member Randy Barry. According to her, the man who identified himself as Justin drugged her drink. She reportedly “blacked out and woke up the following morning…in the guest bedroom on the set of MTV’s Real World.” A cast member later came forward and said they had found her naked on the floor in the bathroom and Justin emerged saying, “I just hit that.” Producers cooperated with the San Diego police, but when a lawyer for Bunim-Murray Productions stepped in and refused to let police search the bedrooms, the case was dismissed.

TLC’s beloved reality series known as Here Comes Honey Boo Boo was abruptly canceled in 2014 after only two years on air after it was discovered that Alana “Honey Boo Boo” Thompson’s mother “Mama June” Shannon was dating a convicted child molester, Mark McDaniel. Mama June claimed she was never dating McDaniel, but photos of them together proved otherwise. To make matters worse, it was learned that McDaniel had recently been released from jail after serving a 10-year sentence and June’s eldest daughter, Anna Marie Cardwell, claimed she had been molested by McDaniel when she was 8-years-old, back when they first dated.

The Willis Family was a short lived show that focused on Toby Willis, his wife Brenda and their 12 children. The Willis family rose to fame after they competed on season 9 of America’s Got Talent and were then given their own show on TLC, but it was cancelled after only one season. A few months after its cancellation, the Tennessee Bureau of Investigation launched an investigation on the Christian family and allegedly found that Toby Willis had a sexual encounter with an underage girl in Nashville about 12 years ago. He was arrested a few weeks later and extradited to Tennessee for a pending trial. He faces up to 25 years in prison.

Last summer TLC was hit with one of their biggest scandals ever. An Arkansas police report was unearthed that stated Josh Duggar, one of the children from their hit television show 19 Kids and Counting, was accused of sexually abusing underage girls in 2002 and 2003. The names of his victims were expunged from the report, but it was later discovered that two of the girls were his sisters, Jill and Jessa. A few hours after the police report was leaked, Josh released a statement admitting his fault and assured people he had received adequate counseling as a teenager to understand his wrongdoing. TLC pulled the plug on all the remaining episodes and the show was put on hold. The Duggar family did their best to do damage control on the situation, but the scandal just kept spiraling out of control. Two months later TLC cancelled the show. 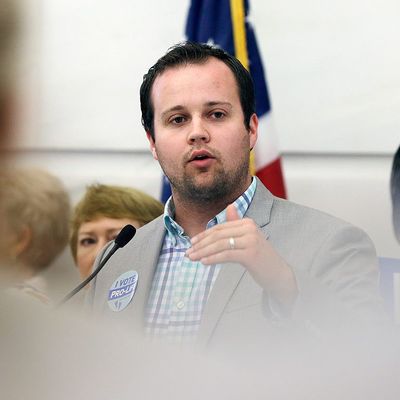