Relatable Ariana Grande Quotes That Will Literally Change Your Life

Pop icon Ariana Grande has had quite the tumultuous year, but she’s proven to the world that she’s stronger than ever regardless. While Grande has battled quite a few traumatic events, it hasn’t stopped her from releasing hit singles and touring around the globe. Grande’s struggles and vulnerabilities shine through in her music, which makes her one of the most relatable popstars of our generation. Follow along as we break down Ariana Grande’s most relatable quotes that will inspire and literally change your life.

14. Ariana on being with a partner

“Only be with somebody if they make you feel like the best version of yourself. You can’t sacrifice yourself for anybody, you know?”

13. Ariana on fitting in

“I don’t feel much pressure to fit in. I never have. I’ve always just wanted to do my thing. I have really good friends and good family, and if I don’t fit in somewhere else, I fit in at home.”

12. Ariana on her favorite form of cardio

“Nothing burns more calories than dancing in 5-inch heels, try it!”

11. Ariana on her love of science fiction

9. Ariana on what her family taught her

“I have to focus and stay on track and do what my family has always told me — know my truth, work hard, be nice to everyone you meet, not fight back and just be a lady.”

8. Ariana on being yourself

“It took me a while to come into my own.. to be unafraid to be myself and to just be unapologetically honest. That’s a brave thing, that’s a dangerous thing.”

“I love boys! They’re great! And they’re perfectly capable of being human and having intellectual conversations. [Feminism] is not boy-bashing at all! So many people have misperceptions of what it is. I love boys, but I love women. It’s about equality. It’s not about being above men, it’s about being equal to men.”

6. Ariana on having a voice

“I want to speak out about the things that upset me and affect me, because otherwise, why do I have this voice? I’m not just an entertainer, I want to make people feel something. I want to remember how I made them feel like they were less alone and I want people to feel empowered.”

5. Ariana on her idols

“I’m a big perfectionist! I’m trying to channel super-confident women like Alicia Keys, Mariah Carey, and Beyonce because I realized that if you want something, you really have to go for it, just like they do.”

“The best fashion advice I’d say would be just to do what makes you comfortable and what makes you feel cute, and that’s how you’re gonna look your best ’cause when you feel your best, everybody else can feel it, too.”

(Photo by Getty Images/Dave Hogan for One Love Manchester)

2. Ariana on speaking up

“I’m willing to take the brunt for fighting in what I believe in and my fellow women are definitely something that I will always be one of the first to speak up about.”

1. Ariana on being challenged

“When you’re handed a challenge, instead of sitting there and complaining about it, why not try to make something beautiful?” 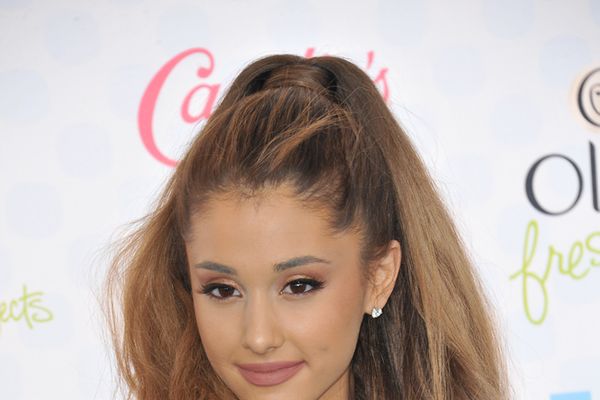