Seinfeld has gone down in history as one of the greatest and most influential sitcoms ever made! It ran on NBC for nine seasons from 1989 to 1998 and was created by Larry David and Jerry Seinfeld, who also starred as a fictional version of himself. The show took place predominantly in his apartment in New York City, and followed Jerry’s life, as well as the lives of his close friends who’ve now become iconic TV characters, George Costanza, Elaine Benes and neighbor Cosmo Kramer. It’s been 20 years since the show ended, so here’s a look back at 10 behind the scenes secrets from the show!

In season 15, episode 8, George has an answering machine message of himself singing to the theme song from “The Greatest American Hero.” The idea came from writer, Jeff Schaffer who knew a girl with a message exactly like that. In their brainstorming meetings the staff would laugh about it all the time. “For two weeks, that’s how we started every kind of brainstorming session — listening to this girl’s message. Then somebody said, ‘We’ve got to do this as a story. We’ve gotta give it to George,'” said writer Spike Feresten. When it went to air, they left a message on the woman’s machine and said, “Watch ‘Seinfield’ tonight!” 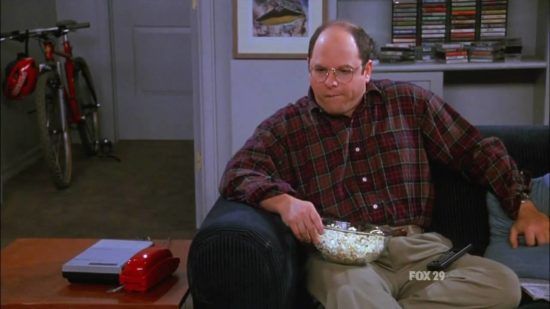 When Julia Louis-Dreyfus became pregnant with her second child in season 8, Seinfeld wanted to find a way to write it into the show. One day he approached her when she was about four months pregnant, and according to Louis-Dreyfus, suggested Elaine just gets fat for that season. Not surprisingly, this upset Louis-Dreyfus a lot! In a round table interview with all the cast members, she said she broke down crying and the idea was immediately scrapped and instead they strategically hid her belly behind boxes or baggy clothes. 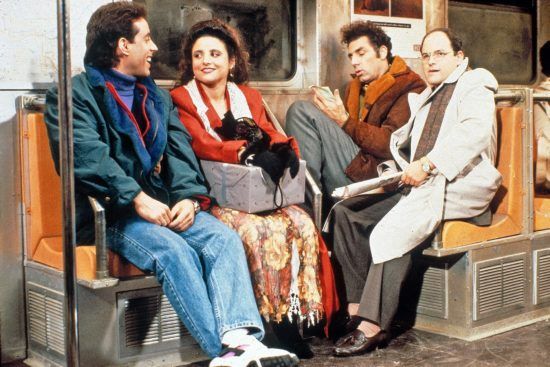 There wasn’t too much drama behind the scenes of Seinfeld, but there was one particular incident with Jason Alexander and creator Larry David in season 3 when Alexander threatened to quit. It was after the episode “The Pen” when Jerry and Elaine go to visit his parents in Florida and Alexander had no role. In an interview with Billy Bush, Alexander admitted he went to David afterwards and said, “If you write me out again, do it permanently.” David tried to explain that it was hard to put each character in equally every week to which Alexander said, “Don’t tell me your problems. If you don’t need me here, I don’t want to be here.” After that he appeared in every episode. 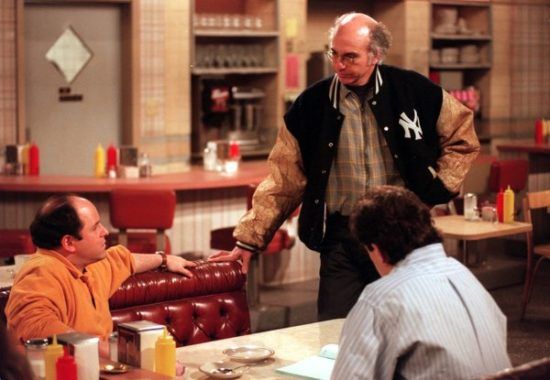 7. The Soup Nazi is Real

The episode titled “The Soup Nazi” was created off a real soup vendor in New York named Ali “Al Yeganeh.” The episode was written by Spike Feresten, and was his first credit on the show. He wrote the episode after sharing the story about this guy nicknamed “The Soup Nazi” with Jerry and Larry, who thought it was hilarious. They encouraged him to write the episode, but not surprisingly it didn’t sit well with Yeganeh. After the eighth season, Jerry and the writers went to get food from the real “Soup Nazi” even after Feresten told them he wasn’t happy about the episode, and according to Feresten, Seinfeld was denied service and berated by the man when he tried to order food! 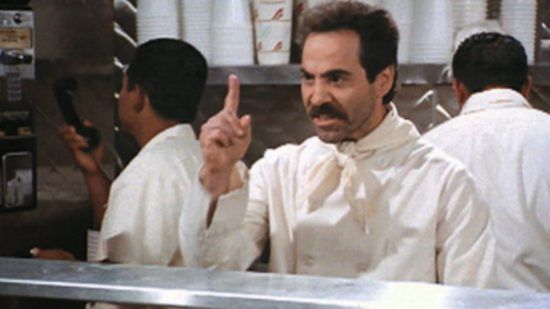 6. Goofing Around on Set

The production team and cast members spent a lot of time on set, and a lot of it was downtime for the writers. In order to kill time, the writers painted a traffic cop vehicle like a fighter plane and drove it through the Gilligan’s Island set! “So we’re all sitting around, and we decided to get like a Cushman [utility vehicle] like what traffic cops have, and we ended up buying it and getting it painted with like a big mouth and evil grin,” said Jeff Schaffer. “The Radford lot used to have the old set of where ‘Gilligan’s Island‘ was, so we would drive it into the Gilligan’s lagoon.” 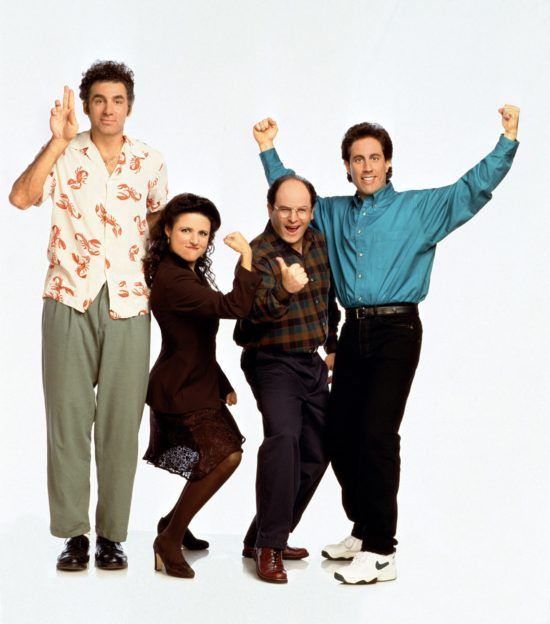 Lawrence Tierney made a cameo on Seinfeld as Elaine’s father, Alton Benes, in the episode titled “The Jacket.” According to Jason Alexander and Julia Louis-Dreyfus, the actor probably would have been asked to come back and play a recurring character on the show had he not scared the heck out of everyone on set. During filming the production team saw Tierney steal a knife from the set of Jerry’s apartment, and when Jerry confronted him about it, Tierney played it off like he was going to play a joke on them by mock-stabbing Seinfeld as he yelled the score from “Psycho.” In an interview with Louis-Dreyfus, she referred to him as a “nut-job” and episode director, Tom Cherones, simply said, “Lawrence Tierney scared me to death.”

The way the episode titled “The Parking Garage” ended was totally unintentional. “The original ending was that we were driving around, and we couldn’t find the exit,” said Julia Louis-Dreyfus. “We were supposed to climb into the car and go. And when we did, Michael [Richards] couldn’t start the car. It actually wouldn’t start. It was like God had actually given us a better ending to the script. We were laughing so damn hard that if you watch that episode back, you can see — I think it’s Jason and me in the back seat, and our heads are bobbing, trying to stop our hysterical laughter, trying to keep it under control while the camera’s running.” 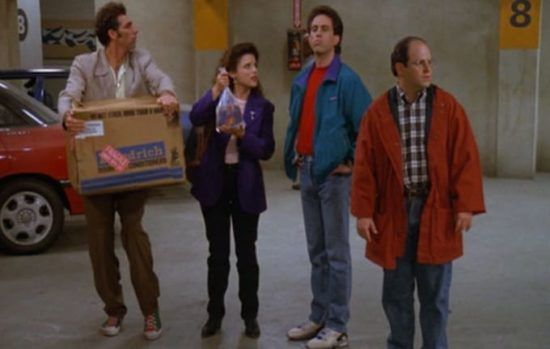 3. Refrain from Clapping for Kramer

Despite being praised by critics in the early seasons, it took a while for Seinfeld to cultivate an audience, but when it did the producers had to ask the studio audiences to refrain from clapping every time Kramer entered a scene! The eruption of applause was ruining the pace of the show. Despite the fact that he was obviously a fan favorite, Michael Richards said in an interview with the Evening Standard that he’d never considered being a “scene-stealer” and that it would have been a “sin” for him to do that. 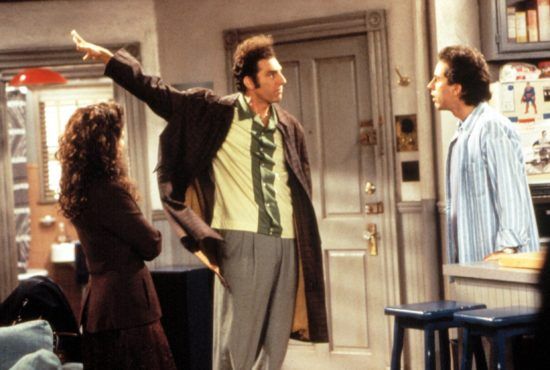 Only die-hard Seinfeld fans would know this, but John Randolph was actually the first actor to play the role of Frank Costanza. He was eventually replaced by Jerry Stiller, who changed up the character. George’s mother, Estelle, was very loud and boisterous, so Jerry Seinfeld wanted him to be a little more subservient to her in order to create this stark contrast and this is how Randolph had played the part. Stiller feared he’d get axed just like Randolph did, so he decided to change things up and during rehearsal he just started yelling back at Estelle and the whole crew loved it, including Larry David! That’s when the character of Frank Costanza was born. 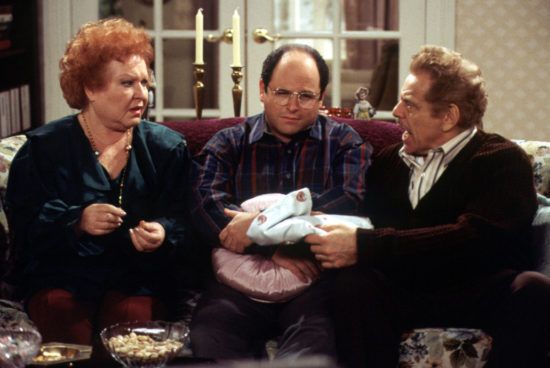 In the premiere episode of season 3 titled “The Note,” Jerry Seinfeld had composer Jonathan Wolff add scat-like female vocals and lyrics over the now-iconic opening theme song. When the project was finished, they all loved it, including Larry David, so they went ahead and did it on two more episodes. When the first episode went to air, they realized they’d forgot to run it by anyone other than themselves. Then they got angry phone calls from execs at the production company and their bosses at Castle Rock Entertainment! The jazzy lyrics were subsequently edited out of the following two episodes, but the “The Note” remains to be the only episode with feature lyrics over the Seinfeld theme song. 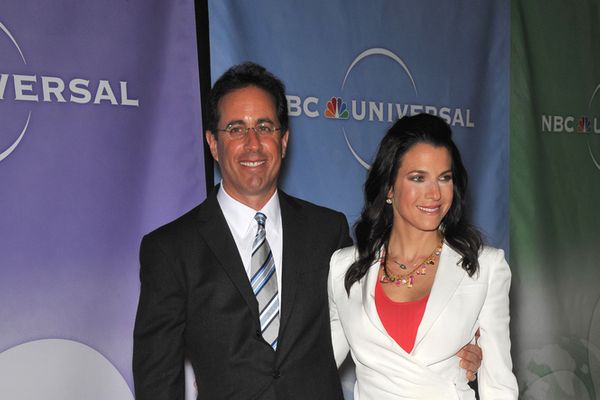