Can you believe it’s been over 10 years since Veronica Mars first premiered on TV? The clever teen detective neo-noir, which garnered lackluster ratings but became a cult hit afterward (especially once it was available to stream on Netflix), launched on September 22, 2004, and aired for two seasons on UPN and one season on The CW (which was formed from UPN and The WB). After a highly visible fan crowdfunding campaign, it was even spun off into a movie that hit select theaters and the internet in 2014. It’s hard not to be obsessed with sassy, smart Veronica, her love interests Logan and Duncan, her best friends Wallace and Mac, her lovable dad Keith and the rest of the goofy characters that populated the fictional Southern California town of Neptune. But which episodes were the most memorable? It’s hard to pick, but here are the ten episodes that have stuck with us the most:

The very first episode of Veronica Mars is one of its best, perhaps because it was just so different from everything else on TV. It introduces us to the clever, complicated heroine (played by Kristen Bell) and the world of Neptune, a backdrop which allows for discussions of class and income disparity. We also learn that Veronica is trying to solve the mystery of who raped her at a party, a mystery that is a serialized arc for the whole first season. Although there is a lot of voiceover narration in the pilot, this also establishes the tone of the show, which was heavily influenced by retro noir crime stories. We also see flashbacks, a style that helps us get to know Veronica’s late best friend, Lilly (Amanda Seyfried). Fun fact: the opening sequence that originally aired is different from the one creator Rob Thomas wanted; the network wanted to show Veronica arriving at school so that viewers would understand that it was a high school show. But the opening you’ll see on DVD or on online streaming is the one that Rob intended.

The episodic plot of Return of the Kane focuses on Wanda, a girl Veronica helps to beat Duncan in the school elections (despite Veronica’s romantic history with Duncan). But it’s a memorable episode mostly because of what we learn about Logan: in one of the darker scenes of the show, America’s 1972 classic “Ventura Highway” plays as Logan (played by Jason Dohring) brings a belt to his abusive father, movie star Aaron Echolls, who closes the door and beats his son. It’s an absolutely haunting scene that will never let you hear the song the same way; it also makes you see the brooding Logan in a whole new light.

We had to give some love to Weevil (played by Francis Capra), who’s one of the most lovable and underrated characters on Veronica Mars. It’s so rare to see a male-female relationship on TV that isn’t about sex or at least unrequited love, and Veronica had that with both Wallace and Weevil. Weevil was someone who always had Veronica’s back and helped her out with her investigations when he could. But he had a softer side, too: he was in love with Lilly Kane. In “The Wrath of Con,” we see just how much Lilly meant to everyone when the school holds a memorial and shows an emotional video that Logan made. After seeing the video, Weevil cries. Because of the nature of his relationship with Lilly, he’s not able to publicly grieve the way Logan can — and our heart breaks for him.

Sometimes people forget about season three of Veronica Mars, which includes a lot of dark storylines about rape and sex tapes —  but it also let us get to know the adorable Piz (played by Chris Lowell), and it humanizes Dick Casablancas (Ryan Hansen). Season three also contains plenty of heartbreaking Logan-Veronica moments, since Logan spends a lot of the season dating Parker. In Un-American Graffiti, Keith Mars solves a case that leads him to discover that Veronica has been providing her friends with fake IDs, and Dick has a silly storyline about picking up girls on MySpace (oh right, that used to be a thing!) — but what’s most memorable is the birthday party that Logan throws for Parker at his fancy loft. In a classic star-crossed-lovers moment, Veronica and Piz kiss in front of the elevator. Just as it opens, Logan can be seen standing alone inside. The elevator dings, interrupting Veronica and Piz, who turn to see the jealous, abandoned expression that betrays Logan’s true feelings. He forces a smile as he gets out of the elevator and brushes past Veronica, who gets in with Piz. It’s one of the best Veronica Mars elevator scenes, an important moment for Veronica-Piz fans as well as Veronica-Logan fans. If it doesn’t tug at your heart strings, I don’t know what will!

Most Veronica Mars fans root for Veronica and Logan to be together (and we understand why), but you can’t forget about Leo, the handsome, sweet cop who is a brief love interest. One Veronica Mars episode is called “Like A Virgin,” but the show’s most memorable Madonna reference takes place in Ruskie Business, when Veronica dresses up like an early, Like a Prayer-version of the pop icon with big hair and black lace for a school dance — a school dance that Leo takes her to, even though he’s too old for such things. Leo tells her she looks beautiful and they later kiss. Perhaps Leo was a little too good and nice for Veronica; that’s what makes their relationship so heartbreaking. Logan, of course, ruins it by being obnoxiously drunk at the dance.

Many Veronica Mars fans are also shippers of Logan and Veronica, making season 1’s “Weapons of Class Destruction” important, since it features the couple’s first kiss. Logan, in his constant quest to protect Veronica from danger, beats up a man she is tracking (who turns out be an undercover cop). Afterward, Veronica gives him a quick kiss on the lips — and after some intense eye contact, she turns to walk away, but he pulls her back, giving her a long, passionate kiss as the song “A Momentary Thing” by the Irish band Something Happens plays on the soundtrack. Did you squeal at your TV during this moment? Because we definitely did.

One of the reasons that fans clamored for a Veronica Mars movie is that the series left us on a huge romantic cliffhanger — does Veronica end up with Piz or Logan? In this episode, Piz makes clear to Veronica that he was not responsible for the recording or dissemination of their sex tape. Later, Logan apologizes to Veronica for beating up Piz (always trying to defend her honor, that Logan) — but she says it’s going to take her a while to forgive him. Piz sees Logan and Veronica talking and doesn’t like it; Veronica knows there is still something between Logan and her, which is why she gives Piz a guilty look. AND THAT’S BASICALLY IT — we know Piz is a good guy who’s innocent in sex-tape-gate, and we know Veronica is hesitant about Logan, but still has feelings for him. At the end of the episode, Veronica casts her ballot for her father, who’s running for his old post of Sheriff of Neptune — but we don’t get to see her choose Piz or Logan. Some TV creators say that it can be better to end on a cliffhanger and not resolve things, because then it makes it harder for the network to cancel you, because they know fans will be upset by the lack of resolution — but Veronica Mars was always on the brink of cancellation, and the show did indeed get cancelled after season 3. There was talk of a fourth season in which Veronica goes to the FBI academy (you can see a trailer online), but it never came to fruition. Instead, the movie answered the long-standing romantic question: at the beginning of the movie, Veronica is in New York and is in a relationship with Piz. But by the end, she moves back to Neptune and rekindles things with Logan, the guy she’ll never be able to shake.

One thing you can’t deny about Veronica Mars is that the show really knew how to do bad-ass season finales. In “Not Pictured,” the finale of season two of the show, we learn that the person behind the infamous bus crash (the ongoing mystery of the season) is Dick’s brother Cassidy “Beaver” Casablancas (played by Kyle Gallner). Beaver also reveals that it was he, not Duncan, who raped Veronica the night of Shelly Pomeroy’s party, giving her chlamydia in the process. (He got it from Woody Goodman, a powerful local businessman who molested him). The intensity of the episode mounts as Beaver is about to detonate a bomb and blow up a plane that both Woody and Keith are on. We even see him push a button followed by a flash in the air — and at that moment, Veronica thinks that her beloved father is dead. But in the end, we learn that Keith never got on the plane because of a business proposal he made with Kendall.

Fans of TV know that penultimate episodes can be very compelling and important, and the second-last episode of Veronica Mars season one is no exception. In A Trip to the Dentist, Veronica finally solves the mystery of Shelly Pomeroy’s party, learning that she was given a roofie-laced drink by Madison Sinclair (played by Amanda Noret), an action she calls “a trip to the dentist.” Madison was upset at Veronica because she saw her making out with Madison’s boyfriend, Dick Casablancas (Ryan Hansen), but Veronica can’t remember anything because of the drugs. Veronica also finds out from Carrie Bishop (played by Leighton Meester, in her pre-Gossip Girl fame) that people saw her having sex with Duncan, but it was consensual, and they were both drugged; Logan had drugged Duncan, not knowing what would happen between him and Veronica. But the most memorable scene of the episode, at least for this writer, is when Duncan reveals a big secret: he regrets having sex with her. “Because you’re my sister and I knew it!” he says emotionally. Yep, Veronica’s mom had an affair with Duncan’s dad, so they might be half-siblings (something we later find out isn’t true).

Remember what we said about amazing finales? In the finale of season 1 (which many fans think is the best season of the show), we finally find out who murdered Lilly: Logan’s father, Aaron Echolls, who was having an affair with the teen girl even as she was dating his son. But that’s not the only big thing that happens in Leave it to Beaver: Veronica also learns that Keith is her biological father, meaning that Duncan is not her half-brother. Oh, and Logan gets arrested, because it’s Logan. What’s most intense about the finale, though, is when Aaron attacks Veronica because she’s solved the mystery of Lilly’s murder. He traps her in a fridge and LIGHTS IT ON FIRE as her father arrives to save her. Deep down we knew that the writers wouldn’t kill off Veronica Mars on a show called Veronica Mars, but it’s the most danger that she’s ever in — and it’s terrifying. 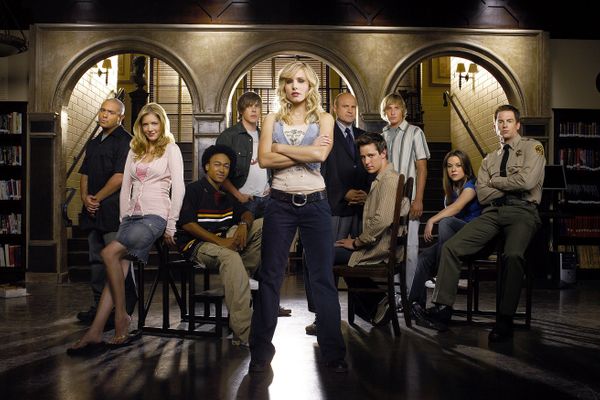