Things You Didn’t Know About The Irwin Family

Steve Irwin otherwise known as The Crocodile Hunter was one of the most popular celebrities of his time. He was charismatic, caring, down-to-earth and endlessly interesting, and while his untimely death shocked and saddened millions, his family has carried on his legacy. His wife Terri, along with their two children Bindi and Robert, have become just as inspiring and proactive when it comes to conservation and educating others on nature and wildlife . It is really hard not to like the entire Irwin family, and as Robert and Bindi get older and help expand their dad’s legacy, here are 12 things you didn’t know about the impressive family:

Terri Raines was born in Oregon where her parents instilled in her a love for animals and their well-being at a very young age. By her early 20’s Terri was helping to run her family’s construction business while also working at a nearby emergency veterinary hospital and operating a wildlife rehabilitation program called Cougar Country. It isn’t surprising to see why Terri and Steve bonded so quickly once they met — their love for animals grew into their love for each other! 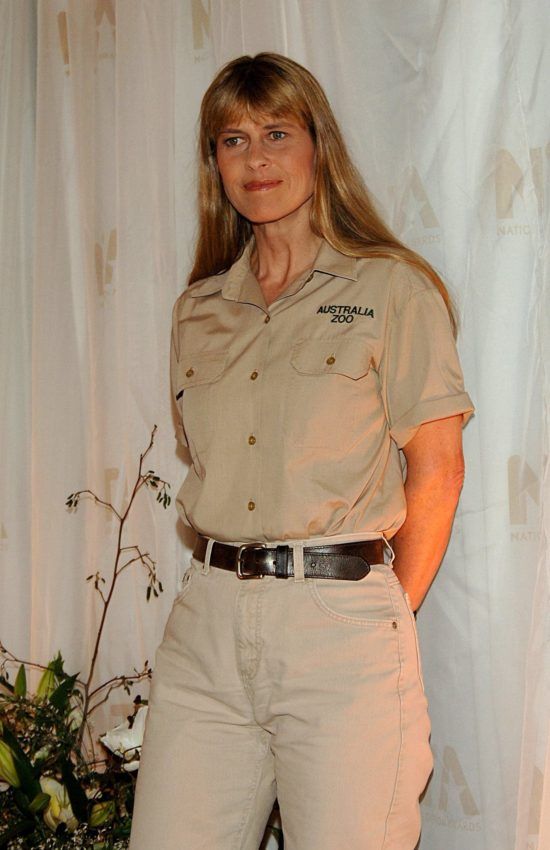 Both Terri and Steve Irwin described their romance as “love at first sight,” and even though he was living in Australia and she was in Oregon it didn’t stop their love from blossoming. The pair first met in 1991 when Terri visited the Queensland Reptile and Fauna Park in Australia which Steve helped run with his parents, and she was immediately interested in him. “I thought there was no one like this anywhere in the world. He sounded like an environmental Tarzan, a larger-than-life superhero guy,” she said of her first impression of Steve. Through a long distance romance, only four months later the duo became engaged and on June 4, 1992, only six months after they first met, they tied the knot in Terri’s hometown of Eugene, Oregon before she packed up her life to move to Australia with Steve. The couple welcomed their first daughter, Bindi Sue Irwin on July 24, 1998, naming her after Steve’s favorite crocodile at the zoo, Bindi, and a beloved family dog, named Sui. In December 2003 the couple welcomed their second child, son Robert Clarence named after Steve’s father. 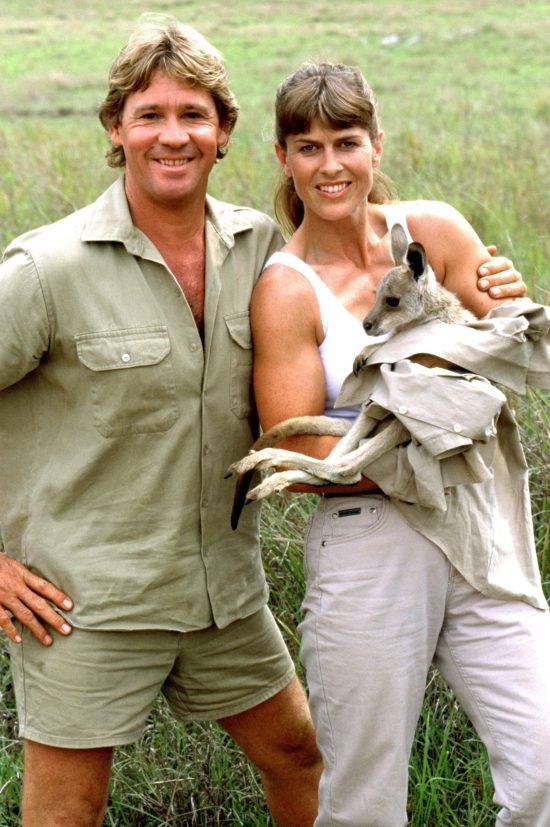 Back in the ’70s, Steve Irwin’s parents Lyn and Bob Irwin moved their family to Queensland, Australia where they started the two acre Queensland Reptile and Fauna Park. The Park is where Steve’s father educated him on the wildlife and reptiles and in 1998, Steve’s parents retired, leaving the park to Steve and Terri who renamed it to the Australia Zoo in 1998. Thanks to Steve’s success as The Crocodile Hunter, his many Animal Planet and Discovery series generated a lot more interest and funds in the zoo and now it spans nearly 1500 acres and employs over 500 people. 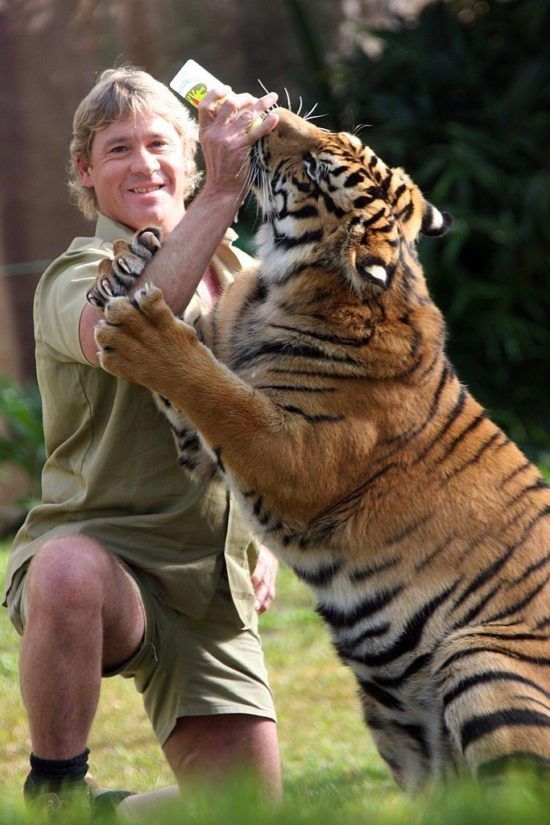 While Steve Irwin brought knowledge and awareness to many through his many television series, his most passionate work was first and foremost in conservation and promoting environmentalism. “I consider myself a wildlife warrior. My mission is to save the world’s endangered species,” he once said, adding that he bought large plots of land in areas of Australia, Vanuatu, Fiji and the United States to use as protected parks. One of his biggest efforts was founding the Steve Irwin Conservation Foundation which is now known as Wildlife Warriors Worldwide which has been carried on by his family. The WWW has since launched 10 conservation projects in hopes of creating a world “where people and wildlife can live harmoniously alongside one another.” “Dad was amazing because he left this legacy that people will never forget. He didn’t just say to love the cute and cuddly animals — he tried to get people to understand and respect the animals like crocodiles and snakes and really break down those barriers,” Bindi said. “For us, we really want to carry on in dad’s footsteps and make sure that everything he worked so hard for continues on in the future.” 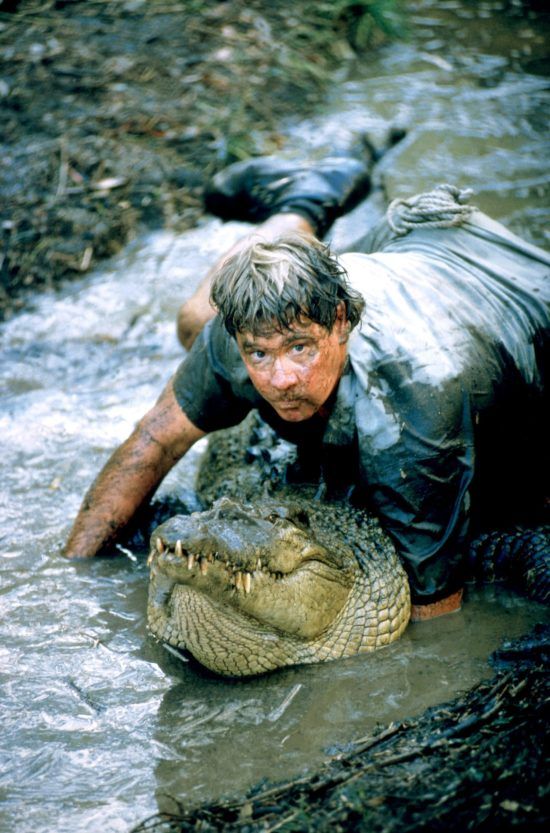 8. Bindi Can Dance and Sing

There is no doubt that the Irwin family is extraordinary and from a young age Bindi Irwin has been living a very different life than most children, but her talents exceed being an expert in nature and wildlife. In 2015, Bindi competed on season 21 of the popular dancing competition series Dancing With the Stars. She ended up charming everyone and proving her work ethic can apply to anything as she and her pro partner Derek Hough went on to win the season and at only 17 became one of the youngest winners of the show! While many discovered she certainly can dance thanks to Dancing With the Stars, many don’t know that she can also sing. In 2006 she released her debut album Bindi Kid Fitness with Steve Irwin and The Crocmen and in 2007 released her second album Trouble In The Jungle. From 2006 to 2016 she released five albums! 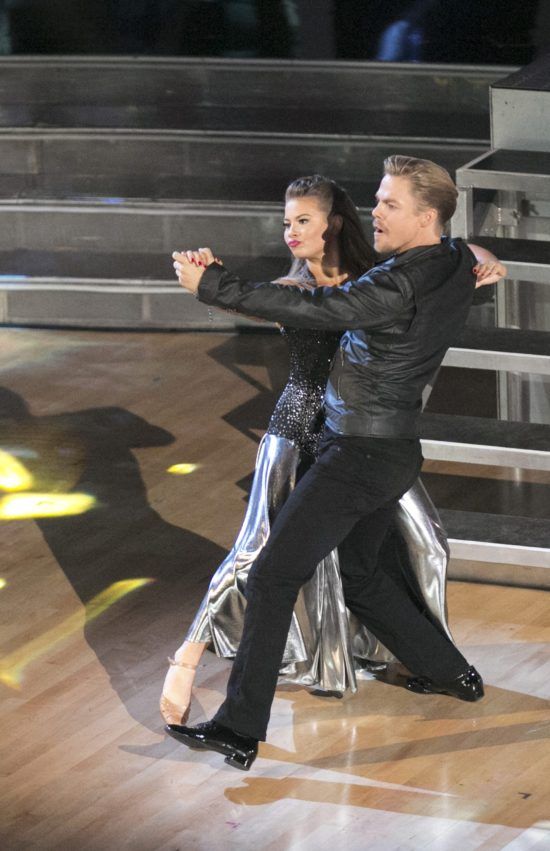 What many don’t realize about the Irwin family and their dedication to their wildlife conservation efforts which is of course centered at The Australia Zoo, is that the zoo is their home. Unsurprisingly, both Bindi and Robert Irwin were homeschooled with tutors at the zoo who traveled with them during their many international trips to ensure they kept up with their education. “If he was in regular school he would be the bored and naughty kid. His reading ability is Year 7 but he is doing Year 5 work, three years ahead of regular schooling,” Terri Irwin once said of the decision to homeschool Robert. “Steve was always telling us how he wagged school to go and catch red bellied black snakes but he still did well at school.” Bindi was also homeschooled until 2014 when she completed her high school education after which she enrolled at TAFE Queensland East Coast and has since completed a Certificate III in business and a Certificate III in tourism. As for having a much different home and school life than most other kids, Robert Irwin said, “I actually grew up at Australia Zoo, so I think I’m the luckiest kid on planet Earth.” 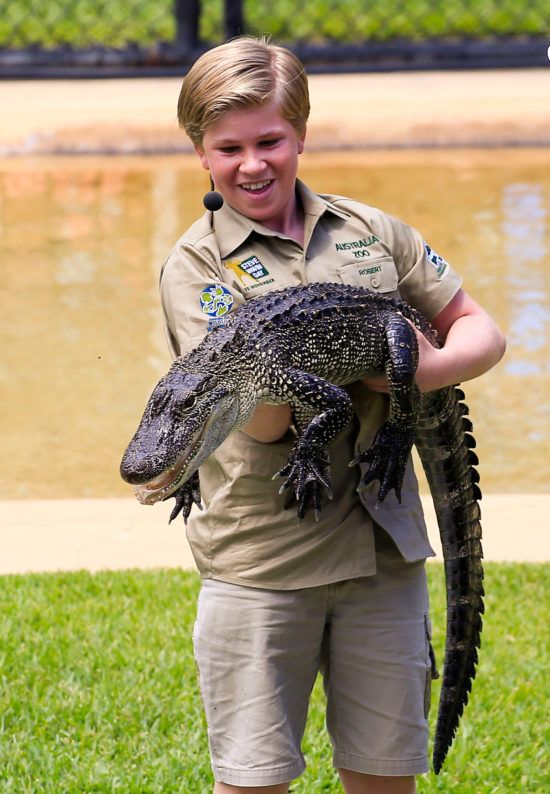 As the older sibling, most of the attention since Steve Irwin’s passing has been on Bindi Irwin, but in recent years Robert has stolen the show as he has proven he has the same charisma, kindness, enthusiasm and knowledge that made his father so endearing to millions. On February 16, 2017, the then 13-year-old made his very first solo appearance on The Tonight Show with Jimmy Fallon, becoming one of the show’s most popular guests yet! His appearance went so well that only a few months later, Fallon asked Robert to return and, again, viewers couldn’t get enough resulting in Robert’s clips being some of the most shared and liked on social media for the show. “My dad was on The Tonight Show quite awhile ago. So it’s really nice to be able to follow in his footsteps,” Robert told Fallon. “It’s really great.” Irwin’s popularity led him to numerous other Tonight Show appearances in only a matter of months.

The entire Irwin family have been bestowed some pretty incredible honors over the years. For Steve Irwin, some of his biggest honors were having two animals (a new species of turtle and a new land snail) named after him, being awarded the Centenary Medal for his “service to global conservation and Australian tourism,” and in 2004 he was named Queensland Australian of the Year. In 2006, Terri Irwin was named an Honorary Member in the General Division of the Order of Australia for her ‘outstanding dedication to wildlife conservation and the tourism industry’. She was also the winner of the 2006 Ernst & Young Northern Region Social Entrepreneur of the Year and 2007 Queensland Telstra Business Women’s Award. In 2015 Terri won the Award for Excellence in Women’s Leadership in Queensland and received an honorary Doctor of Science degree from The University of Queensland in recognition of her outstanding contributions to conservation and environmental management efforts. While she is only 20 years old Bindi Irwin has received three Nickelodeon Kids Choice Awards, an Emmy, and in 2014, Bindi was awarded the prestigious Australian Geographic Society’s Young Conservationist of the Year which she dedicated to her father. Robert Irwin has also been awarded a Nickelodeon Kids Choice Award, was runner-up in the juniors category for the 2016 Australian Geographic Nature Photographer of the Year competition, and he has been invested as a member and ambassador of Scouts Australia. 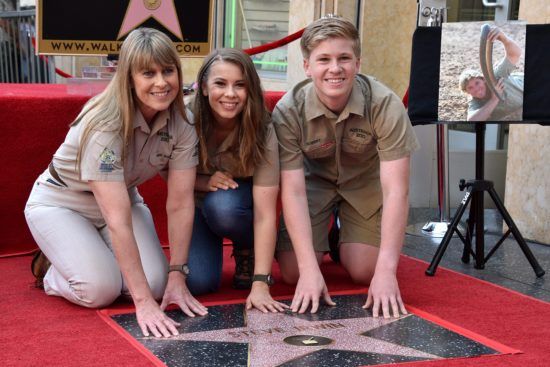 There is no doubt that Steve Irwin’s family has honored him in the best way possible by carrying on his legacy in conservation work and with the Australia Zoo, but Terri Irwin has admitted carrying on in her personal life hasn’t always been easy, especially because his death in 2006 was so unexpected. “No matter the circumstances are that you lose someone, nobody’s truly prepared,” Terri explained. “Steve’s accident was so unexpected, it was extremely challenging.” She has also revealed that losing the love of her life so early and unexpectedly has made her not want to look for love again. “I think it’s wonderful when people who have lost someone find love again, but I’m not personally looking, and I haven’t been on a date in 27 years,” she revealed. “In fact, it’s been so long, I’ve had a couple of lovely women ask me out because they figured that’s the case. But I’m content. I have two beautiful kids, a really full plate. I’ve already had my happily ever after.” Following Steve’s death, Terri revealed she began a tradition with Bindi and Robert to help them move on with each new day without him. “We’d each say our favorite part of the day, what we were most looking forward to tomorrow and a good deed we did that day,” Terri revealed. “You can’t focus on yourself. You need to focus on what you’re doing for others and then you can start to heal.”

Aside from helping at the Australia Zoo, keeping up with school, and traveling the world, at only 10 years old Robert Irwin added to his already impressive list of accomplishments with the release of his book series Dinosaur Hunter with co-authors Lachlan Creag and Jack Wells. Not only did Robert co-author the series, he also completed the illustrations for the series! 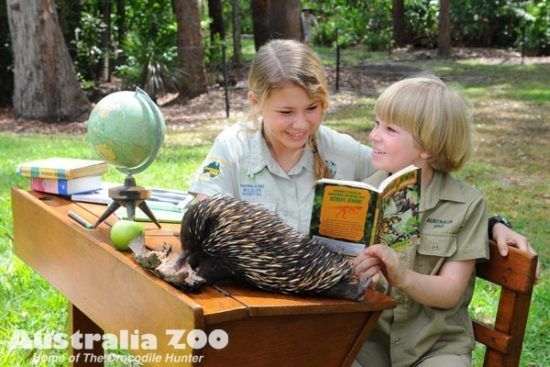 The Crocodile Hunter‘s life and death had an unprecedented effect on many people, and after dedicating his life to nature conservation, ten years after his death Australia officially announced there would be a Steve Irwin Day. Beginning in 2016, November 15 is recognized as Steve Irwin Day, chosen in part because it is the birthday of one of the Australia Zoo’s longest residents, a Galapagos tortoise named Harriet who lived to be 175. Terri Irwin said the date was chosen “in honor of their special relationship and make sure Steve Irwin Day is all about wildlife and wild places.” For the day the Irwin family also encourages visitors to the zoo and fans worldwide to wear khaki in support and remembrance.

Along with following in Steve’s footsteps when it comes to nature and animal conservation, the whole family is following in his television footsteps as well! The Irwins are returning to TV in the fall of 2018 with an all-new series on Animal Planet under the working title The Irwin Family. “Steve Irwin was a champion for all wildlife and he and Terri’s excitement and enthusiasm brought viewers from around the world in touch with nature,” said Patrice Andrews, General Manager of Animal Planet, in a statement. “Their passion for animals, love for their family, and leadership in conversation awareness left a strong legacy that continues today. We are thrilled to have Terri, Bindi and Robert back in the Animal Planet family.” Terri Irwin added, “We’re excited to be returning home to Animal Planet and our Discovery Communications family. We look forward to the year ahead as we embark on new projects and adventures with Animal Planet.” 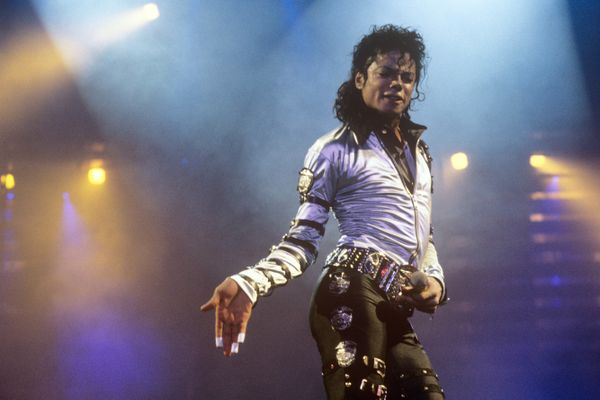