The barrage of Nobodys turned Somebodys in Hollywood is fuelled by the celebrity status granted to reality TV “stars.” And while we like to see them pick cat-fights and create drama on their series,’ we can’t help but just want them to go away when it’s all said and done. The escape from the limelight is not often undertaken by choice, and the desperate cling to fame is too much for some people. This countdown exposes the reality TV “stars” who have force-fed us more even after we were finished.

Model and recording artist, Amber Rose, is best known for her role as Kayne West’s girlfriend in the pre-Kardashian days. She’s tried to make a name for herself by starring in cameo roles in music videos and being a guest judge on RuPaul’s Drag Race. She also landed herself another rapper, Wiz Khalifa, although the two divorced after one year of marriage. With such an extensive resume, the world is her oyster…

Kevin Federline was a backup dancer, but became famous for marrying Britney Spears in 2004. The couple were given a reality show, Britney & Kevin: Chaotic, in 2005, but the show only aired for five episodes. The pair ended their marriage in 2007, and after Britney’s public breakdown, KFed received custody of their children and packed on the pounds. He milked the weight gain by appearing on season seven of Celebrity Fit Club in 2010.

This British-born restauranteur used her wealth to land herself a spin-off of The Real Housewives of Beverly Hills, Vanderpump Rules. She also did another stint on reality TV appearing on Dancing with the Stars. I think her real claim-to-fame though, was her breakthrough role on Baywatch Nights. Back in 1995, she appeared in episode one, titled “Just a Gigolo.”

This professional victim rose to fame when husband, Eddie Cibrian, cheated on her with LeAnn Rimes, who was also charmingly married at the time. The drama landed her the Real Housewives of Beverly Hills gig on which she aired her dirty laundry and dissed the “home-wrecking” LeAnn and her ex-hubby Cibrian. She’s also channeled her anger productively in Twitter rants about the pair, and in her aptly named memoir, “Drinking and Tweeting: And Other Brandi Blunders.”

As an original cast member of The Real Housewives of Atlanta, Zolciak rose to fame for her never-ending spats with fellow co-star, NeNe Leakes. Zolciak received her own Bravo spin-off series, Don’t Be Tardy and left the desperate housewives behind in the middle of season five, to chronicle her wedding to football player, Kroy Biermann. Her release of the song “Tardy for the Party” wreaked havoc on her former cast members, and Kandi Burruss along with collaborating songwriter/ producer, filed suit against Zolciak for the profits earned from the sale of the single. Zolciak is set to star on the 21st season of Dancing with the Stars, and on another spin-off series, NeNe and Kim: The Road to Riches.

Ray J’s original claim to fame was for being a famous person’s sibling — he’s Brandy’s little brother. His true potential was exposed however, when he starred alongside Kim Kardashian in her infamous sex tape. This little leak was enough to land Ray J his own reality dating show on VH1, but despite the opportunity, true love never blossomed. In an attempt to remain relevant, he started dating Whitney Houston, and reportedly pitched a reality show showcasing their relationship, shortly before she died. He hosts Bad Girls All-Star Battle on Oxygen, the fourth spin-off of Bad Girls Club. Talk about living the dream!

This little ball of energy was the most popular person on Myspace and this gained her magazine covers, a shoot with Playboy, and her own bi-sexual dating show on MTV, A Shot at Love with Tila Tequila. She has since authored a book, and leaked a sex tape, but after a near-death experience and a stint in rehab, she’s dropped off the map. She is planning her heroic return to the limelight and is set to film a movie alongside Hulk Hogan’s son. Sounds riveting!

This infamous duo makes a lot of lists, but their preoccupation with their own self-importance, makes them a must for this countdown. Heidi Montag and Spencer Pratt became known for their roles on The Hills, but after the series ended, these two glossed the pages of the tabloids until we couldn’t stand it anymore. Heidi’s music career was a total bust, so the two tried their hand at writing, publishing a book called, “How to be Famous: Our Guide to Looking the Part, Playing the Press, and Becoming a Tabloid Fixture.” Nothing seemed to be working despite the talent of Speidi, so they decided to stage a divorce. Still, no one cared, and these two slipped into utter obscurity. What a waste of talent…

No one is a Rebecca Black wannabe, except maybe Courtney Stodden. This talentless hack came to fame in her unconventional marriage to actor Doug Hutchinson. The two made headlines when 51-year-old Hutchinson married 16-year-old Stodden in Vegas with her mother’s consent. The couple were criticized for their relationship being a publicity stunt, but if it is, it hasn’t worked. Stodden has released a series of failed singles, and the couple has appeared on several reality shows to many viewer’s disgust. Despite the release of a sex-tape-for-charity, it’s Stodden’s recent battles against her “momager” that have seemed to create the most buzz for her. After being dropped as Courtney’s manager, her mother, Krista Keller, has expressed regret over letting her daughter marry Doug, speculating that he may be controlling some of her decisions. Umm…yeah…we could have told you that.

Nicole “Snooki” Polizzi was scouted and cast as a member of Jersey Shore because of her train-wreck appeal. After getting punched in the face by a New York City school teacher, Brad Ferro, Snooki’s appearance fees increased from $2,000 per event to $10,000 per event. So basically, she became famous for getting punched in the face. After Jersey Shore, Snooki was given a spin-off with her BFF, Jenni “Jwoww” Farley, Snooki & Jwowwi. Before the spin-off could premiere, Snooki announced that she was pregnant, and as the series unfolds, Jwoww also becomes a mom. Snooki has recently had to take to her podcast, Naturally Nicole, to defend her husband in the Ashley Madison scandal, saying that he wouldn’t ruin his family or pay money to cheat, and that she’s not wearing her wedding ring because it falls off. The drama never ceases, and someone should tell Snooki about this secret new technology called ring sizing.

After exploiting her children to come to fame in Kate Plus 8, this reality TV show mother-of-the-year has appeared on additional reality shows including Dancing with the Stars, Celebrity Apprentice, oh, and my favorite, Celebrity Wife Swap. And she has become a published author with such Nobel prize-level works as Multiple Blessings, Eight Little Faces, I Just Want You to Know, and Love is in the Mix. To much dismay, these books landed on the New York Times bestseller list. In 2015, TLC relaunched Kate Plus 8 even though it had been cancelled in 2011. With the recent number of TLC show scandals, it is clear that the network was desperate in hiring back this whiny, money-hungry mom.

This fiery diva of the Real Housewives of New Jersey has continued sinking to all-time lows to cling to her fading limelight. She is infamous for her tirades and insults to…well…everyone, but this mother of four takes the cake by exploiting her most recent endeavor, prison. The reality star is serving a 15 month sentence for fraud, while her four daughters and her husband film a Bravo special about life without mom. Teresa is also making extra efforts to document her time in prison, so that it can be relayed accurately in her upcoming memoir set for release in December. Her husband Joe will serve a 41-month sentence upon Teresa’s release. Yay, another business opportunity!

Kris Jenner’s rise to fame was not an easy climb. It required divorcing a famous lawyer for a famous athlete, and riding the coattails of her daughter’s sex tape all the way to her own reality TV show. Luckily, Kris has many other daughters and her moment in the spotlight will be able to shine on.

What can be said about the ceaseless talents of Paris Hilton? Not much, that’s for sure. The girl became famous for a pathetic attempt at a sex tape, which would prove to inspire other fringe “artists” and create an industry centered around shameless self-promotion. Paris was then given her own reality TV show, The Simple Life, and roles, mostly playing herself, in movies. She also made an attempt at breaking into the music industry, but despite these accomplishments, Paris is basically famous for being Paris, and giving tabloid media something to talk about.

Having a baby at 16 years-old, launched Farrah’s celebrity career as Teen Mom. After her stint on the show, her clutch on the limelight could not be loosened, and she released a memoir, My Teenage Dream Ended, about her struggles as a drug-addicted, depressed teen mother, that eventually became a New York Times bestseller (really?!). She then went on to write a children’s book, made a horrific attempt at a dance-club single, “Finally Getting up From Rock Bottom” (maybe not quite there yet), oh, and released a “sex tape” which launched her ventures into her own line of sex toys. If there was anything to be learned from Kim Kardashian and Paris Hilton’s careers, it’s that you release the sex tape to get a reality show…not the other way around! Duh! 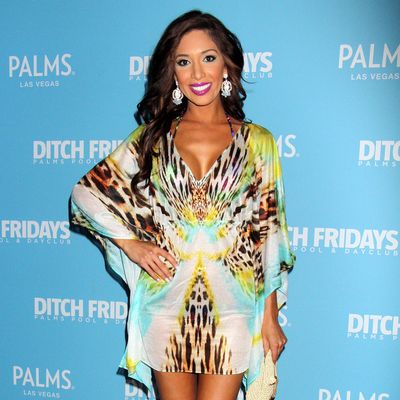