The clever sarcasm and witty banter of Gilmore Girls differentiated it from any other television show in the same genre. Lorelai Gilmore, in particular, became known for her signature dialogue full of stinging comebacks and quick remarks that kept us laughing in hysterics throughout every episode. Her atypical parenting techniques, constant bickering with her mother, passion for junk food and coffee addiction created a character that was super relatable and the best friend (or mother) any girl could wish for. Follow along for 10 of Lorelai Gilmore’s most iconic quotes from the seven season run of Gilmore Girls:

The show wouldn’t have been as iconic as it is without the Gilmore’s infamous love of junk food. Loralei’s unabashed passion for food and boundless appetite was unexpected because in the past female television stars were expected to eat in a lady-like and polite manner. Loralei, however, had no shame in admitting her favourite cuisines included the likes of Pop tarts, tater tots, hot dogs and mini-donuts (and even all in one sitting), but this is exactly what made Loralei’s character so real and relatable.

Although Lorelai’s parenting may come across as unconventional, her breakup advice for Rory was undeniably one of the best TV has seen. Rather than telling Rory to shove her feelings under the rug, she told Rory the best way to move on with her life was to wallow and allow herself to be sad. She of course took it to an extreme, but nevertheless the core message of her advice is strong and insightful to help Rory along through the moving on process.

Lorelai: “Get back in your pyjamas, go to bed, eat nothing but gallons of ice cream and tons of pizza, don’t take a shower or shave your legs or put on any kind of makeup at all and just sit in the dark and watch a really sad movie and have a good long cry and just wallow. You need to wallow.”

Lorelai always finds an out of the box way to say even the simplest phrase. Her love for coffee became a running joke throughout the entire show and it was a rarity to see her without a takeout cup from Luke’s Diner in her hand. Of course, rather than simply saying “I love coffee,” Loralei adds her own hilarious and somewhat vulgar twist onto an otherwise simple phrase to express her undying affection for the caffeinated beverage.

Lorelai: “If it was physically possible to make love to a hot beverage, this would be the one.”

Despite her extreme pride in Rory for working hard and being accepted to Yale, Lorelai still reminds Rory to be lighthearted and enjoy her time away at college. She advises Rory in the most Lorelai way possible to “not get too smart” or in other words, to not get caught up and still make time for leisure activities like shopping. Clearly Lorelai has her priorities straight and the underlying sarcasm apparent in her parenting style is so entertaining to watch.

Lorelai: “Don’t study so much that you get brilliant, go mad, grow a big bald egghead, and try to take over the world, OK? ‘Cause I want to go shoe shopping this weekend.”

Loralei’s quirky charm and hilarious antics became clear from the very first episode of the series. When Rory is just 14 years old she meets her first love interest, Dean. The thought of Rory growing up sends shock waves through Loralei’s system and she completely overreacts in learning about her daughter’s potential new romance. Loralei attempts to confront her daughter, but does so hilariously by assuming Dean is a typical bad boy with a motorcycle, when in fact he is quite the opposite. (Just wait until the real bad boy Jess comes into the picture Loralei!)

Lorelai: “If you’re gonna throw your life away, he’d better have a motorcycle.”

Despite Lorelai’s seemingly laid back and casual parenting style, she definitely does not take Rory dropping out of college lightly. Lorelai starts panicking that Rory will follow too closely in her own footsteps and make the same mistakes she did growing up. This moment showed a different side of the typically lighthearted Loralei and we saw her anger at both Rory and her parents for allowing Rory to veer off course the initial plan the mother-daughter duo made together. Despite Rory’s minor hiatus from journalism, she ends up realizing herself exactly where she belongs and eventually enrolls back in school.

Although the mother daughter dynamic between Lorelai and her mother Emily was never flawless, the two definitely allowed fans their fair share of entertainment with the constant bickering. Whether Loralei actually smelled her mother’s presence or not, the combination of chalking up her mother’s aroma to guilt and Chanel No. 5 is way too perfect. Despite their surface differences and Lorelai’s constant loathing towards her mother, it becomes clear throughout the seasons that Lorelai and Emily aren’t so different after all when it comes to their core values!

Lorelai: “My mother — she was here. I can feel it. Smell that? The room smells like guilt and Chanel No. 5.”

Loralei’s intense sarcasm is a huge part of her charm. She can make even the most dire situations seem less heavy by her sharp humor and one-liners. When her love interest Luke criticizes Loralei, she responds by completely contradicting herself in a purposeful and hilarious way. Somehow she manages to keep a straight face through it all, but we definitely can’t!

Lorelai: “I can be flexible. As long as everything is exactly the way I want it, I’m totally flexible.”

The central plot line of the show revolves around mother-daughter relationships and we see a huge contrast between Lorelai and her daughter Rory’s best friend status in comparison to Lorelai’s own relationship with her mother Emily. Both Lorelai and Emily are aware that Lorelai didn’t grow up to be the classy, elegant woman Emily intended for her to be, and Lorelai uses this misstep for her own amusement throughout the show. Rather than resenting her mother in anger, she uses the bitter relationship to her advantage and pokes fun at herself as the “disappointment” her mother allegedly sees her as.

Emily Gilmore: “You should identify yourself when you answer the phone.”
Lorelai: “Sorry. Independence Inn. Major disappointment speaking. Better?”

Of all of Lorelai’s many quotes, one of our favourites is when she professes her love of snow. She claims she can “smell” when the snow is on its way and we love this quirky tendency of hers. Lorelai is amazing at seeing the silver lining in situations and when Rory conjures up images of thermal underwear, wool socks and ear flaps when she thinks of snow, Lorelai thinks of all the amazing winter accessories. In a time when many people (including Rory) would dread the icy temperatures and wet snow, Lorelai professes her love for it and brings her classic charm and positivity to a dreary situation.

Lorelai: “Everything is magical when it snows. Everything looks pretty, the clothes are great, coats, scarves, gloves, hats.” 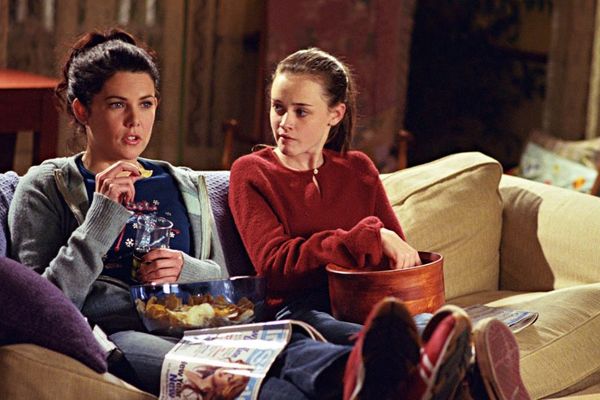