Throughout television history there has been a tradition of creating some truly great holiday-themed episodes and while Thanksgiving, Christmas and even Valentine’s Day have gotten their fair share of episodes dedicated to them, it seems New Year’s episodes are much more sparse. Although there have seemingly been far fewer New Year’s episodes, popular TV shows of recent years have definitely served up some memorable episodes of their characters ringing in a new year. Check out the best of TV’s New Year’s episodes with this list:

Veronica Mars was the kind of show that delivered with every single episode and that included season two’s “One Angry Veronica.” While it was also a great episode, it wasn’t only New Year’s focused as it followed Veronica from the beginning of Christmas break through to New Year’s. While most of the episode centered around Veronica as the foreman of the jury for a case she was summoned to, the best part of the episode happened on New Year’s Eve. Just as Veronica and Keith were settling in for a very subdued watching of the ball-drop, Wallace showed up at their door. As Veronica’s cynicism about New Year’s implying false hope was taking over, Wallace’s appearance changed all of that and suddenly Veronica along with audiences felt all that hope and excitement that a New Year is supposed to bring thanks to the arrival of Wallace.

As Don Draper and the rest prepared to say goodbye to 1967 and welcome 1968 in the season six episodes “The Doorway, Part I and II” there was nothing but excitement and drama, and any TV fan knows that the best episodes are the ones that require two parts. “The Doorway” brought lots of emotions and the best of every character as Peggy had to work and it was revealed that Don was back to his cheating ways. Like any good New Year’s episode, Mad Men‘s “The Doorway” brought fans the hope for change with the knowledge that things often just stay the same, only in a new year.

Every episode of Boy Meets World brought fans a combination of emotions and season three’s New Year’s episode “Train of Fools” delivered everything fans wanted in a big way. Both Eric and Cory are ecstatic for their first New Year’s away from their parents, and Eric can’t wait to show off his supermodel date while Cory is looking forward to his New Year’s midnight kiss with Topanga. In the end, a series of unfortunate events lands the gang on the subway which breaks down, but they turn it into one of the best subway New Year’s Eve parties of all time! The episode celebrated brotherhood, making the best out of seemingly hopeless situations, and solidified that you can celebrate anywhere as long as those you love are close by.

Celebrating New Year’s as a family can be tricky as Modern Family proved with its season four episode “New Year’s Eve.” The classic episode saw Jay take most of his family to a Palm Springs resort that he remembers from his childhood as being incredible, but is now rundown. Meanwhile, the kids are back in L.A. which of course leads to problems of their own. “New Year’s Eve” is a great episode for classic Modern Family hijinks, and loving your family no matter their quirks.

Seinfeld‘s New Year’s episode “The Millennium” was an interesting one. For starters, even though it was holiday themed, it aired on May 1, 1997, nowhere near the Millennium or New Year’s at all for that matter. Regardless the episode brought all the usual Seinfeld debacles from George trying to get fired from the Yankees to Kramer and Newman planning rival New Year’s Eve parties. While it was definitely an entertaining episode, it wasn’t really just about New Year’s and could pass as any other typical Seinfeld episode.

Even Mulder and Scully had time to celebrate ringing in 2000 and while everyone else was worried about Y2K, the pair were busy battling a group trying to raise a zombie army for the apocalypse that was sure to happen as they entered the Millennium. For most fans who had already waited seven seasons for the pair to make a move, the episode was most important because it featured Scully and Mulder’s first kiss as Dick Clark’s New Year’s Rockin’ Eve played in the background. This episode not only somehow worked New Year’s celebrations in with zombies flawlessly but brought some romance to the dark show, making it one of the very best New Year’s episodes and X-Files episodes of all time.

Gossip Girl knew how to rope fans into one heck of a New Year’s Eve episode with season five’s “The End of the Affair?” Through flashbacks, the episode finally answered questions as to what happened after Blair and Chuck’s car accident and why so much had changed. The Spectator’s New Year’s Eve party brought drama, some answers, even more questions and most importantly the Dan and Serena kiss everyone had been waiting for! Ringing in a New Year has never been more scandalous than Gossip Girl‘s addition to TV’s best New Year’s episodes with “The End of the Affair?”

6. Friends – “The One With All The Resolutions”

Friends had a couple New Year’s Eve episodes and season five’s ‘The One With All The Resolutions” was one of the best. Along with the group making resolutions and failing miserably to keep them, the episode included Ross’s iconic leather pants and of course not being able to get them back up after using the washroom. While most will remember Ross’s pants over the New Year’s celebration, the episode also marked Rachel finding out about Chandler and Monica which launched Friends into a whole new year and a whole new storyline.

The Office kept the laughs coming for nine seasons, and through all of the things the employees of Dunder Mifflin went through together, New Year’s was one of the funniest. The season seven episode featured Michael Scott eagerly anticipating the result of Holly giving her boyfriend AJ an ultimatum of proposing to her by the end of the year or losing her, and while most of the episode took place after the fact of actual New Year’s, watching everyone fail miserably at their resolutions was hilarious.

There were some crazy Halloweens and Thanksgivings on How I Met Your Mother, but there was also an epic New Year’s episode with season one’s “The Limo.” Whether you hate him or love him, you have to give credit to Ted for renting a limo for all of his friends so they could hit up not just one but several New Year’s Eve parties. Naturally, the episode was packed with the usual hilarious and off situations the group often found themselves in. From Barney’s “get-psyched” mix to the whole group being robbed by a gun-wielding Moby, it was definitely a New Year’s Eve to remember.

Few shows bother with a New Year’s themed episode, but what makes That ’70s Show’s New Year’s episode stand out even more was it wasn’t just any other episode — it was the series finale. With December 31, 1979 coming to an end, the episode was emotional as fans knew everything was about to change as characters said goodbye to the ’70s and fans said goodbye to the show. It was the perfect way to wrap up a series based on a specific decade and was bittersweet as Donna and Eric were reunited and Kelso (Ashton Kutcher) even made his return to say goodbye. “That ’70s Finale” is without a doubt one of the best and most iconic TV New Year’s episode as it marked the end of one of the TV’s most popular shows.

Nothing says New Year’s Eve like a rich kid’s party in the luxurious penthouse of the Four Seasons, and as a result “The Countdown” has become not only one of the most memorable New Year’s TV episodes, but one of the most memorable The O.C. episodes as well. The arc with Oliver came to a pinnacle this episode, as did Ryan and Marissa’s relationship as he rushed to get to her before the clock struck midnight. There was no better way to say goodbye to 2003 than with Marissa declaring her love, and Ryan finally showing his feelings while getting her away from the evil ways of Oliver.

As one of the most iconic television shows of all time, it isn’t surprising that Friends has some of the most iconic holiday episodes as well. With all the buzz around the Friends’ Thanksgiving episodes, some others don’t get the credit they deserve and that includes season six’s “The One with the Routine.” In the episode Monica, Ross, Joey and Janine attend the set of Dick Clark’s Rockin’ New Year’s Eve, and the main goal to get on the televised platform is only attainable by Ross and Monica doing their eighth-grade talent show’s dance routine. The episode is hilarious, and makes you want to dance, making it the perfect New Year’s episode. 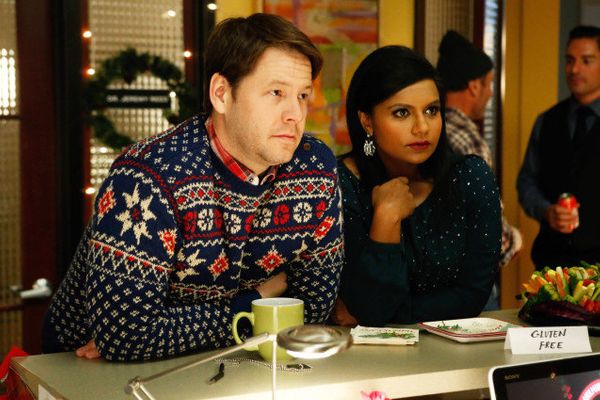