It’s a new year in the land of General Hospital (GH) with so much opportunity on the horizon. What kind of drama will 2022 bring? Will there be unexpected character returns? Will Peter finally get nailed? Will Maxie and Louise be reunited? Fans just love to speculate on storylines! As such, below are some GH plotline predictions for 2022.

12. The Truth About Louise

The truth about Louise will likely be exposed over the coming weeks. The walls are closing in on Maxie, BLQ and Chase. Tracy’s in the know, and it’s only a matter of time before Felicia will figure things out. There’s also a good chance that Peter will overhear the truth by accident. When he finds out he’s been lied to, August will snap.

Peter could find out that Bailey is Louise and snatch the baby. He’s cunning, so he will easily come up with a plan to escape guards and take the child. The bad news is that he’ll likely be on the run with Louise for at least a couple of weeks. The good news is that the Port Charles heroes and heroines will eventually bring Louise back home.

There will probably be a showdown between Peter August and Robert, Anna and Valentin. Hopefully, the baby will be in the safe arms of Maxie at this point, but knowing GH, Louise could be in harm’s way. Would Peter threaten to hurt his own child? He is Cesar Faison’s son. August will likely pass away during this showdown, in a manner that will convince everyone he’s gone for good. But naturally, his “passing” will leave a door open for a potential return.

9. Maxie And Austin Get Closer

It’s official: Maxie likes Austin and Austin likes Maxie! They won’t jump into romance right away, but they’ll get closer and closer as 2022 progresses. Once the truth comes out about Louise, Austin will better understand Jones’ friendship with BLQ. The only problem with the truth coming out about Bailey/Louise is that Brook Lynn will be cut off from the child she took care of as her own.

There may be some conflict between Maxie and BLQ when this happens. Jones will be ready to move on and bring Louise home, after Peter is out of the picture. BLQ, on the other hand, will be heartbroken. Sure, she’ll be happy for Maxie and proud of herself over what she sacrificed for the baby; however, she’ll miss little BLQ 2.0. She’ll likely become down in the dumps, as will the rest of the Quartermaines. Although Brook Lynn will be seen in a new light amongst friends and family, some issues could arise between her and Maxie, as Jones tries to build a bond with her daughter. Louise may even be fussy with Jones. She’ll miss BLQ and her old family, too. It’ll be hard for all three to navigate through this. But Maxie will have Austin to lean on, and Brook Lynn will have Chase.

7. Anna And Valentin Solidify Their Romance

It’s only a matter of time before Valentin and Anna become a bonafide couple. This is great news; however, Cassadine is headed down a slippery slope. Now that he knows he’s officially a member of the infamous Greek family (again), with daddy Victor in the picture, he may slowly get into bad habits. Seeking revenge against BLQ is one thing that Anna won’t agree with, even if the truth about Louise doesn’t come out. This could place a wedge between them.

6. Victor Is A Bad Influence

Victor will become public enemy #1 in Port Charles, now that Peter’s gone. He’ll intimidate Laura and Drew, as well as anyone else who dares to cross paths with him. More importantly, he’ll become a terrible influence on his son. Valentin’s come a long way, and he’ll finally have the woman of his dreams by his side. Valentin’s relationship with Victor could ruin things for him.

5. Sasha Falls Off The Wagon

Considering everything she’s been through and losing her baby, no one would blame Sasha if she fell off the wagon. That doesn’t mean the character isn’t headed for another heartbreaking storyline ahead, as she grieves the loss of her son. This isn’t something a mother can just fluff off and move on from. The first half of 2022 will be a hard one for Sasha. She may even push Brando away; however, he’ll be persistent, and he may help her overcome these demons. Could the summer of 2022 hold a wedding for these two?

It doesn’t look good for fans of #TeamCarSon right now. While Sonny’s trying to keep his marriage intact, his lies and feelings for Nina are jeopardizing his relationship with Carly. Mrs. Corinthos is not taking this lightly, and the two are headed for a break. They likely won’t get divorced, but it’ll give Sonny an opportunity to fully explore the feelings he has for Nina. Sonny and Nina will become a thing and may even stay together for the rest of 2022.

GH has been hinting at different relationships for Drew as of late. There were slight sparks when Cain encountered Maxie; however, with her thinking about Austin as of late, this won’t go anywhere. There’s always Sam, but does that relationship seem too obvious? Drew’s other ex is Elizabeth, but she’s clearly moving forward with Finn. Could Carly navigate towards Drew as a friend, and get a little closer to him as 2022 progresses?

Some days, it feels as if Hayden could return at a moment’s notice. Her name is brought up a lot! It’s clear she’s on her way back and should pop up sometime this year. With Liz and Finn on the cusp of making a real commitment, Barnes will likely return during a sweeps month; probably February or May. She’ll come back to find her sister with her ex, acting like a mom to her daughter. She should feel warm and fuzzy about Liz taking care of Violet, but “warm and fuzzy” are the last two words that will describe Hayden’s feelings about the situation. Let the games begin!

1. Lulu Awakens From Her Slumber

Lulu’s awakening from her coma is another guarantee for 2022. Dante and Sam are bonding and getting along great. There’s a good chance he’ll pop the question this year or they could decide to officially move in together. Will Lulu awaken before Sam and Dante tie the knot? Will she stop the wedding, or will Sam and Dante say their “I do’s” only to find out that Rocco’s mom is back in the land of the living? 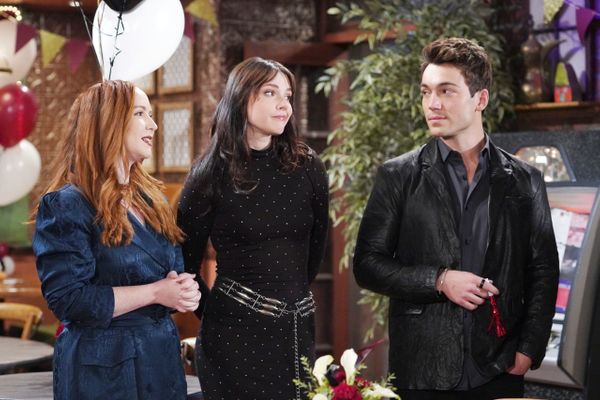